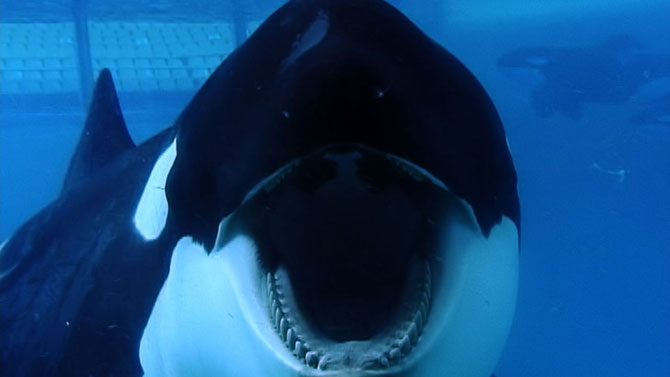 BLACKFISH (PG-13) There is no attempt at masking the anger at the core of Gabriela Cowperthwaite’s documentary, Blackfish. The movie begins ostensibly as a crime procedural: On Feb. 24, 2010, the killer whale Tilikum killed SeaWorld trainer Dawn Brancheau by thrashing her in the enclosed water tanks, submerging her deep under the waves and subsequently crashing down on her and eating portions of her body. This wasn’t the first time that Tilikum had killed. But what Cowperthwaite makes a case for—angrily at times and always convincingly—is what propelled Tilikum to act out as he did. What begins as a crime story quickly shifts into something far more complex, fascinating and emotionally troubling.

Tilikum’s history of violence stretches back to the early 1990s, when the whale killed his trainer at a shoddy tourist attraction called Sealand of the Pacific in Victoria, British Columbia. The whale later killed again in 1999, when he drowned and mutilated a homeless man named Daniel Dukes, who had gained entrance into the SeaWorld facility after closing hours. What Cowperthwaite examines so brilliantly in Blackfish is how Tilikum’s aggressive behavior can arguably be traced back to his captivity at Sealand of the Pacific, where he was kept in severe isolation when not trained to entertain the dwindling crowds. Even after he grabbed the ankle of trainer Keltie Byrne and killed her at the park, Tilikum was eventually snatched up by SeaWorld to perform for the millions of tourists who flock to their amusement park every year. Tilikum was also used and valued for breeding purposes. Despite his aberrant behavior—no killer whale has ever been known to attack or kill a human being while in the wild—Tilikum was viewed as a desired specimen for SeaWorld’s breeding campaign.

Through interviews with some of Brancheau’s SeaWorld colleagues and with marine scientists familiar with killer whales and Tilikum in particular, the film mounts a devastating (yet always compelling) attack against keeping these amazing creatures in captivity for our amusement. Blackfish is one of the best documentaries released this year and one of the most troubling. SeaWorld representatives refused to be interviewed for the movie. They have reason to hide.