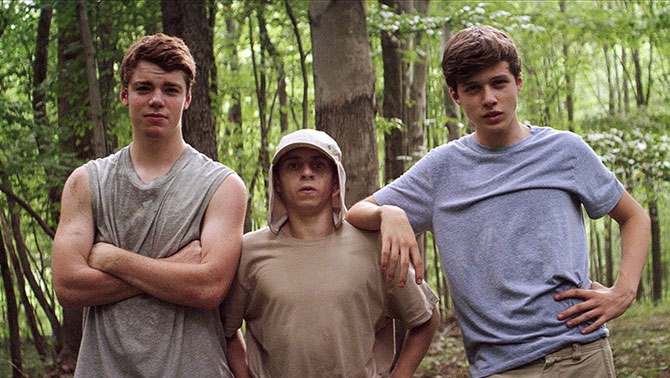 The first feature from director Jordan Vogt-Roberts and screenwriter Chris Galletta is not in that pantheon of masterful movies. But it does carry with it a bevy of hilarious moments and a surprising dose of sweetness and melancholy, mixed in this tale of three teen boys yearning to extricate themselves from the supposed tyranny of parents and who desire to make their own way into the world as men. It knowingly riffs off ’80s cinematic touchstones like Stand By Me and more recent movies such as Superbad, but finds its own loose tone and irreverent emotionalism.

Nick Robinson plays 15-year-old Joe Toy, a thoughtful yet fretful teen living with his widowed father Frank (Nick Offerman). Frank is loving yet strict toward his son, but when he forces Nick to play Monopoly like they used to do as a family, the game eventually turns ugly. Nick later conspires with his best friend Patrick (Gabriel Basso), who is also frustrated with his doting yet clueless mother (Megan Mullally) and father (Marc Evan Jackson), and their weird friend Biaggio (Moisés Arias). The boys build a makeshift home in the forest and strive to become men of action in the “wilderness” of Ohio, hunting for game (hilariously unsuccessful), attempting feats of courage (punching each other on the arms as hard as they can) and trying to go native as best they can. Their attempt at remaking themselves as wild, rugged men of action is thwarted, however, when Nick’s potential love interest, Kelly (Erin Moriarty), ventures into Neverland and usurps the tenuous balance.

The Kings of Summer is modest in its intentions, always shaping its story of boys-to-men within improvisational comedy and deadpan observations. Though as it moves along, sparks of poignancy do shine through, and the movie transforms into a genuine, wonderful surprise. Make sure to stay past the end credits.