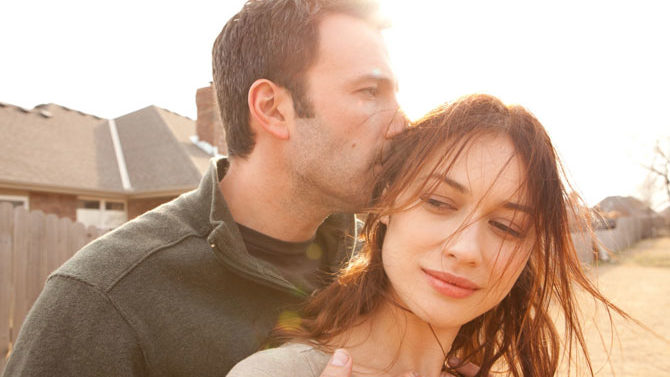 TO THE WONDER (R) An American abroad (Ben Affleck) falls in love with a woman (Olga Kurylenko) in France. He brings the woman and her daughter back to Oklahoma, but their relationship is tested. She goes back to Europe and he falls in love with an old girlfriend (Rachel McAdams). Their love frays too. Meanwhile, a priest (Javier Bardem) in Oklahoma undergoes a crisis of faith.

Is there any living film director better at evoking the numinous than Terrence Malick? Throughout his career, Malick has challenged audiences with questions regarding how we engage or reject the presence of divinity in the world. By the time the reclusive (by Hollywood standards) director returned after a 20-year sabbatical with his masterful World War II epic The Thin Red Line in 1998, he examined how some could catch a glimpse of the numinous in the most unlikely of places—a battlefield—while others felt only the agony of its absence. It was also the movie where Malick embraced his penchant for poetic voiceover and visual lyricism like never before, evolving his film grammar to a richer level.

To the Wonder is similar to The Tree of Life, in that it strips plot to its skeletal requirements and plunges us into a sometimes-powerful emotional state due to its luscious cinematography (courtesy of Emmanuel Lubezki), use of classical music and sophisticated editing patterns. While Malick heavily relies on interior monologues rather than actual dialogue to convey his thematic concerns, much of the movie’s real power is purely cinematic—how that precarious mix of shot selection and editing rhythm miraculously heightens our awareness toward meaning.

For anyone unfamiliar with Malick’s work, To the Wonder is not the movie to start with. The opening scenes (set in France) feel like a self-parody, and Malick dutifully employs his bag of stylistic tricks with gusto. You wouldn’t be reprimanded if you mistakenly thought you were watching an overlong fashion commercial with beautiful people cavorting in beautiful places signifying only a director’s pretensions. But once Malick repositions the movie in Oklahoma, To the Wonder begins to shape into something more interesting. Concrete, crass advertising billboards and fast food joints surround his characters now. This is a landscape seemingly void of the spiritual, and it’s the lack that haunts the most. Is this a lesser Malick work? Yes. But saying that is like pointing out that Beethoven’s “Symphony No. 6” is a lesser work. Ultimately, it’s still damn good.