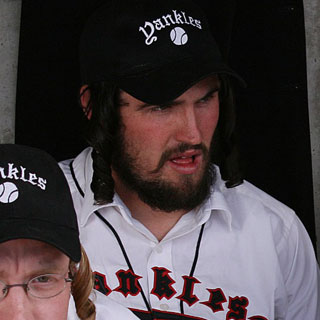 Arty Farty: When 50/50 came out, it looked like one of those Hollywood comedies that I’d want to see: a character-driven, reasonably intelligent, more than halfway dramatically serious but still irreverent mainstream film with a talented, appealing cast and a director (Jonathan Levine) who’d risen from the indies (most notably, 2008’s The Wackness, which had its charms). In short, it was aimed at people more or less like me, who are fairly discerning moviegoers who still hold out plenty of hope that there’s quality left to be wrung out of traditional, popular approaches to filmmaking and are always happy to see the old formulas being used in novel ways and working well. There are a lot of us; like the main characters in 50/50, we’re mostly well-educated, live in cities and are open to creative or artistic pursuitsâ€”or at the very least, we’re not generally hostile to the idea of creating art.

I watched 50/50 on DVD last week, and I’m not going to go into too much detail about what works in it and what doesn’t; Derek Hill already did a nice job of that in these pages back in November, when the film was in theaters. But I will say that, while I’m never surprised when a Kevin James film takes the position that artists are clueless, self-absorbed twerps and the things they produce are blatantly obtuse, pretentious nonsense, I am a little taken aback when a film with the assumed demographic constituency I described above goes as far out of its way as 50/50 does to make that point.

This film isn’t content to cast its requisite shrew, Bryce Dallas Howard (the clueless, self-absorbed twerp who, for some reason, is the girlfriend of the cancer-stricken protagonist, Joseph Gordon-Levitt) as a particularly bad yet apparently professional painter. Nor does it stop at following Gordon-Levitt’s bromantic true love, Seth Rogen, to a gallery opening into which he has stumbled after a blonde, where the reg’lar guy guides us on a good-naturedly bemused tour of a bunch of inscrutably awful modern art. 50/50 isn’t done until Rogen and Gordon-Levitt have cathartically destroyedâ€”with knives, a hatchet and a flame-throwing aerosol canâ€”a horrifyingly ugly canvas the miscreant Howard has left behind when summarily dismissed by Gordon-Levitt.

Maybe the malice toward art and artists is just a manifestation of 50/50‘s general disdain for taking what one does seriously. The only medical doctor given any amount of screen time in this film about the treatment of a potentially terminal illness is an absurd caricature of callous detachment. Therapist-in-training Anna Kendrick is completely ineffectual when she tries to do her job by the book; it’s only when she becomes inappropriately involved with Gordon-Levitt that she does him any good. And the happy-go-lucky Rogen, who works with Gordon-Levitt at a Seattle public radio station, likes to do stories about things like where to find the best burger in town. Gordon-Levitt is working on a meaty story about a volcano in Hawaii, and he gets cancer.

So, yeah, maybe that’s the message: Lighten up! Seize the day! Live a little! Quit being smart! I don’t get it, but what I really want to know is, why am I supposed to? 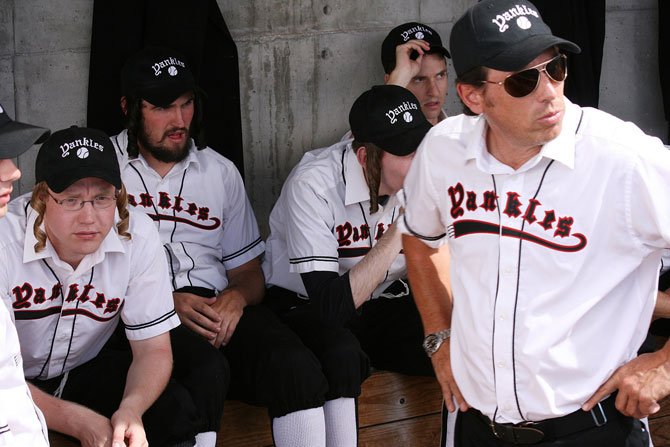 “The Yankles” will open the Athens Jewish Film Festival Feb. 11 at the Georgia Museum of Art; the festival moves to the Morton Theatre after that.

AJFF Returns: The 2012 Athens Jewish Film Festival begins this weekend with a gala opening at the Georgia Museum of Art at 6:30 p.m. Saturday, Feb. 11, followed by an 8 p.m. screening of The Yankles, David R. Brooks’ 2009 comedy about an on-the-outs ballplayer who takes the helm of a baseball team of orthodox yeshiva students. Ten more films (including a program of shorts) will be screened over the next three days at the Morton Theatre; each film will be preceded by a special introduction. You can get the full schedule and lots more info at www.athensjff.org. This is always a terrific, popular and really well-programmed festival, so it’s more than worth checking out, whether you’re a member of Athens’ Jewish community or not.

More Festivals and Series: The EcoFocus Film Festival is scheduled for Mar. 23â€“31, and has recently extended its deadline for sponsorships. If you’re someone who wants to help support a great, locally grown festival that’s dedicated to fostering awareness and action with regard to environmental issues, go to www.ecofocusfilmfest.org to see how you can helpâ€¦ Speak Out for Species is holding its 7th annual Animal Voices Film Festival Mondays at 7:30 p.m. this month in Rm. 102 of UGA’s Miller Learning Center. The Feb. 13 screening is A Fall From Freedom, a documentary about the captive whale and dolphin entertainment industry. Find out more at www.sos.uga.edu/filmfestâ€¦ The next screening in the ICE-Vision series, Thursday, Feb. 9 at 8 p.m. in Rm. S150 of the UGA Lamar Dodd School of Art, is Ifâ€¦, Lindsay Anderson’s marvelous 1968 film about an armed uprising at a British boys’ school. Find ICE-Vision on Facebook for more info.

And Then There’s CinÃ©: The next Bad Movie Night, Wednesday, Feb. 15, will be Beaks: The Movie, which series programmer Michael Baringer describes as a “silly killer birds disaster.” I’m hookedâ€¦ Don’t miss Let the Right One In director Tomas Alfredson’s Tinker Tailor Soldier Spy, as well as Athens’ only theatrical runs of Shame (See Movie Pick), Steve McQueen’s sex-addiction drama with Michael Fassbender, and Aki Kaurismaki’s universally acclaimed Le Havre, all playing through Feb. 9, but no promises after that.