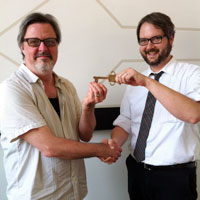 When I told Pete on the eve of my last day that it’s been two years and nine months, we both gaped. It just doesn’t seem like that long, but it’s true: Ben left Nov. 1, 2009, and I was here, sharing his office for a month before that, poking around the insides of Athens politics for the first time. It was scary and thrilling. The design for the Washington Street parking deck was about to be approved, and there were a bunch of smart, involved Athens people who had gotten organized (too late) to try to stop the local government from going through with a plan that seemed to them like a big mistake that would move downtown in a direction that was at odds with its distinct, well established butâ€”in the face of half-block high-rise developmentsâ€”fragile personality. I didn’t know what the hell I was doing, but I ran after it and started talking to people and writing about it.

The concerned citizens lost on that one, and it wasn’t really closeâ€”the decision had been made a long time before, and re-examining it wasn’t really an option. But we had a progressive Athens-Clarke County Mayor and Commission, and it seemed clear that they had a pretty good handle on downtown planning and the rest of what needed to be dealt with here: crushing poverty, environmental concerns, forward-looking infrastructural decisions, economic development, cultivation of the arts.

And of course, there was an election going on. It was a big one, too. We didn’t give much thought to the state legislative racesâ€”one of our Democrats, Keith Heard, was basically locked into his seat, and the other, Doug McKillip, was part of the fabric of progressive Athens. Nobody even bothered to run against him. What we were worried about was who our next mayor was going to be, and why in the world the District 5 Commission race was getting so nasty. (That may have been the single most dramatic lesson I learned on this beat: a political campaign on any level can get sleazy at the drop of a hat. The least dramatic one was that local politics is about 75 percent focused on planning issues.)

By the time the election was over, we’d elected a mayor who looked considerably less progressive than the previous one, but the commission was basically intact. We figured the leaders on the commission would find ways to take the reins of the government a little more than they had before, so that the priorities they’d set over the preceding several years wouldn’t be abandoned. We also found out shortly after that election that we had one fewer Democrat in our legislative delegation than we thought. Doug McKillip’s party switch was galling, but not many people thought it would have much of a practical effect around here. What was one more Republican in a legislature already dominated by Republicans? Sure, Doug was cynically looking out for himself, but it wasn’t like he was going to turn on his own constituents.

We all know how that last thing turned out. As for the first, it’s difficult to see where the commission has taken much of a leadership role during the first year and a half of Mayor Nancy Denson’s term. To be fair, the commissioners had their hands full for about six months with McKillip’s aggressive redistricting play, which not only accomplished the remaking of Athens-Clarke County’s system of government, but also monopolized the attention of our elected officials and activist citizens for the protracted duration of the controversy. And it left in its wake a prevailing atmosphere of exhaustion in Athens’ progressive communityâ€”one that may have begun before the last election cycle and has conspicuously thickened during the current one.

That fatigue, if I properly perceive it, is a problem that could metastasize as it emboldens those with something to gain from it. The Democrats, unbelievably, couldn’t come up with a candidate to offer even a symbolic challenge to McKillip after he slapped them around, and are now left with no better choice than to muster support for his opponent in the Republican primary, Regina Quickâ€”an honest and honorable person who nonetheless, politically, cannot be mistaken for anything other than a conservative Republican. Want more? A career operative for the Republican Party and big business will run unopposed for our local public school board because no one else could be bothered to qualify for a vacant seat. It seems unthinkable that this could be the reality in a town like Athens, so renowned for its unabashed liberal activism, but it’s where we are. And the longer the progressives stand down, the harder it’s going to be for them to get off the deck.

The other side isn’t getting tired, because they’re trying to make moneyâ€”and it’s working. That’s really the flipside to progressivism in our day: the unapologetic elevation of unfettered profit-making to the highest moral standing, and the denigration of the public interest as the domain of profligacy and sloth, if not outright theft.

This is not an exaggeration, and it’s not confined to national politics. When our state Legislature puts a referendum on the ballot that, if Georgians can be tricked into passing it, will allow an unelected state commission to license for-profit “charter” schools without the consent of local school boards and then support them with tax money that would otherwise go to public schools, that is prioritizing private gain over the public good. And the same opposition is in play when a wealthy and well-connected developer attempts, through an expensive, misleading and divisive PR campaign, to pressure local public officials into altering regulations intended to protect community interests in order to facilitate the construction of an inappropriately scaled and located shopping center. Money is a much more powerful motivator than civic duty: to perform the latter, you really have to want to. I sincerely hope our beloved, progressive Athens recovers from its bout of lethargy in time to preserve what makes it great, and with enough energy to address the ills that continue to plague it.

So, here I am, using my final column as Flagpole city editor as a platform for yet another long-winded, moralistic rant. Could it have been any other way? Despite all my consternation, it’s been a great pleasure and a greater honor. You’re in Blake’s able hands now, and I expect he’ll keep you better informed than I ever have. But you’ll have to supply the action yourselves.