Cute Girl Less Fun When Nice: A while back, when I first decided to devote the opening segment of this column to a brief (or not so much) discussion of the last movie I’d seen, whatever it was, I think I mentioned that that might sometimes prove an embarrassing proposition. This is one of those times. See, what happened was, I was in the kitchen working on something, as I am now, on a recent weekend afternoon, while Mrs. Film Notebook was watching something on the big TV in the adjacent room, or dozing there, maybe. I kept catching bits and pieces of what was on; it sounded like a romantic comedy with extremely frank sexual dialogue between the leads, laced with some unambiguously R-rated vulgarities.

Naturally, I was intrigued. I stumbled across it later that evening and watched it. Turns out the film I’d been half-enjoying from the other room was Love and Other Drugs, a “funny/dramatic” romance with Jake Gyllenhaal and Anne Hathaway (and Oliver Platt! And Hank Azaria!), set, oddly, amid the healthcare economic sector at the mid-90s dawn of Viagra (it was tough to know whether Pfizer had paid a boatload for “promotional considerations”: the drug company has a pervasive presence, but it’s not shown in a very good light). Turns out he’s an unscrupulous young hotshot drug rep, and she’s got early-onset Parkinsons – and the emotional pain associated with that is making her mean. Turns out she’s not as much fun once you get to know her, kind of like the movie, which, it turns out, was co-written and directed by Edward Zwick, which is never a good thing. Needless to say, Annie and Jake are both, it turns out, really nice people once they grow to accept their mutual love. The less said about it, the better.

Sad News: Word came down last week that Video Link, a mainstay of local, independent DVD rental, is closing its doors. Its proprietor, Link Souter, has spent decades supplying Athenian film lovers with a well chosen and always interesting selection of films on home video, first as the longtime manager of Video Library, and for the past several years at his own store, which is now selling off all its stock at bargain prices. The closing of Link’s shop is just another illustration of how strange, difficult and unpredictable a time this is in all areas of film viewership (see below item), and especially for independent video stores. All the more reason to make it a point to support the ones we have left, which basically amounts to Vision Video now. Good luck, Link – we’ll miss you.

Hail Mary Pickford?: Speaking of the radically shifting landscape of film viewing, Julia Marchese of L.A.’s New Beverly Cinema, a revival house that screens a new double feature of classic movies pretty much every other day, has started an online petition urging the major film studios not to cease distribution of archival 35mm prints. Because 35mm films are difficult and expensive to store and ship, major studios are discontinuing rentals, which will make repertory screenings just about obsolete. That’s an absolute disaster for the many, many people who understand that watching a projected film print in a theater with an audience is the way movies are truly meant to be seen; if you’re one of those (and if you’re reading this column, you should be), go online and sign the petition at www.thepetitionsite.com/1/fight-for-35mm. I don’t know if it’ll do any good, but the chances of it getting somebody’s attention improve with each signature. 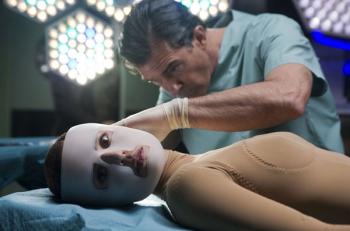 Antonio Banderas and Elena Anaya in Pedro Almodovar’s The Skin I Live In, opening Friday, Nov. 25 at Ciné.

Cine Action: One of the things being put together by Cine’s programming committee (which I’m on) is a film noir festival projected entirely from 35mm prints, hopefully in early 2012. Obviously, given the circumstances described above, that will be an opportunity not to miss; in the meantime, though, there’s plenty coming down the pipe to get excited about. Opening Nov. 25 is Pedro Almodovar’s The Skin I Live In, which reunites the director with Antonio Banderas and sounds like a cross between Eyes Without a Face and, um, an Almodovar film… On Dec. 2 comes Lars Von Trier’s Melancholia, which despite the director’s amazing behavior upon its debut at Cannes earlier this year sounds like it may be his best film. That will serve as the next installment in the Director Spotlight Series, with my fellow programming committee member and UGA Film Studies grad Matt Noller introducing it Tuesday, Dec. 6… Margin Call, which looks fantastic, is scheduled to open Dec. 9, then in January we get Polanski’s Carnage, Cronenberg’s A Dangerous Method and Aki Kaurismaki’s Le Havre, for which the critical praise has been as enthusiastic and as unanimous as any film I can remember in the past year or so… It bears mentioning that Cine is still in the midst of a membership drive as it prepares for its transition to full nonprofit status in January. So, if you’re not a member and think you should be, go ahead and sign up now. You can find details on the new membership packages (along with trailers and more info on the films listed above) at www.athenscine.com.