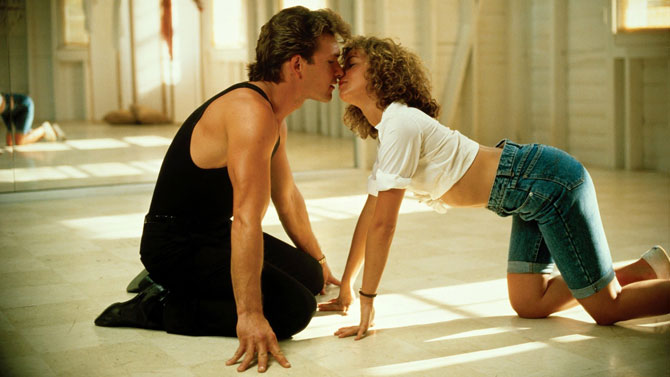 Summer romances provide fond memories for many people, especially that one kid in your junior-year English class who totally had sex with a girl on vacation. (She’s from Canada. You wouldn’t know her.) For a taste of summer romances that feel slightly more honest, catch the ’60s-set Dirty Dancing at Beechwood on Mar. 12 and 15 (showtimes at gtcmovies.com), and then jump forward to 1987—from the comfort of your couch—to see Jesse Eisenberg and Kristen Stewart meet cute at an amusement park in Adventureland.

DIRTY DANCING (1987) The term “social justice warrior” did not exist when Emile Ardolino’s Dirty Dancing was released, but Jennifer Grey’s protagonist Frances “Baby” Houseman fits the bill in the best possible ways, decades before 4chan was using the moniker as an insult. Her plans for the future include college and the Peace Corps—right after a summer vacation in the Catskills with her wealthy family. During her three weeks at the Kellerman’s resort, she shows her progressiveness by lamenting famine in southeast Asia, helping a woman secure an abortion despite the taboo of the times, and pouring a pitcher of water on the crotch of an Ayn Rand-quoting creep.

Baby’s openness is tested when she is drawn to a man from a less privileged world—the resort’s dance instructor (and sometimes gigolo) Johnny Castle, played by Patrick Swayze. The audience meets Johnny from Baby’s point of view. She is hidden in a hallway, spying on a meeting between the resort’s employees and its owner. The fashionably late Johnny strolls through the meeting as the image of a handsome greaser—slicked-back hair with shades and the leather jacket requisite for being anti-authority in film. The camera assumes Baby’s perspective by intercutting shots from her vantage point with shots of her standing in the doorway. The film approaches Johnny with the same regard as this worshipful teenager, sweeping the viewer up in the excitement of their courtship.

Years before inflicting Zac Efron on the world as the director of High School Musical, Kenny Ortega’s choreography bridges the gap between highbrow and lowbrow. Johnny and his fellow resort staff dance eloquently for guests, but move with abandon at their nightly happenings. These two social groups meet when Johnny begins teaching Baby how to dance.

A training montage is most noteworthy for its repeated shots of the couple’s feet. Baby’s white Keds trample and break rhythm with Johnny’s black dress shoes, until they eventually synchronize to the Delilah-friendly strains of Eric Carmen’s “Hungry Eyes.” As their movements gradually harmonize, the audience sees the basis for their relationship forming. Through this shared experience, Baby and Johnny unite their very different worlds with style and charisma that can win over even the most cynical viewer.

ADVENTURELAND (2009) While Dirty Dancing sees love blossoming in a mountain resort surrounded by natural beauty, the romance in Greg Mottola’s Adventureland grows in the most depressing place to be young during the summer: one’s hometown. After intellectual virgin James (Eisenberg) graduates from Oberlin, he grudgingly takes a summer job at the Adventureland amusement park in his hometown of Pittsburgh. He befriends fellow carnival worker Em (Stewart), who quickly becomes James’ sort-of girlfriend. That “sort of” status comes courtesy of Adventureland’s handyman, Connell (Ryan Reynolds), who, although married, is having an affair with Em.

Watching Adventureland alongside Dirty Dancing makes it clear that, via Connell, we are seeing a very possible future for Johnny Castle. If Swayze’s dance instructor continued relying on his looks without fostering his talents or passions, he could also end up trapped in a dead-end job and marriage. In fact, Mottola introduces Reynolds’ character in a way almost identical to the first time we see Johnny. Connell strolls through a crowd wearing shades and a leather jacket; the camera shows him from James and Em’s perspective, likewise framing the character as an idol.

Adventureland primarily focuses on James’ coming of age, but Reynolds is the reason to watch it. The actor’s signature wise-ass style is on display in spades, but in this case it functions as overcompensation. Mottola and Reynolds are unafraid to make Connell seem genuinely pathetic, sneaking into his grandmother’s basement for adulterous affairs and inventing a jam session with Lou Reed to impress throngs of teenage girls.

As James says goodbye to Connell at summer’s end before going to win Em’s heart, the unspoken truth between them is palpable. While James has the opportunity to move onto bigger and better things post-Adventureland, Connell is stuck in a rut, whether he continues working at the amusement park or not.