At the Eating Insects Athens Conference, Bugs Are What’s for Dinner 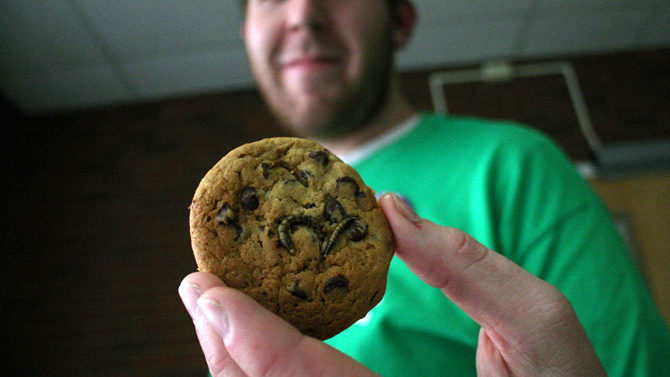 Recently, Athens played host to hundreds of farmers, researchers and chefs, who convened to learn from one another and support the latest movement in sustainable eating—entomophagy. It’s a big word that means eating insects, and the three-day Eating Insects Athens conference last month represented the rising insect agriculture economy and an increased interest in the U.S. in exploring alternative food sources.

The conference was put on by the North American Coalition for Insect Agriculture, whose mission is to “foster collaboration amongst stakeholders and create a consolidated voice to encourage the positive growth of insects as both feed and food.”

UGA entomologist Marianne Shockley is an NACIA founding member and helped to host the conference. Supporting insect agriculture in Georgia just makes good business sense, she said, and Georgia is already in the thick of it.

The state is home to several small insect-agriculture operations. In fact, Armstrong Crickets, a farm in Glenville, about 60 miles west of Savannah, was the first cricket farm to get Food and Drug Administration approval to sell its crickets for consumption. “The fact that a Georgia-based company is in the lead of the big players in this farming space is huge,” Shockley said.

One of the topics threading through the sessions was the issue of terminology. “The words that we use, we have to be intentional about,” Shockley said. “Even the term ‘edible insect’ makes it seem like they’re mostly not edible. It creates this gray area, like why would I want to eat an edible insect?”

American skepticism about entomophagy is to be expected, anthropologist Julie Lesnik said in a keynote lecture. Though humans have been eating insects dating back 1.8 million years, she explained that as groups moved away from warm, equatorial climates, insects were replaced in the diet. Western culture just doesn’t have the same history of eating bugs as groups whose ancestors came from, say, the Amazon.

As a result, eating insects is often considered disgusting and uncivilized by people in Western countries. To that, Lesnik said, don’t yuck my yum. “Disgust is learned,” she said. “‘Yucking’ is othering a large population on Earth”—the millions of people who continue to rely on insects like termites and ants as a nutrition source.

Shockley herself has devoted her career to educating students and community members about eating insects through outreach events, and she often makes insect treats to share with the crowd. She works mostly with crickets, mealworms and chapulines, a type of Mexican grasshopper commonly used in Oaxacan cuisine.

Through his New York-based restaurant, Brooklyn Bugs, chef Joseph Yoon is on a mission to change perceptions about eating insects. Diners, he said to conference attendees, eat with their eyes first, so “we have to show the food beyond the insect.” Yoon scrolled through slides picturing beautifully displayed plates of fried chicken sliders breaded with cricket powder, ants on a log with real ants, and an amuse-bouche of wagyu beef with uni and Japanese wasp.

Full disclosure: He had me until I saw the wasp. I happen to be very, very afraid of wasps, and the idea of popping one in my mouth gave me chills.

That’s OK, said Shockley. Not everyone is ready to jump whole hog into eating every kind of bug. At outreach events, she’s not trying to convince anyone to eat insects, but to open their minds to the idea that insects simply offer an alternative source of food.

“I want to stress we’re not wanting to flip the dynamic,” she said. “We’re wanting another tool in the toolbox, another ingredient that can come to the table.”

But she does believe the movement is gaining. Her outreach events have shown her that. “Most of the time, it’s not the first time people have been exposed to [eating insects]. There’s already a connection,” she said. “I couldn’t say that 10 years ago.”

The next chance to sample insect fare is coming up. The annual Insectival takes place at the State Botanical Garden of Georgia on Saturday, Sept. 15.