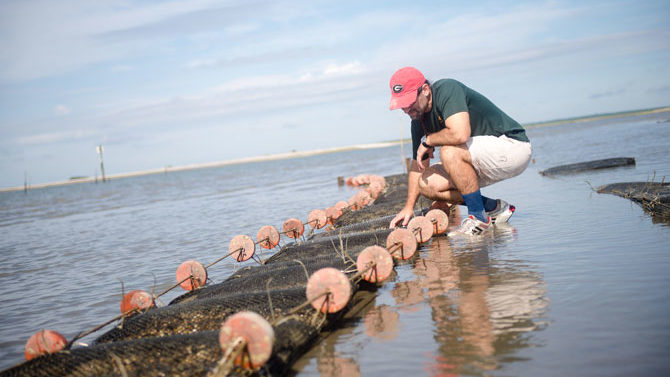 When you think about where good raw oysters come from, do you think of Georgia? Tom Bliss thinks you should.

“Georgia has really healthy and productive waters, and we have an excellent wild population here,” he says. He would know. Bliss directs the University of Georgia’s Shellfish Research Lab on Skidaway Island near Savannah, and his lab has been helping to revive Georgia’s oyster industry.

Just as peaches, poultry and peanuts have historical and cultural roots in Georgia, oystering has been part of the coastal economy for over 100 years, says Bliss. In fact, at the turn of the century through the 1940s, Georgia was a leading producer for canned oysters.

“The canning industry side died out, I think, by the 1960s. Most of it had just run its course because eating canned oysters had fallen out of favor,” Bliss says. “Since then, it’s just been a very localized part of the coastal culture.”

Now, Bliss says the Georgia oyster industry is poised to make a comeback. “In the last few years, more and more restaurants are wanting to have a larger diversity of oysters on their menu. There definitely is a demand right now for good oysters to serve at raw bars,” he says.

Local favorite Seabear has been eager to add Georgia oysters to the menu. “If we could have Georgia oysters on year-round, we would,” says chef Patrick Stubbers. “They always sell well.”

Seabear has been an active supporter of UGA’s efforts to boost the industry since its start. The restaurant sponsors the shellfish lab’s annual oyster roast, which funds equipment purchases and student internships. Locally, Stubbers says the staff at Seabear works to educate anyone who comes in on the different origins and flavors of oyster species, so they’ll be ready to embrace local varieties.

Georgia oysters, he says, carry the smell and feel of Georgia’s inner tidal area. “They could be a great starter oyster, because they’re very salty. Every one I’ve had has been high-brine, which is very cool.”

Bliss says restaurants in Atlanta and Savannah have been in touch, too, but right now the supply is limited. To meet the growing demand, his lab is piloting new methods of cultivating the type of oysters preferred by raw bars.

“Wild oysters, since they’re limited for space, grow tightly packed together. They’re what we call cluster oysters, and they’re not easily harvested for sale at a raw bar,” he says. The lab turned its attention to oystering in the last 10 years, working to get oyster aquaculture—cultivating oysters versus harvesting wild ones—established.

The lab recently added a hatchery to help speed up oyster production, and it’s been growing oysters from larvae since 2015. It works a bit like growing vegetables from seed into starter plants. The hatchery will raise the oyster larvae until they are about 1 to 5 millimeters in size, then they go to local shellfish farmers who finish raising them until they’re ready for harvest. The whole process takes a little over a year.

Bliss is adopting techniques and gear, like floating cages and bottom cages, which are commonplace in states with oyster aquaculture. But Georgia’s regulatory codes don’t currently approve the use of this type of gear, because the codes regulating the oyster industry were intended for wild oystering.

Working with state agencies to change these codes is a top priority. More and more shellfish farmers in Georgia and others from outside the state are wanting to enter the industry, says Bliss, but the industry can’t expand without updated codes.

Bliss is ready for the day he can visit a restaurant in Savannah and see a sign advertising fresh Georgia oysters. “The science is there. The biggest hurdle is regulatory at this point,” he says, but luckily there is momentum to make regulatory changes, though the time frame remains unclear.

Once aquaculture gets the OK from the state, however, all signs point to a true revival of Georgia seafood. Between the support of restaurants and a motivated farmer base, it likely won’t be long before oyster fans in Athens have a new local option to slurp down.