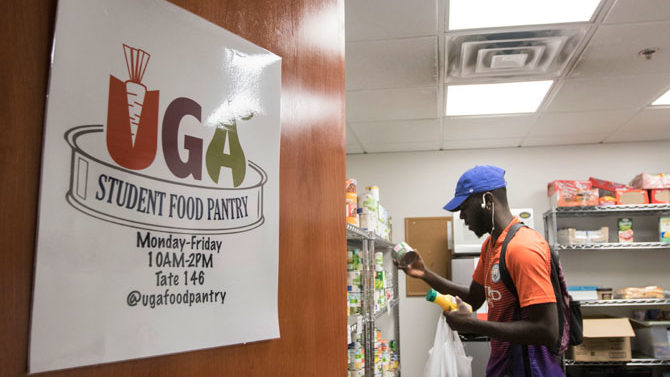 One night not long into her freshman year at the University of Georgia, Julianne Miao and her roommate, Nathalie Murphy, found themselves going for a late-night bite at a campus dining hall. As the staff was cleaning up and preparing for the next day, they noticed that a lot of food was being thrown out.

“We thought it looked like really decent food that we would have loved to have stored in our dorm room if we could,” says Miao, “and that started a conversation about how our university could better utilize our resources to help people who are food insecure.”

After a bit of research, the pair stumbled upon the Food Recovery Network, a national student-run organization that recovers perishable food from campus dining halls and redistributes it to food-insecure members of their communities. Miao and Murphy decided to co-found a chapter at UGA, but they soon learned that the dining halls already donated any usable food to another charity called Full Plate. In fact, the more the two kept digging, the more hunger-focused organizations they found on campus and in the community.

But Miao saw an opportunity to help an often overlooked group: food-insecure college students. For three years, the Food Recovery Network at UGA has been recovering food from Trader Joe’s and The Fresh Market to supply a student-run food pantry at the Tate Center. Each day, Miao or one of a rotating crew of volunteers will pick up food—usually items like premade meals, pasta and bread—to deliver to the pantry. In total, the process takes about an hour and a half.

Miao admits that before she started researching hunger, she wouldn’t have expected a fellow classmate to fall into that category. If someone’s in college, she remembered thinking, how can they be food insecure? But the more Miao thought about the “crazy expensive” meal plans, the more it made sense.

Hunger is becoming a pervasive issue across college campuses. National Public Radio recently reported that almost half of college students surveyed in recent studies say they don’t get enough to eat or worry about food. Though food insecurity tends to affect mostly community colleges, it’s still an issue at four-year public schools.

UGA Student Affairs estimates that 7,000 students are food insecure. These tend to be students who fall into the gap between what their financial aid covers and the total costs of attending school. Four years ago, the university launched a scholarship program called Let the Big Dawgs Eat for students who struggle to access and afford daily nutrition.

The Food Recovery Network at UGA has a specific aim to provide healthy food options, says Miao, because often, the cheapest food options are highly processed convenience foods or fast foods, which are high in fat, sodium and sugar. “We as an organization are trying to target that,” she says. “We’re not trying to provide just any food to these students, but options that are actually good for them.”

Soon, it will be time for Miao and co-founder Murphy, both seniors, to pass the torch. Their goal this year is to recruit and train the next group to take over.

Before starting the organization, Miao says she didn’t know much about food insecurity, but she soon realized how the issue can be misunderstood. “We expect food-insecure people to be really skinny and underfed, but it’s merely the fact that you have to stretch a penny sometimes,” she says. Volunteering with organizations like the Food Recovery Network or others around campus can help dispel myths and assumptions about issues that go beyond the Arch. “There are so many organizations on campus that do similar things, and we all find our own niche.”

Almost one in four people living in Athens is food insecure. “It’s such a tricky topic,” says Miao. “It’s bigger than two college girls can take on, but I think, especially somewhere like Athens-Clarke County, where food insecurity is an issue outside of our UGA community, it’s important to be aware when you’re living in a bubble.”

To learn more about the Food Recovery Network at UGA or volunteer, reach out on Facebook or find it on UGA’s Involvement Network service portal.