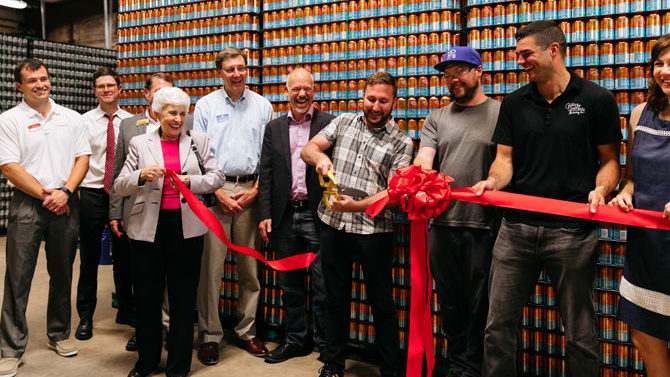 At the end of May, the Trump Administration announced that it would impose tariffs on imported steel and aluminum from three of America’s biggest trade allies: Mexico, Canada and the European Union.

The move prompted criticism and worry from a number of manufacturers, but one industry’s concerns quickly bubbled to the top. The likes of Anheuser-Busch and MillerCoors were quick to point out that the 25 percent tax on steel and 10 percent tax on aluminum imports would hurt brewers across the country.

Athens brewers are concerned as well. Creature Comforts CEO Chris Herron has already seen can prices go up this summer, “and that seems consistent with what we are hearing from other breweries,” he says. “Any time we get increases to our raw materials, we are concerned.”

Craft brewers have increasingly turned to aluminum cans over bottles as the demand for craft beer and the need to distribute it more widely has grown. Most brewers do some amount of filling and packaging on site and purchase the cans from suppliers.

Industry leaders predict tariffs may lead to job loss throughout the production chain. Writing for the Beer Institute, economic analyst John Dunham estimates that these tariffs may hike the cost of beer production by $350 million a year and put 20,000 jobs at risk.

Watts says cutting employees at Terrapin is possible, but unlikely. “If we opted to not price increase, then we have to reduce costs in some other fashion, and if it’s not going to be in raw materials, then it’s going to be in people, pencils and rulers,” he says, “but I don’t see us being in that type of position. For Terrapin, that’s 100 percent last-ditch effort. I’d rather see 50 cents more on the shelf than lay people off.”

Bob Pease, CEO of the Brewers Association, has publicly opposed the tariffs, concerned that the move—which, according to the administration, was an effort to protect jobs—could cut the legs out from under the craft brewing industry just as it is hitting its stride.

But Herron isn’t so sure the tariffs will stop craft brewers in their tracks. “We deal with increases to our cost of ingredients pretty regularly across all kinds of items, and although we prefer for it not to happen, it is part of doing business,” he says.

Herron doesn’t anticipate that the tariffs will impact Creature Comforts’ ability to operate, though it does have an impact on margins. Watts, too, doesn’t see the tariffs putting a halt to any of Terrapin’s current operations or future plans, but he knows the real question for Athens consumers is what they’re paying for local favorites. “That’s the big concern, right?” he says. “Everyone’s like, ‘Does this affect what I pay for beer?’”

Industry advocates argue that an increase in the cost of these materials will result in more expensive beer, but Watts thinks it’s too early to tell what will happen. “With all the tariff pieces that are happening, there’s a good chance that the global state of beer, not just Terrapin or Creature or Southern [Brewing Co.], but all beers would see a price increase for the consumer,” he says. “But we’ll have to wait and see.”

Bottom line, Athens brewers are ready to roll with the punches. Herron says it’s just business as usual. “Things happen all the time across all aspects of the business that we have to react to, and this is not materially different than any number of challenges we face,” he says. “In comparison to the rapidly increasing price costs of hops or health insurance, this is relatively small.”