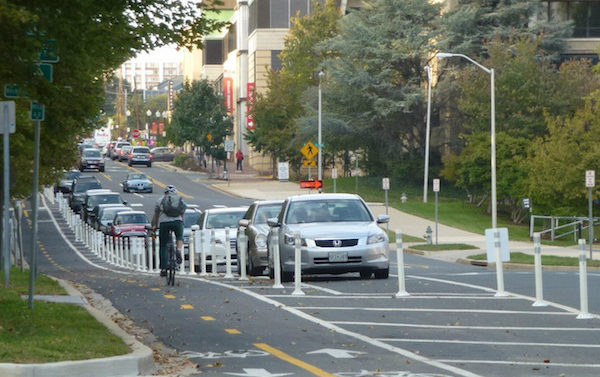 Athens-Clarke County commissioners are expected to vote tonight on plans for removing one car lane from four-lane Barnett Shoals Road south of College Station Road to make room for a two-way protected bike lane when the road is repaved.

The new configuration would be tested for 30 days before being made permanent. But two Eastside commissioners, Andy Herod and Sharyn Dickerson, don’t even want to test it. They have proposed replacing a sidewalk with a multi-use path instead. BikeAthens recently posted an article explaining why that’s a bad idea.

A bike lane protected by bollards is just as safe as one separated from the road, according to BikeAthens, and significantly cheaper, because the pavement for a protected bike lane already exists, but a multi-use path would have to be paved at a cost of $1 million per mile.

In addition, the protected bike lane would run along the east side of Barnett Shoals, where the Green Acres-Crestwood subdivision is. The multi-use path would run along the west side, forcing cyclists to cross the street to get there—not an easy task with no mid-block crosswalks.

Piggybacking off the BikeAthens article, Complete Streets Athens urged citizens to look at both the Barnett Shoals and Boulevard-area bike-lane plans in the context of the 20-year Athens in Motion bike/pedestrian infrastructure plan. Unfortunately, Athens in Motion isn’t yet finished, but with Barnett Shoals up for repaving and a separate analysis of Chase Street recently completed, the commission is considering those plans in a vacuum.