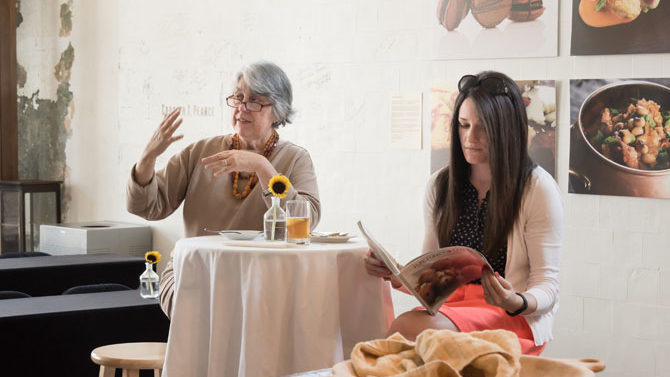 Her discoveries may have been news to outsiders, but Athens foodies who saw the article probably weren’t surprised. This is a town that embraces food and drink, the more local the better. Our love of local food supports two farmers markets, two CSAs, a grocery co-op, two coffee roasters, five breweries and several bakeries, not to mention the number of restaurants serving up local products. Yet, despite the many articles floating around touting the Classic City’s culinary prowess, our food culture can feel overshadowed by Athens’ renowned music reputation and, obviously, Georgia football.

That may change, however, after a recent visit from New Orleans native Liz Williams. As president of the National Food & Beverage Foundation and director of the Southern Food & Beverage Museum, it’s safe to say that Williams knows her way around food cultures.

The National Food & Beverage Foundation takes a holistic approach to food and drink. Since everybody eats, food culture can “reveal the state of the world.” The Southern Food & Beverage Museum tells the story of different food cultures through objects, which, says Williams, was missing in conversations about food in 2008, when the museum was founded.

“One of the important things, I think, for historians is that there are the artifacts,” she says. “For example, if you cook a stew in a big cast-iron pot over an open fire, and you have to lift that pot and deal with the fire, you have a totally different impression of cooking in the 19th Century than a person who just reads, ‘it was heavy, hot, sooty,’ whatever it may be.”

Williams wasn’t sure what her first trip to Athens might reveal about our city. Already scheduled to present her new book about the history of cocktail culture in New Orleans at the Decatur Book Festival, Williams found her way to Athens in September by way of an invitation from local resident Becky Ford. “I knew that [the food scene] must be pretty good, because I got the impression that Becky wanted to show it off,” Williams says. “I definitely wasn’t disappointed.”

Williams was treated to a whirlwind of a tour, stopping in at Little City Diner in Winterville, White Tiger, The National, home.made and Condor Chocolates. She sat in on a slow food meeting, sampled Georgia wines and even gave a reading from her book over daiquiris and Sazeracs at Ciné. Williams will be the first to admit that there was more to see and eat, but her 48-hour venture yielded a handful of notable discoveries.

She was especially surprised to learn that Jittery Joe’s is growing its own chicory root. “Of course, as a New Orleans native, that impressed me,” she says. Chicory coffee is a staple in New Orleans cuisine, and chances are if you’ve had chicory coffee, you had it there.

Another thing that impressed Williams was the strength of Athens’ appetite compared to its size. “Considering how small Athens is as a town, it had a very robust and in-depth food culture, which I thought was very exciting,” she says.

Perhaps more important than any verbal praise, Williams took a few pieces of Athens food culture back to New Orleans. If you find yourself roaming through the exhibits at the Southern Food & Beverage Museum, you may spy a knickknack from Jittery Joe’s or Condor.

While these items alone can’t represent the breadth of our food culture, it’s nice to know a little piece of Athens is included the story of Southern food the museum seeks to tell. Of course, Williams isn’t finished collecting. She will return to Athens, she says, excited to sample another taste.