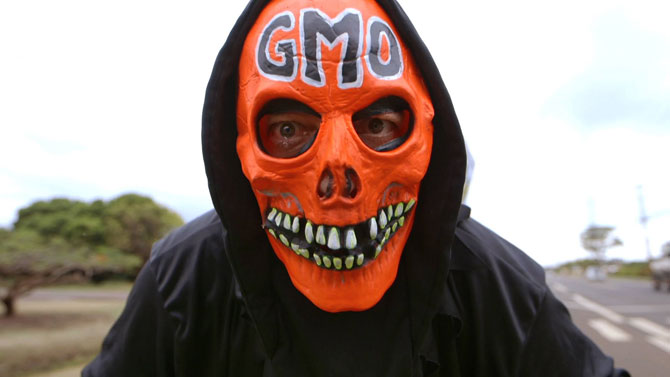 What do you think of genetically modified organisms? Are they good or bad? Those are the type of simplified, and sometimes divisive, questions documentary filmmaker Scott Hamilton Kennedy wants to challenge.

Kennedy was a unique guest speaker at the UGA Plant Center’s annual symposium on May 9. Hot on the heels of completing his latest film, Food Evolution, Kennedy spoke to a crowd of plant scientists and shared how he pursued the various angles of the GMO controversy—science, politics, activism and business—only to find that the truth is complicated.

“The GMO controversy was just waving its hands, saying this is a story that’s not being told correctly,” said Kennedy. “It deals with huge issues in our food system, from feeding the most who have the least, to corporate greed and issues of monopolies and things like that. But it didn’t seem like the full story was being told.”

Kennedy will be the first to admit he’s not an expert on genetic modification, but he’s become very informed. He hopes his film will help shed some light on the less understood sides of the GMO debate.

UGA plant biologist Jim Leebens-Mack hopes so, too. That’s why he worked with Kennedy to organize a screening of Food Evolution at Ciné in addition to presenting at the symposium.

“In Athens, there’s a lot of concern about people not taking the scientific perspective on things like global warming, environmental sustainability and so on,” said Leebens-Mack, but GMOs are one issue where science takes a backseat to fear.

Genetic modification, also known as genetic engineering (GE), has been in practice since the early 1990s, when herbicide-tolerant corn was introduced. Today, more than 90 percent of the corn, soybeans and cotton grown in the U.S. are genetically engineered, and the Genetic Literacy Project estimates that 70 percent of the foods we buy contain GE ingredients.

GE foods have become a bogeyman, says Leebens-Mack. Like the mythical monster, fears surrounding genetic modification are ill-defined. Leebens-Mack often hears that it’s just not natural. His perspective is different.

“As an evolutionary biologist, I know that nature has been imposing genetic modifications on plants throughout their evolutionary history,” he said. Scientists use genetic modification to promote traits within a plant that growers want, whether that’s resistance to certain herbicides, drought, bacteria, insects or pathogens. For example, a virus-tolerant variety of Rainbow papaya has saved Hawaii’s papaya industry from ruin. That is one of the many scenarios where GE plants have obvious benefits that Kennedy explores in his film.

Leebens-Mack wants the film’s viewers to understand that GE technology and GMOs are not inherently good or evil. Kennedy observed that the decision to grow GE crops or organic crops depends on what’s right for each farmer.

For the record, the scientific consensus is that GMOs do not present any health risk to animals or humans. Of course, there are arguments that go beyond safety and health. Kennedy and Leebens-Mack both acknowledge that GE technologies have been used by Big Ag to improve commodity crop yields.

“It doesn’t have to be either/or,” he said. “There are wonderful things that we have and will continue to learn from organic farming, and there are amazing things that are being done by very smart people that want to save the planet… in a sustainable way on the science side.”

Rather than make blanket claims about GMOs, Leebens-Mack wants to community to “start having more rational conversations about genetic modification and how it can be a useful tool for sustainable agriculture.” The potential for corporate monopolies and corruption, the environmental and social impact of GMOs—these may be valid concerns, says Leebens-Mack, but “let’s do a better job of articulating our concerns and then try to work through those.”