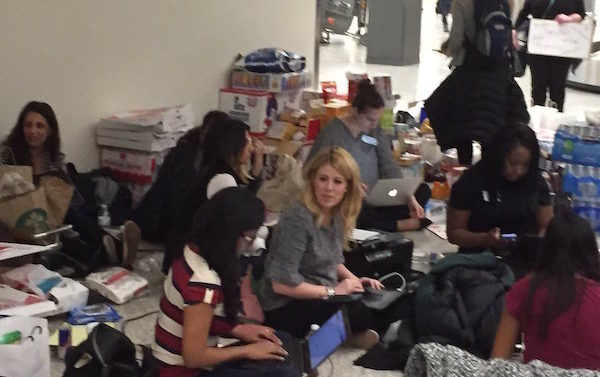 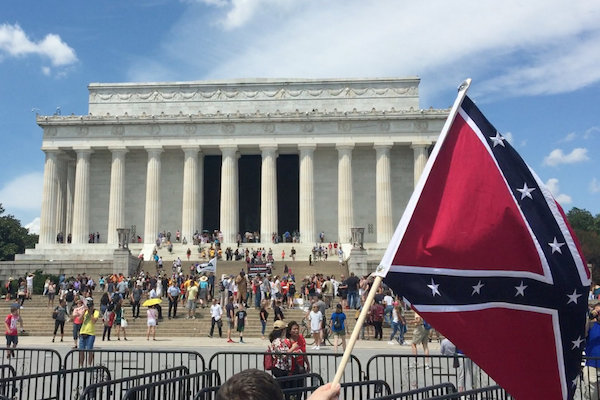 “Can I get some sunscreen?” one young Nazi asks another young Nazi near the Lincoln Memorial where the alt-right’s “Free Speech” rally—the more edgy of two right-wing rallies scheduled for the same time in Washington, D.C. on June 25—is about to kick off.

The second rally, which is supposed to be “against political violence” splintered off from the first once alt-right figurehead Richard Spencer was invited. Spencer and his supporters call Mike Cernovich, Jack Posobiec, and the other viral right-wingers leading the competing march “alt-light” because they are less openly racist and mostly fall in line with Trump.

Who these “free speech” Nazis are specifically—their names, where they came from, the specifics of their beliefs—doesn’t matter, and many don’t call themselves Nazis, but that doesn’t matter either. (FWIW, they prefer “tribalists” and/or suggest white pride is like black power or whatever and shouldn’t be a big deal.)

The Nazi in need of sunscreen eventually gets some from a Baby Huey-like Nazi wearing a baseball helmet, holding “Join, or Die.” flag. Bounding up the steps past Baby Huey is neo-Confederate Jason Kessler, who waves a Confederate flag and yells that Lincoln was a traitor in the direction of D.C. United Against Hate’s nearby counter-rally.

“The South will rise again,” someone snickers.

“Bill Clinton is a rapist!” another yells.

And then, a bunch of ostensibly grown-ass men, all part of Identity Evropa, a white Nationalist group, most in white polos and khakis and at least one—an older guy in a motorcycle helmet—sieg heil-ing, arrive with synth-pop of the foggy faded sort playing from portable speakers.

A few of the Identity Evropa guys are Spencer’s bodyguards—and their presence signals that he has arrived, which means the media gathers for an impromptu pre-rally Spencer presser.

Spencer tells cameras that he is “not a white supremacist.

“I don’t want to rule over other races,” he says. He is just worried about whites “not having a safe space for their families.”

And unlike the alt-light, Spencer says, he isn’t blindly for the Donald: “Donald Trump has been very disappointing, and I am very worried about his presidency. He can obviously redeem himself in my eyes, but whether or not he’s going to do that, I’m skeptical.”

Spencer’s entering his paunchy Elvis phase, it seems, dressed in a white suit (with black buckled shoes truly deserving of a “What are thooooooose?”), sporting long-ish sideburns, big dumb Ray-Bans, and looking a bit bloated. He is a slightly better talker with cameras in his face, which let him be more oppositional than he is during the actual speech, where his speaking style is best described as diet, caffeine-free Dwight Schrute from “The Office” channeling Mussolini.

“The most radical thing for anyone to say is, ‘I am white, my life has meaning, my life has dignity, I am part of a family,” he says to the crowd of 100 or so. He adds, as though he’s filibustering through an SAT prompt, “Free speech really matters, and this is why we are here today.”

There is so much bad faith and cognitive dissonance here, and the DC police are trying to keep everyone separated, not allowing the Nazis to get too close to the DC United Against Hate rally a little closer to the Lincoln Memorial , and moving DC United Against Hate attendees, including one woman in a wheelchair, away from the Nazis, a presumably wise decision, but also one that offers up a false equivalency between the two groups.

A stronger stance is taken by a Parks and Rec volunteer who silently leaves three Internet-y Nazis hanging after they want to shake his hand and “thank him for [his] service,” they say.

We’re all soaking in it out here—the 4chan-ing, Reddit-residing, Pepe meme-ing, racist, anti-semitic, alt-right to which Trump is at least adjacent to or making coy goo-goo eyes at. (Did you see Eric Trump’s got the Nazi haircut now?) That its face, Spencer has become a meme himself, someone who, when he shows up, bloviates about white supremacy and then often gets bopped in the face or glitter-bombed, which is then GIF’d makes sense: the internet’s demands will always devour you. Right now, Spencer’s virality is shrinking because it turns out, he’s got this horrible sincerity that won’t make him last—he is like Mike Pence or something, someone who actually cares, truly believes his bullshit, whereas it is the “alt-light,” Cernovich and Posobiec who are super cynical like Trump or Mitch McConnell, goofy grandstanders, needling nihilists.

Then, Spencer’s speech gets loosely inspirational: “The real challenge is within ourselves. We are the ultimate censors of free speech. We aren’t willing to be honest even when we are alone. There is a black cloud that hangs over whites around the world.”—he says, really going for it here, referring to white guilt. Yes, the black cloud is white guilt.

Today, Spencer’s another racist doofus and he is far less entertaining than say, internet ding-dong and former Buzzfeed employee who goes by the name Baked Alaska who gives off Guy Fieri vibes and whose  tone is bro-running-for-high-school-class-president.

The culture wars of the early ’90s have only recently entered Baked Alaska’s radar—his story is he became alienated working at Buzzfeed and was confronted by culturally sensitives millennials— so he bemoans “SJWS” and political correctness and tells the crowd they’ve been blind to what’s been going on and it has to end.

Not far away, closer to the Lincoln Memorial, the collection of liberals, folkies, leftists, and peaceniks discuss Richard Collins III, a college student murdered for being black, nod to the deaths that are imminent under Trumpcare, and chant “Nazis out!”

“I actually got suspended from Twitter for a week,” he says, noting/boasting it was because he shared a “Gas chamber meme.” The audience laughs and cheers (they booed when he mentioned Buzzfeed, though). During his speech, he also makes a joke about being part of “Generation Z”—Z here for Zyklon B, the cyanide used during the Holocaust.

Meanwhile, tourists here to see DC on a sunny Sunday have no time for the alt-righters. Some confront and debate them and police move them away quickly. One man with his family chuckles, and calls them Nazis, shocked but also unimpressed.

One of them is dressed like a Hitler Youth—or a bizarre Hot Topic cosplay version. Everything about him is slack and clean rather than orderly.

The rally wraps up quickly following Spencer’s speech. Identity Evropa get in formation and leave. One guy from the group smiles and shoots another sieg heil at photographers. Some have helmets on and one keeps fucking with a mouthguard. It seems as though they are on a mission and at times they pick up the pace to a march-jog along the DC sidewalks away from the memorial.

Then they stop at a Metro station escalator, ride it down, and pull out their Metro cards to go home. Safety in numbers it seems, that’s all it was. No grand statement or action or confrontation. That’s what all of this is: an expression of bewildered fear, an excuse for failure, a way to be a part of something, anything, all hating together.

Their leader, Richard Spencer didn’t join them on the Metro. He jumped into a rental car not long after his speech ended more than an hour ago.

The Brixx Space Has a New Tenant, and More Chains Cometh