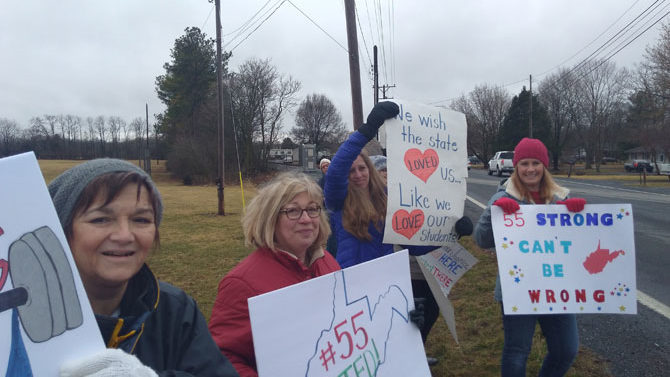 West Virginia’s monumental wildcat strike has given a big signal boost to Save Our Schools Arizona, the next high-profile organizing effort against the destruction of public schools.

As with all good organizing efforts, the team behind SOS Arizona may seem a little rag-tag. There’s an English professor, a fifth grade teacher, a retired Petsmart CEO, another retiree from Microsoft and a consultant for youth summer camps. And then there’s Dawn Penich-Thacker, another English professor who, before she taught, was an Army officer and serves as the group’s spokesperson.

“Four of us have kids at home ranging from 5 years old to 17 years old, and the two retired folks have adult children long gone from the house,” Penich-Thacker says. “Some of our children attend public schools, and some attend charter schools.”

These are just facts, but pointed ones: The people that make up SOS Arizona are multitudinous, regular, mired in public education and management. They’re far different than the elected, deregulation-friendly ghouls running Arizona and Trump Secretary of Education Betsy DeVos, who has accelerated the death of public education for most so that a few have more “school choice.”

“We see chronic neglect or in some cases outright assault on public education in the state,” Penich-Thacker says. “Neglect in that over $1 billion that was cut from public education a decade ago during the recession has never been restored, and indeed our governor and legislature have expanded the number of tax cuts that make restoring the education budget all but impossible without robbing Peter to pay Paul.” (Editor’s note: Georgia is in a similar boat.)

That SOS Arizona counters “choice” rhetoric and voucher schemes via a fairly slick website, an organized “team” and on-point, unforgiving talking points is as much of a sign of where the fight over education and labor is going as West Virginia’s bolder, scrappy, game-changing efforts. Further mobilized by West Virginia as well as Oklahoma (where a walkout on Apr. 2 seems nearly guaranteed), SOS Arizona announced a Day of Action for Mar. 28 and anticipates thousands at the capitol in Phoenix to “give lawmakers a visual, physical sign that their constituents demand solutions to a statewide issue that is at crisis level,” Penich-Thacker says.

SOS Arizona has been battling deeply insincere, pro-voucher Republican Gov. Doug Ducey for awhile now. Teachers in Arizona have some of the lowest pay in the country, the state’s near the bottom nationally in per-pupil spending, and charter schools are considered public schools, though they’re allowed to be far less regulated.

DeVos’ approach to schools is a familiar Republican move: Defund something public so that it doesn’t work anymore, declare it broken and shut it down. What is different about DeVos, at least amid the know-nothing Trump regime, is a smiling, magical thinking sort of neoliberal nonsense. In an infamous “60 Minutes” interview last week, she discussed “investing in students” rather than “institutions,” which sounds good but means little—equal parts meme-ready inspiration and Orwellian doublespeak. Recall that DeVos referred to historically black colleges and universities as “pioneers” when it came to “school choice,” ignoring the founding of those schools as a daring, necessary response to white supremacy.

“There are constant individual and class-action lawsuits in Arizona around charter schools that discriminate against students on the basis of income, disability, academic ability, religion and more,” Penich-Thacker says. “None of this is new or sudden—it’s all been at least a decade in the making, all while millions and millions of tax dollars have been funneled out of the general fund for public education and into private school tuition organizations and voucher programs.”

West Virginia, Oklahoma and Arizona organizing at the same time as massive student rallies against gun violence is a moment in which public schools reenter the organizing vanguard. Post-Parkland walkouts and a wildcat strike in West Virginia represents another victory for those advocating breaking the rules and being ungovernable.

Union activist Lois Weiner observes that public educator mobilization also counters simplistic “red state” narratives maintained by places such as the New York Times who, post-Trump, have bent over backward to talk to anybody whose politics are fascist-adjacent or just plain suck (see: the Ohio dork who has shut off the news because he doesn’t like Trump) all the while mostly ignoring the biggest labor story in years happening in those red states they admit they woefully under-covered.

“The Times just carried an article that portrayed [West Virginia] as a deep red state. And I think that that is a really dangerous, misleading oversimplification about the politics,” Weiner said last month. “And the walkout shows that—the walkout and the fact that West Virginia voted for Sanders in the primaries.”

Oklahoma is also a state Trump won that went for Sanders in the Democratic primary. In Arizona that’s not true—Trump won, Clinton took the Democratic primary—but that shows how organizing and labor concerns related to education are potentially a uniting force for fed-up leftists and cautious liberals alike. Two more “right to work” states floating strikes should be a far more heartening victory than right-of-center Democratic clod Conor Lamb’s special election win in Pennsylvania.

“West Virginia shows Arizona what may become necessary and what it may need to look like,” Penich-Thacker says. “Again, no one in Arizona is eager to strike, but I can tell you that teachers from West Virginia have reached out to us via social media to offer guidance, and we’re appreciatively taking good notes.”