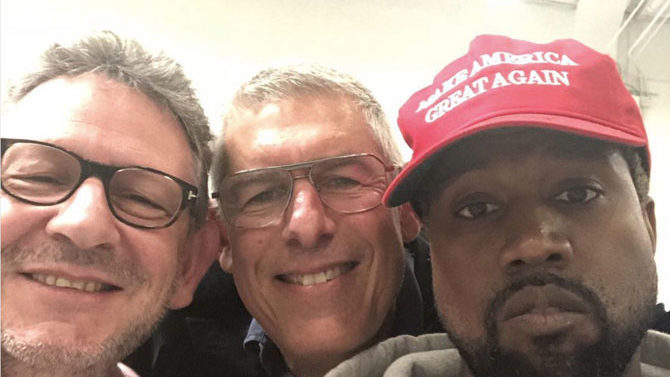 When Kanye West took to Twitter to post a photo of himself in one of those dog-erection-red “Make America Great Again” hats, that was kind of the end right right there.

Or the end of the end. The rapper—who for more than a decade had merged a kind of political, underground rap sensibility with David Bowie-like art-pop—first veered right in 2016, when he dyed his hair blond and met with Trump. Over the past few weeks, however, his resurrected Twitter account has become a kind of red-pilled hot mess of bad faith arguments culled from 4chan and the dank armpits of Reddit threads and YouTube channels and presented under this loose, critique-proof construct of “free thought.” Ideas such as how slavery “looked like a choice” to him are just West riffing, wondering where’s the harm in siding with racist alt-lighters adjacent to fascism and and allowing them use your celebrity and platform to spread their terrible ideas?

Rich people are all crazy. Making lots of money is a sickness, and it isolates you, curdles your thinking and makes you very, very cold. West’s heel turn is only a shocker because, while, sure, he has been a rich, obsequious contrarian for a while now, his music is also a grandiose testament to confusion and occasionally, strong truth-to-power talk. The son of a college professor and a former Black Panther, West resisted his parents’ legacies and struggled to live up to those legacies, too, sometimes on the same song and always through a baroque version of boom bap, the sound of empowered, conscious, aware hip-hop since its early ’90s golden era.

We should also remember that AmeriKKKa intends to drive its visionary black artists crazy and eat them alive: Lauryn Hill, Dave Chappelle, Kanye and, if some of the confessional paranoia on DAMN. or that recent New Yorker profile are any indication, perhaps Kendrick Lamar or Donald Glover soon enough. It is a no-win situation black popular artists walk into, especially when they locate a sweet spot between being successful and politically engaged. At that moment, everything they do becomes “for the culture,” and they will lose eventually, in the eyes of either The People or the corporations paying them. Going half-Nazi is a different response surely.

When Cardi B stomped through her video for “Bodak Yellow” with an anarchy symbol appended to her dress, nobody really cared. The anarchy symbol she wore was an accoutrement, clearly, a fashionable pose that framed the stripper-turned-Instagram-star-turned-reality-show-star—who, it turns out, is one of the most entertaining, empathetic and best rappers around—as an anarchic disruption, a fist to the face of popular rap.

Around the same time that West went Trumpie, Cardi went on a rant in an interview with GQ about Franklin Delano Roosevelt. “This man was suffering from polio at the time of his presidency, and yet all he was worried about was trying to make America great—make America great again for real,” she said. “He’s the real ‘Make America Great Again,’ because if it wasn’t for him, old people wouldn’t even get Social Security.”

It was one of many tossed-off, on-point political observations Cardi B has delivered amid her ascent over the past year or so. At the MTV Video Music Awards in the fall, Cardi declared, “Colin Kaepernick, as long as you kneel with us, we’re gonna be standing for you, baby! That’s right, I said it!” She has taken to Instagram to tell her fans not to bully, and, after Hurricane Maria, posted to Twitter a video of a room full of supplies and commented, “Look what the strip club I used to work at collected for Puerto Rico.”

Cardi wasn’t trying to make a big deal out of any of them, though her FDR love was quickly picked up by progressives. Bernie Sanders retweeted the account Social Security Works, which turned Cardi’s observation into a shareable image and declared, in a tweet and then a short video, “Cardi B is right. If we are really going to make America great we need to strengthen Social Security so that seniors are able to retire with the dignity they deserve.”

Unlike West, who is willing to bend over backwards for some Trump love, Cardi hasn’t done much to cosign Sanders. And there is the profound Sanders hypocrisy in voting for the SESTA/FOSTA bills, which punish websites promoting sex-work ads and will push sex work further underground, while glomming onto a former stripper’s statements on Social Security—but hey, what else is new.

The entire right wing is as stupid as Kanye West has become. Far worse than West is Ross Douthat of The New York Times fusing his Catholic, joy-free, moralistic nonsense about sex and where the culture’s headed with the philosophy of so-called incels or “involuntary celibates”—violent sexists like Alek Minassian, who in Toronto last month drove a van into a group of people, killing 10, including eight women, for revenge against all of the women everywhere who he believes should have sex with him but won’t. In Douthat’s piece, “The Redistribution of Sex,” he defends incels’ beliefs, calling them a “respon[se] to the logic of late-modern sexual life,” and imagining a future in which “sex would be more justly distributed than it is today.”

This is Douthat free-thinking. Someone with the privilege—in this case whiteness, maleness and economic comfort—to turn lives and agency into something theoretical, abstract, just a commodity to be redistributed. So congratulations, Kanye West: You’re as much of a free thinker as some New York Times ninny.

And then there’s the ridiculous outrage about Michelle Wolf’s jokes at the White House Correspondents’ Dinner, wherein the comedian said what needed to be said and was entertaining along the way and everyone freaked out, including the Douthats in the White House press corps—the latest example of right-winger fragility. And her closing comment, “Flint still doesn’t have clean water,” is the 2018 mic-drop that West’s own “George Bush doesn’t care about black people” was back in 2005.