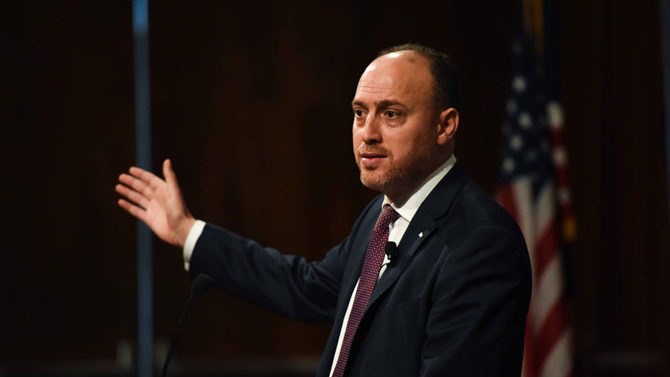 Over the past three weeks, tens of thousands of Palestinians gathered as part of the 45-day Great Return March at the Gaza-Israel border and faced the brutal, efficient Israeli Defense Forces. So far, the result has been 30 Palestinians killed and nearly 2,000 Palestinians injured, shot or otherwise harmed, many by IDF snipers.

So it was perhaps a particularly absurd moment for Husam Zomlot, Palestinian ambassador to the U.S. and adviser to Palestinian Authority President Mahmoud Abbas, to address Princeton University last week on the topic of peace. He didn’t see it that way, though.

“Some of you would take it as a joke that I talk about peace now,” Zomlot said. “But, in fact, I think it is the right subject—this is the time when we need to talk about peace.”

Zomlot is just 43 years old. He got the ambassador gig right as Donald Trump came into power. Trump soon acknowledged Jerusalem as the capital of Israel, making it apparent, no matter what the Trump regime maintains, that sincere U.S. support for a two-state solution is nonexistent.

Zomlot instructed the Princeton room not to “focus on the unreal stuff.” The Jerusalem decision is devastating—“a black day for peace,” he told NPR when it was announced—but if you move through Jerusalem today, he says, you’ll see “nothing has changed.” At the same time, he glares at the years since 1993’s Israel-Palestine peace accord with disdain: It has been ineffective, pointless, asymmetrical.

Zomlot is aware of the limits to how “the conflict” is covered in the United States. Just Google around and you’ll find limited, clueless coverage which almost always frames what happens with a familiar, frustrating “both sides” lens. When the Israeli government fired on hundreds of Palestinian protesters, it was dubbed “a clash” by most newspapers. As organizations such as Fairness and Accuracy in Reporting (FAIR) indefatigably observe, coverage often reads as though IDF bullets, both real and rubber, just appeared on the scene or leapt from IDF guns. “Poor PR? Maybe in America, but not the rest of the world,” Zomlot said. “This might be very depressing at this point and time, but there are signs that reality is changing.”

For Zomlot, any hope for America lies in the younger generation: “These kids are on fire. They know more than their parents, thanks to social media, and they are pro-peace, pro-justice.”

Zomlot then recalled an incident where young Palestinians surrounded the vehicle of some lost Israeli soldiers. The scene got tense, then terrifying—and quickly. The Palestinian police arrived, approached and fired into the air to scatter the young Palestinians and protect the Israeli soldiers. The soldiers were given directions back, and that was that. It’s a “feel good” story that is messy, imperfect and therefore useful. “Can you imagine the courage,” Zomlot asked, “to fire a bullet into the air to protect those soldiers?”

As we wade through a tedious conversation here in the U.S. about what constitutes “peaceful” protest while the state has a monopoly on violence and right-wing maniacs and Democratic centrists alike accept it, it is easy to dismiss peace. It is, in its current context here, employed as a conversation ender, mostly. Zomlot’s anecdote is a conversation starter. A “commitment to avoid the gush of blood,” Zomlot said, is not easy, but if done right is “more powerful—and it provides results.”

Towards the end of the talk, Zomlot extracted the mirth from his voice and moved away from peace towards “justice,” and what that might look like. It must begin with acknowledging what happened to the refugees, which includes people like him (he was born in the Shabura refugee camp in Gaza). “People had to leave their home at gunpoint,” he said. “Denying what happened to them won’t lead to solution.”

He wondered aloud whether he would want to return to where his family was removed, where his “father lost his home and property,” where it now looks nothing like he or his family would remember. He isn’t sure what he would do if he had the choice—because he does not. He should be able to “choose freely,” and right now he isn’t allowed to choose at all. Currently, charged-up, fully-armed IDF soldiers look across a fence and view Palestinians like Zomlot as “a demographic threat” to Israel.

Zomlot eventually arrived at a heartening, speculative-fiction-like solution—one that he stressed was his belief, not the official stance of Palestine or Abbas. What he envisions eventually is “a two-state solution that is virtual,” he said. In name only, the virtual two-state would exist to satisfy the concerns of Palestinians and Israelis, but would not need to be enforced or even considered.

“And it would be one without borders,” Zomlot added.