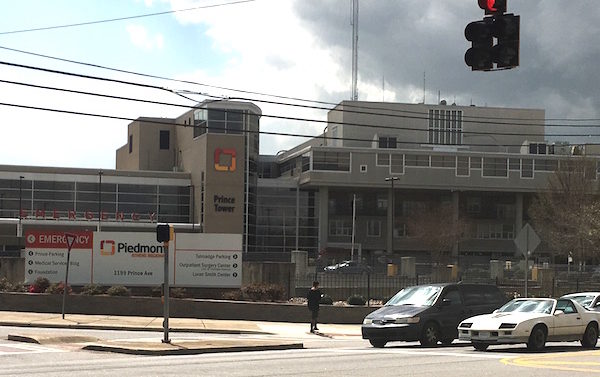 Piedmont Athens Regional is planning a $171 million expansion that will add a seven-story tower and nearly a quarter of a million square feet to the Prince Avenue hospital, according to documents filed with the state Department of Community Health.

Piedmont notified DCH last week that it intends to apply for a certificate of need to build an addition to the hospital and renovate other space.

The project would mostly affect the front of the medical complex facing Prince Avenue, where the emergency room entrance is located. It would involve tearing down part of the Prince 1 tower (the oldest part of the hospital) and building a new seven-story tower in its place. A fourth story would be added to the Prince 2 tower, and it would be renovated as well.

“In addition to the main objectives of improving delivery of patient care and operational efficiency,” the plans “have been designed to improve both vehicular and pedestrian circulation around campus and simplify patient arrival, wayfinding and access,” according to Piedmont’s letter.

The hospital’s capacity would remain at 359 beds. Forty-seven beds in outdated, undersized rooms would be demolished to make way for the new Prince 1 tower, which would include 32 acute and 32 intensive care beds, and another 25 converted from acute care to observation. The current 24-bed intensive care unit would be converted to administrative offices. Thirty-two beds would be added to the fourth floor of Prince 2.

The project would add a total of 228,691 square feet to the hospital. If approved, it would take more than three years to complete, with an expected completion date of August 2022.

When Atlanta-based Piedmont Healthcare bought Athens Regional Medical Center in 2016, it promised to invest $375 million in capital improvements over the following seven years.

Piedmont Athens Regional has not responded to Flagpole‘s request for comment.

Should I Stay With My Great Guy Even Though There’s No Spark?