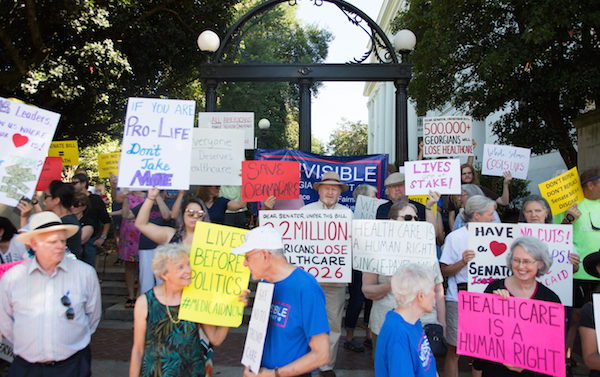 Chalis Montgomery—a piano teacher and former minister from Bethlehem, about a 30 miles west of Athens—told the crowd that she decided to run for Congress when Hice voted for the American Health Care Act, which would repeal Democrats’ Affordable Care Act and replace it with a law that would result in 23 million fewer insured people within the next decade, according to the Congressional Budget Office. 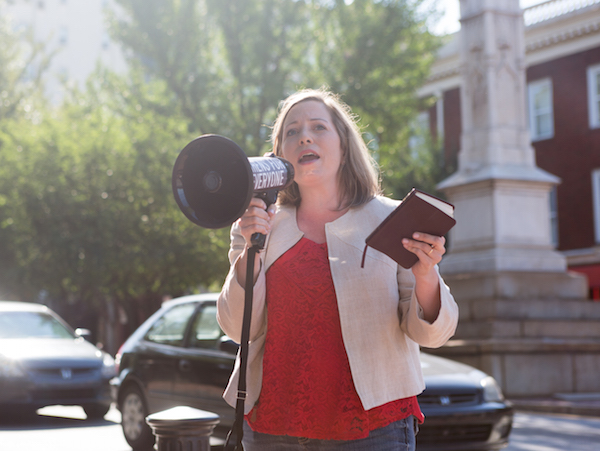 Montgomery called the Republican plan “wealthcare” because it funds tax cuts for the wealthy by cutting Medicaid by hundreds of billions of dollars.

She said she has a personal reason for opposing Medicaid cuts: Her daughter was diagnosed with rheumatoid arthritis at age 2, and has multiple prescriptions and sees a specialist eight times a year.

The House passed its health care bill on the same day her husband lost his job, Montgomery said, and their daughter, now 7, opened her piggybank and offered to pay for her care herself.

Like Montgomery, Richard Winfield, a UGA philosophy professor, said he supports a single-payer system. In a brief speech that was less fiery but longer on policy, he said he supports a single-payer system with no deductibles, copays or charge for medication. Such a system, he argued, would be more efficient, cut overhead and enable a stronger bargaining position with pharmaceutical companies. 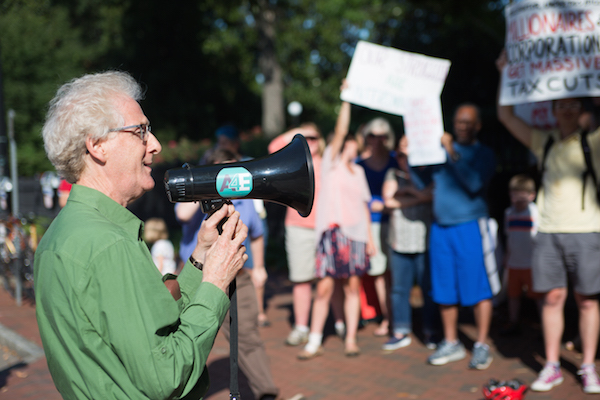 Winfield also proposed a “social bill of rights,” including a living wage and access to affordable legal counsel.

Senate Majority Leader Mitch McConnell postponed a vote on the Senate’s version of health care reform, originally scheduled for today, until after the July 4 break because several GOP senators—enough to join with Democrats to vote it down—oppose it.

In Georgia, Sen. David Perdue is likely to vote for the legislation no matter what, but Sen. Johnny Isakson may be on the fence about it, said Tim Denson, former president of the progressive group Athens for Everyone.

A4E and other groups organized rallies in Athens, Gainesville, Macon and at Isakson’s Atlanta office on Monday.