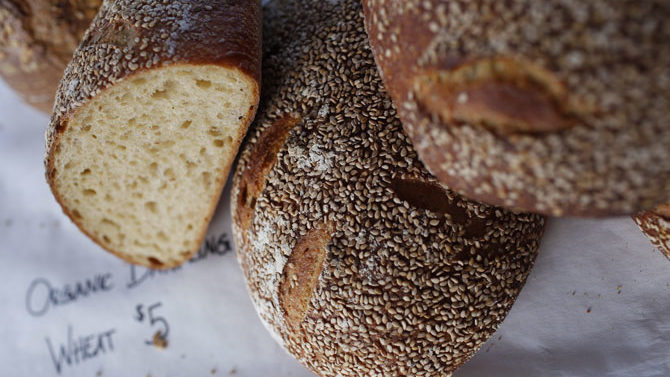 A new bread loaf is rising in Athens. Over the last year, local bakers have been experimenting with heirloom wheat and ancient grains, creating new favorites from forgotten grains of the past.

The Comerian’s new 100 percent kamut loaf is already a hit, says co-owner Uwe Happek. Kamut is a wheat relative, although the longer, golden yellow grain is twice as big as the wheat. “The nice thing about kamut is it tastes good,” Happek says. “If you make a bread from something that is ancient but nobody buys it, there is no point, right?”

Following the path of ancient-grain superstar quinoa, the popularity of kamut, einkorn and spelt is gaining momentum. Independent Baking Co.’s Thom Leonard uses three colors of quinoa and spelt in his multigrain bread. “I think it’s important to have more diversity in our diet, and bread’s an easy way to do it,” says Leonard.

“You know in the song ‘America the Beautiful,’ we talk about amber waves of grain? That was not written about modern wheat,” says Leonard. Rather than sway in the wind, the shorter modern wheat stalks only nod.

Heirloom varieties are typically passed down farmer-to-farmer through generations, and unlike modern hybridized grains, heirloom wheat varieties haven’t been manipulated. “They are the way they’ve been since day one,” says Nathan Brett, co-owner and manager at DaySpring Farms in Danielsville, where he grows the Turkey Red.

Leonard first approached DaySpring Farms about growing Turkey Red, says Brett, so they planted a test plot in fall 2015. Based on the success of that crop, they produced around eight acres of the heirloom wheat this year. DaySpring distributes Turkey Red wheat berries to Independent and The Comerian and produces a milled flour for direct sale to customers.

Brett has received positive feedback about the heirloom wheat. Some customers insist that the unmanipulated grain is easier to digest. Others just love the flavor. That’s the characteristic Leonard favors, and Brett, too. “The Turkey Red that we harvested this year has this extra malty, caramel richness to it that I have not really noticed in what we grew last year or even the grain I’ve milled for other people,” Brett says.

Heirloom varieties require less chemical fertilizer and pesticides, and their larger root systems benefit the soil. But they have some disadvantages—namely, lower yields and high disease susceptibility.

Still, the challenges are worth it, says Brett, if customers see the value in heirloom or ancient grains. “As a culture, we’ve made a big jump over the last couple of years to being more concerned with where our food comes from,” Brett says. “We see the value of eating whole foods.”

Happek says that whether we’ve eaten a loaf made from heirloom or ancient grains before, we know what good bread tastes like. Good bread, any baker will tell you, takes time. Almost every bread The Comerian produces must rise overnight, and some even require a 14-hour bake.

Rediscovering traditional bread grains and baking techniques, says Happek, reminds us how good bread used to be and can be now. As local bakers continue to experiment with new grains—spelt is the next on the list for The Comerian—Happek hopes the community continues to embrace new products.