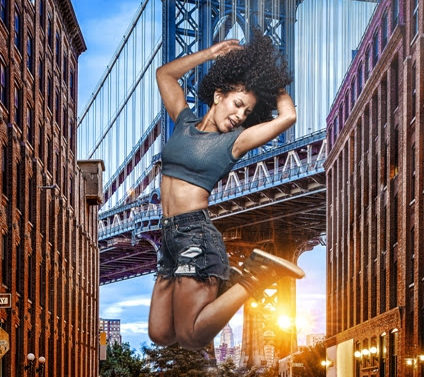 Let’s face it, most of us will not get to see Hamilton anytime soon. Even when it starts touring a year from now or more, season subscriptions to the various venues are likely to sell out before individual tickets can even go on the market. Creator and star Lin-Manuel Miranda has changed the world of musical theater, but remember that his non-stop revolution began with In The Heights, the 2008 Tony Award-winning Broadway musical with a Latin pop, hip hop and salsa soundtrack. Luckily, you now have a chance to see it at the Aurora Theatre in Lawrenceville.

Sure, Hamilton and In the Heights are two different musicals, and part of what makes Hamilton revolutionary is Miranda’s diverse, contemporary portrayal of our founding fathers building a new nation. But In the Heights was revolutionary in its own way (while set in the present day and among everyday people) and equally concerned with diverse “dreamers of American dreams, nervously eyeing their futures from a city block on the cusp of change,” as Sara Krulwich of the New York Times described it in her 2008 review. With music and lyrics by Miranda, the book by Quiara Alegria Hudes got mixed reviews for its sentimentality. Krulwich called it a “salsa-flavored soap opera,” but overall was charmed by “this scrappy little musical about chasing your dreams… if there is an equivalent of schmaltz in Spanish, this musical is happily swimming in it.”

The story follows the residents of the Washington Heights community in Manhattan as they seek romance and the American Dream. For starters, there’s the wise and optimistic bodega owner Usnavi (Diego Klock-Perez), originally played by Miranda himself on Broadway; the scholastic achiever Nina (Diany Rodriguez), who is afraid of throwing away her shot after a tough freshman year at Stanford; the non-Hispanic outsider, Benny (Garrett Turner), the boy who loves her despite her parents’ disapproval; Abuela Claudia (Felicia Hernandez), the grandmother of the neighborhood; and the beautiful dreamer Vanessa (Julissa Sabino), who works in a salon, dreams of a better life, and is beloved by Usnavi.

The families of the Heights hope to overcome obstacles, find love, and (in one case) win the lottery while surrounded by the vibrant mix of music that permeates the streets of their community. Aurora has brought together a powerful team and high production values, which promise a wonderful chance to experience all that is new and exciting in American musical theater. Plus, right now we could all use a break from news and politics with all the terrifying visions of our country at its worst. Here’s a chance to feel hopeful and happy instead. As Athenian-turned-Lawrencevillian Amy Wildey (who has roots in Athens’ Town & Gown Players), wrote of Aurora’s production: “it sums up all that I believe our country (and world) stands for and gives me hope as a member of this one human race. It will make you feel like singing and dancing and laughing and crying… In other words, it will make you feel happy to be alive!”

In The Heights by Lin-Manuel Miranda and Quiara Alegría Hudes is presented by Aurora Theatre now through Sunday, Aug. 28. Tickets range from $30–65 (with discount matinees Wednesday, Aug. 10 and Aug. 17 at 10 a.m.) and are available at tickets.auroratheatre.com or 678-226-6222.

Athens Power Rankings for the Week of July 25

I Dumped My Friend, But My Husband Didn’t