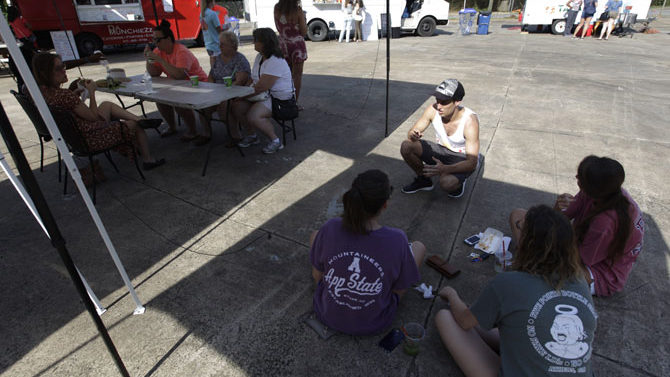 Athens has a new option for taking in dinner and a movie this summer. Sheltered from the bright late-afternoon sun, seven mobile food vendors spread out along the perimeter of the Classic Center’s 440 Foundry Pavilion on June 15, ready to serve up their creative delicacies at the Athens Food Truck Market.

This June event marked the first in a series of movie nights the group plans to host. Four of Athens’ food trucks—Taza, Da Munchiezz, Kona Ice and Holy Crepe—came together with the Rolling Runway to create the market.

“The food truck industry needs more outlets for revenue,” says Grayson Shurett, co-owner of Taza. Despite the ordinance the city passed in November allowing food trucks to park at local parks and take up public parking spaces on Hancock Avenue near City Hall on Thursdays, they have limited options to serve the public on a regular basis. The market provides that opportunity.

At 6 p.m. this market has begun to draw a crowd. Families and college students mingle with professionals beginning to make their way to the event after work. In between grabbing a bite, some visit the Rolling Runway—a mobile clothing boutique in an old Airstream trailer—while others take a seat at one of about 20 tables to listen to an acoustic guitar set. Kids hover around a face painter, waiting to be transformed into a butterfly or superhero. Later, all will settle in to watch The Sandlot on a projector screen.

Anne Carter and her family are first-time visitors to the market. They learned about it in Flagpole and decided to check it out. Having spent some time in Portland, OR, where food trucks are heavily integrated into the food culture, Carter is excited to see food trucks in Athens coming into their own. The market, she says, “is a good way to bring the community together.”

That’s exactly what Saphir Grici of Holy Crepe had in mind when he and the other food trucks in town dreamed up the food truck market. The idea of bringing together Athens’ food trucks in a market, says Grici, was simmering in his head for some time, but he wasn’t sure how the public would respond.

The answer floored him and fellow food truckers. About 1,500 people came to the market’s first event at the Jittery Joe’s Roasting Co. on Barber Street, where the event is held every other Wednesday unless rain threatens and it’s moved to the covered Classic Center pavilion. But Grici measured the true success of the event when he finally emerged from the truck. What he saw gave him goosebumps. “The goal of [the market] was really to bring people together, and when I left the truck and I saw people after they ate still hanging out with their blanket and families, young, old people, all there… I said, ‘OK, this is something, this is something Athens wants.’”

For Grici, the market’s success is another step toward establishing a robust food truck industry in Athens. “We love this city and this community,” says Grici, which is why he was willing to tough out the state’s lengthy permitting process and raise over $10,000 to create a dump station for the truck’s waste.

Still, compared to setting up a full restaurant, says Shurett, creating a food truck business is more accessible for entrepreneurs. Shurett and his business partner, Tony Abdelmalek, created Taza for a class project. When fellow students wanted more of their Mediterranean-meets-Southern cuisine, they decided to go full time with it.

Shurett sees a silver lining in the barriers Georgia and the county present to food trucks. If you’re willing to wade through the red tape, he says, you can access an untapped market. Compared to Atlanta, where hundreds of food trucks vie for business, the few that stuck it out in Athens benefit from pent-up community demand. “To me, it’s like a gold mine,” Shurett says.

“I hope it takes off,” says Carter as she settles her son, Sam, at a table with a cheese pizza. A hint of Kona Ice is smeared at the corner of Sam’s mouth. The rest of his face is covered in the telltale black and yellow of a Batman mask. When his mom asks him what he thinks of the market, he answers simply: “This is good.”