This Dragon Lady Beer Is No Daenerys

The label on Southern Tier Live Pale Ale reminds me of TV graphics in the early ’90s: bright and colorful and  confusing. It’s disjointed and overly busy—a mosaic of tickets to live events, in case the title of the beer was too subtle. The beer is slightly darker than your standard fizzwater but lighter than many other American pale ales. Live has a malty aroma tinged with fruit—think of mango combined in a fruit salad with pineapple and oranges. However, the fruity scent doesn’t overpower the malts and hops.

This is not a super fruity wheat beer, though. The tropical flavor plays second fiddle to the malt and hop symphony swimming in the glass. The unexpected fruit flavor sets it apart from other American pale ales. Give it to your friends who enjoy Blue Moon and Shocktop; they’ll enjoy the flavor of this beer, and they will have a chance to try a different style of beer besides wheat. The flavor is complex and satisfying. At 5.5% ABV, this beer is great for summer days.

Blue Point Summer Ale comes packaged in a bright blue can with sandy yellow lettering, like some kind of strangely shaped alphabet beach. If someone were to set this beer in a glass next to a High Life, PBR or Bud Light in a glass, I wouldn’t be able to tell the difference. The similarities to American macrobrews continue beyond the straw yellow coloration. At 4.4% ABV, this session ale is light and refreshing on a hot day. Unfortunately, this beer is so similar to a typical macrobrew that there’s no reason to buy it. A 12-pack of Genesee Cream Ale costs about the same as a sixer of Blue Point Summer Ale and tastes virtually the same. Avoiding this beer is an easy decision. 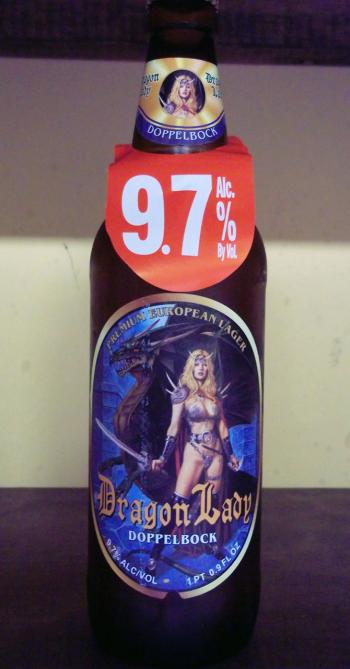 Where to begin with Dragon Lady, a monstrosity of a beer? Adorning the label is a 1980s  barbarian warrior queen, complete with the obligatory armor bikini, broadsword, knee-high ass-kicking boots and horned crown. She looks like the offspring of Conan the Barbarian and a brewery. This Dragon Lady wants to crush your taste buds, and see them driven before her, and hear the lamentations of your sobriety. Behind our heroine stands a sad dragon with tiny T-Rex arms and a blank expression. Above the label is a red warning flag explaining that this beer contains 9.7% ABV.

Dragon Lady describes itself as a “Premium European Lager,” as well as a doppelbock (a dark lager). Alas, poor Dragon Lady, you are neither. Dragon Lady assaults its unsuspecting drinker with the scent of a skunky malt liquor spiked with a shot of cheap vodka. The color of the beer is a distinct copper and in no way could be mistaken for the dopplebock that the label claims is within. The primary flavor of this beer is neither hop character nor maltiness, but the flavor of rubbing alcohol wrapped in a thin veneer of beer. Should you decide to tackle the Dragon Lady, drink it straight from the bottle to minimize the attack on your nose. For less than $3 a pint, this beer is what you should drink shortly before taking on Thulsa Doom.

The India pale ale is a style that divides beer drinkers. Some love the aromatic hop assault of a West Coast IPA, while others prefer drinks that don’t leave their palates like the Miami Marlins: crushed and broken. Building a bridge between the two extremes is 21st Amendment Brew Free or Die! IPA.  Despite a strong hop aroma, the beer itself tastes surprisingly malty and is well balanced. In fact, this beer is so balanced that it would probably self-identify as an undecided voter on Election Day. It’s also extremely tasty. If you’re unsure about IPAs, give this one a try.

Much like Napoleon Dynamite’s favorite animal, Dogfish Head Sixty-One Minute IPA is a hybrid: an IPA provides part of its genetic code, and an unfinished Syrah wine makes up the other. Unlike the majestic liger, though, it has no magical powers beyond being delicious. The addition of the grapes causes the beer to look like Cheerwine, which is suddenly something I wish would happen more often with beer. The aroma is more tart than bitter, thanks to the grape must. The flavor is complex. The grapes, hops and malts are all fighting for dominance, and picking apart the depth of taste is a fun experience. This beer is unique, and you should definitely try it if you think you can throw a football right over those mountains.