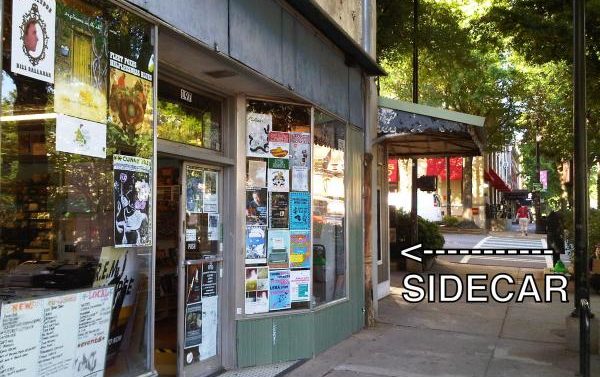 The storefront on the northwest corner of Clayton Street and College Avenue downtown was once home to Wuxtry Records, until the record store moved into the larger space next door in 1989. Most recently, the former location served as an eat-in area for Ike and Jane‘s nearby stand. Now, Wuxtry is again reclaiming the teensy space (the store housed its used-CD selection there for a brief stint), reopening it as a spot to buy bargain-priced used vinyl.

The grand opening of Wuxtry’s Sidecar—yes, it’s a great name—is this Saturday, Aug. 10. From noon to 6 p.m., you can celebrate the dogged persistence of physical music while perusing the Sidecar’s discounted wares and listening to live tunes courtesy of psych-folk explorers Old Smokey.

“We’re kind of overflowing with records,” says Wuxtry owner Dan Wall, who describes the Sidecar as a “vinyl outlet”: a place to find used records at discount prices—up to half-off sticker price—and also a selection of used turntables and speakers. He promises “a lot of good stuff” and “a little bit of everything,” explaining that his main store was simply running out of room to display its growing vinyl stock.

Wall also says the decision to redefine the smaller room stemmed partly from financial necessity. “Because of downtown rents,” he says, “you’ve gotta try to make money from [the space].”

Hours aren’t quite set yet, but the Sidecar will definitely be open on weekends. Wall also promises more in-store performances this fall. And yes, the Sidecar will sit directly underneath comix haven Bizarro Wuxtry, which means that entire corner is now basically a Wuxtry compound. Which basically makes it a cult. Which means Wall is Athens music’s Jim Jones. Don’t drink the Kool-Aid!