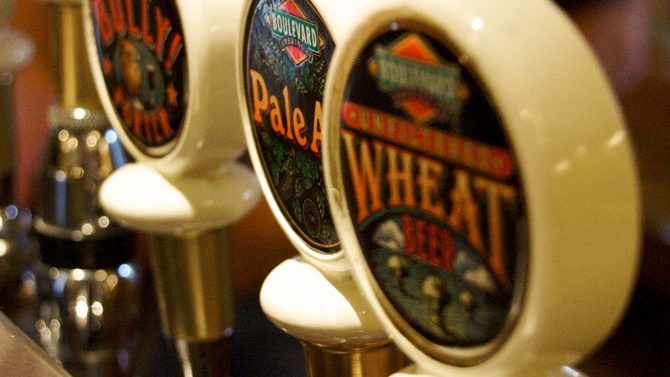 This weekend, the Bulldogs travel to Columbia, MO to play yet another set of Tigers. The trip to Faurot Field in 2012 was particularly memorable, as the Jarvis Jones Show demonstrated the value of “Old Man Football” directly to then-Missouri quarterback James Franklin’s face, sacking him twice and forcing two fumbles en route to a Georgia victory. This year’s matchup should be a good one, and seeing as how Missouri is both the ancestral home of the King of Macrobrews and a thriving craft beer scene, it’s a good time to talk about Mizzou brews, some of which can be found in Athens.

Flat Branch Pub & Brewing is Columbia’s first brewery since 1841 and has an absolutely massive list of house brews, including two different bitters, three different pale ales, a multitude of IPAs, two different chili beers, fruit beer and a number of special seasonal releases. It also has an extensive selection of scotch and bourbon, for those of you who prefer your alcohol distilled. The brewery is located in an old, renovated warehouse in downtown and looks to be a great place to snag some well-made brews before watching some gridiron action.

Founded in 2009, Broadway Brewery currently lists 11 different drinking options, including the Backyard B.B.Q.P.A., Cherry Saison and Double Rye IPA, among others. Broadway Brewery also offers food prepared from local farms, much like the old Farm 255 here in Athens. The brewery owners operate two of the farms themselves. Broadway Brewery looks to be a good option for maintaining your prized locavore status while on a football voyage.

Of course, any article about Missouri beer would be incomplete without mentioning the two largest breweries in the Show Me State: Anheuser-Busch of St. Louis, champions of Bud Light, and Boulevard Brewing Company, operating out of Kansas City. Together, the two breweries represent the dichotomy between Big Beer and craft.

The massive global beverage conglomerate Anheuser-Busch InBev controls a staggeringly large amount of the world beer market: 25 percent of all beer sold in the world is produced by Anheuser-Busch InBev in some capacity. In no particular order, here are are a few of the brands that are owned by the people who own America’s largest brewery: Stella Artois, Budweiser, Corona, Modelo, Victoria, Bass, Beck’s, Labatt, Hoegaarden, Leffe, Lowenbrau, Franziskaner, Goose Island, St. Pauli Girl, Spaten, Bohemia, Boddington’s and a frightening Russian brand known only as BagBier.

The sheer amount of beer controlled by this company is remarkable, albeit not as remarkable as the advertising that claims that Bud Light is #MadeInAmerica, while ignoring the fact that it is #OwnedByBelgians—Anheuser-Busch’s corporate headquarters aren’t in Missouri. That honor belongs to the city of Leuven, Belgium.

Founded in the late 1980s, Boulevard Brewing Company is Missouri’s second largest brewery, capable of churning out 600,000 barrels of beer annually. Their Smokestack Series is quite good; my personal favorite is Tank 7, an 8.5% ABV saison named after an unruly fermenting tank. The Doublewide IPA is delicious—aggressively hopped but not overpowering. The Saison-Brett is light in color but heavy in flavor, brewed with Brettanomyces yeast to dial up some wild yeast funk—think tart, like a cider.

Not every Boulevard beer is an esoteric, single-bottle serving. They also offer several year-round six-pack brews. 80-Acre Hoppy Wheat Beer is exactly what it sounds like: an extra dose of hops adds extra flavor to their delightful wheat. KC Pils is a crisp and refreshing pilsner, and the Bully! Porter is a nice darker option for malt fiends.

Boulevard has been widely successful in its 25 years of operation, earning multiple awards and medals from beer festivals. The success of the company brought interest from Duvel Moortgat, a Flemish brewery known for producing the strong golden ale Duvel. In 2013 Duvel Moortgat purchased Boulevard Brewing Company.

While no longer financially independent, the brewers at Boulevard still retain control over what they create. John McDonald, Boulevard’s founder, wrote last October: “[Duvel] bring to us an unparalleled depth of experience, strong resources and an unwavering devotion to quality.” The purchase of an American craft brewery by a world-renowned Belgian brewery represents how far respect for American brewing has come since the craft movement began in the 1970s.