Here Are the Nine Best Beers to Drink in Wintertime 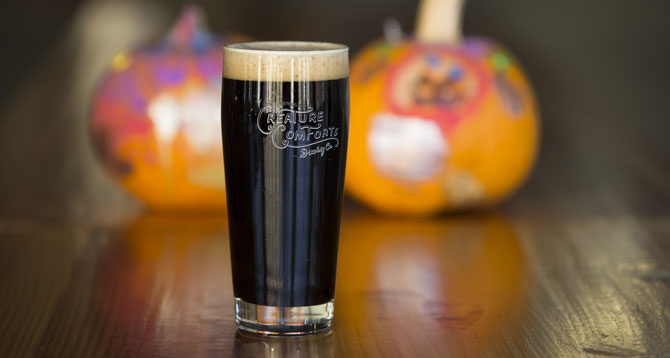 Winter is an odd time in Georgia. The weather is usually cold and dreary, but also sunny, 70 degree days aren’t terribly surprising to anyone. Seasonal winter beers are similar: Many breweries release stouts and porters for the colder months. These hefty, malt-driven brews lend themselves to higher alcohol content, helping to warm huddled drinkers on cold nights. If you don’t care for these dark, delicious beers, don’t fret. There are plenty of lighter options for winter.

One of the lighter choices is Bell’s Winter White. This witbier pours a hazy straw-yellow, with mild clove and banana aromas created by the Belgian yeast strain. The finish is smooth and dry, and the alcohol content is a mild 5% ABV—perfectly serviceable, albeit boring.

A better option in a similar style is Victory Winter Cheers. Brewed with German hefeweizen yeast, barley malt, wheat and oats, Winter Cheers offers a depth of aroma and character that the Winter White lacks. The beer has the same clove-and-banana yeast qualities, but the more complex malts provide a fuller flavor, and the whole-flower Tettnang and Citra hops round out this beverage beautifully. It’s also stronger than your average hefeweizen, boasting  6.7% ABV.

Of course, not everyone enjoys hefeweizens and witbiers. A winter beer on the lighter side of the color spectrum brewed with crisp lager yeast is Dogfish Head’s Piercing Pils. This one is an oddity. A pilsner brewed with traditional Saaz hops and citrusy American Amarillo hops, this seasonal beer receives a heaping dose of pear juice during the brewing process. It shouldn’t work (and probably wouldn’t if I tried brewing it at home), but it does. At 6% ABV, this one is delightful.

If pilsners brewed with pears and high-octane hefeweizens aren’t your speed, consider a winter warmer. These malty, British-style ales occupy a halfway point between brown ales and barleywines. They often have characteristics of toffee—caramel with a low hoppiness. Some varieties have distinct notes of earthy spices, like Anderson Valley’s Winter Solstice. At 6.9% ABV, this brew is one of the best released for the colder months. If you prefer a more traditional take on your winter warmer, pick up Sam Smith’s Winter Welcome. This one trends more toward the mild bitter side of winter warmers than barleywine. It’s malty, but not overly sweet, with finely balanced hop character. The most impressive thing about this beer is its balance: No flavor is too loud. Plus, it has Shakespeare on a purple label, which is nice.

Then again, what if you want the heaviest, strongest beer available? Something with the power to help you hibernate until Opening Day sounds about right in January. Look no further than the stout and its cousin, the porter. The darkest ale available, a good stout does the best job in helping beer drinkers survive winter.

There are plenty of great options available year-round, but I’m only going to highlight two: Red Brick’s Divine Bovine and Kasteel Winter. Divine Bovine is at heart a milk stout, a variety of beer that uses unfermentable lactose to add sweetness to the final product. Divine Bovine adds a load of spices to create something new: This beer is a chai tea milk stout, and it works. It pours inky black, with a brown head—typical for a stout, but it smells great. The spices dominate the aroma but don’t entirely mask the roasted malt. The body of the beer is creamy but not overly so.

Divine Bovine is great, but not the greatest stout available in winter. That distinction belongs to Kasteel Winter. A dark, strong Belgian ale, this one packs an enormous amount of flavor—licorice, bread, black pepper, clove and coffee. It’s got a lot going on. You can taste the warmth of alcohol, but not as much as the 11% ABV would suggest. If you are a fan of stouts, don’t let this one pass you by. It’s worth the expense, plus the bottle is a funny shape.

And Two More: Winter means stouts, dammit. Save the witbiers for springtime. Jacob’s employment at Creature Comforts prevented him from mentioning that brewery’s Koko Buni, so I will, because it’s worth mentioning. The milk porter—only available seasonally and on draft—is brewed with coffee, chocolate and coconut, giving it a nice balance between sweet and bitter. Of course, there’s also Terrapin Moo Hoo, an unintimidating stout that’s basically a chocolate milkshake that will get you drunk, and who wouldn’t want one of those? [Blake Aued]