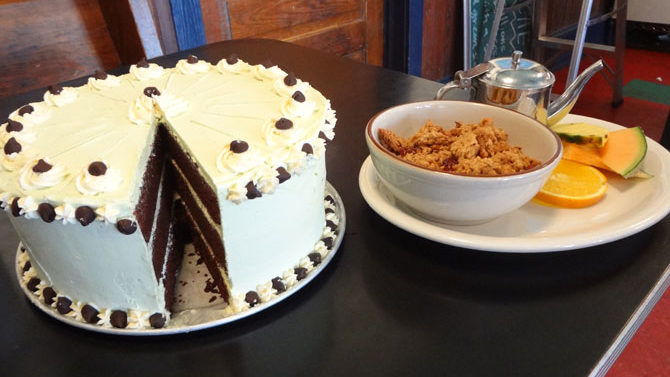 When Echo opened on Washington Street in September, vegans throughout Athens rejoiced. After ages of being high-maintenance diners begging waitresses to hold the cheese and sub the sauce, Athens vegans could go somewhere and ask no questions.

But now that our Mecca of tempeh bacon and jackfruit tuna has closed, where are we to go? The Grit is the obvious answer for tasty vegan food in most of these categories, but what about when our friends aren’t in the mood for Prince Avenue hipsters and tofu scramble? Fortunately, Athens now has tons of other options, too. Flagpole surveyed some local vegans on what they eat with the omnivores they love.

Burgers: Everybody loves a good burger—just not always the beef kind. The Grill, Clocked, Globe and Grindhouse all have delish bean patties. The Grill, Clocked and Grindhouse also boast vegan tofu dogs. Clocked even offers Vegenaise, Tofutti cheese, seitan and vegan basil-jalapeño dressing. And when you just have to eat at a burger-n-fries joint, it can be a nice break from the nine pounds of kale in your fridge.

“I particularly enjoy an excuse to eat french fries,” says Jordan Alexander, who became a vegan a year ago. “I really enjoy treating myself to unhealthy food or saving money by snacking on appetizers.”

Burritos: As a college-poor vegan who rarely has more than $5 in her wallet, Taco Stand is my jam. For around $4, you can get a deluxe tofu burrito with guacamole instead of cheese and sour cream. Barberitos, Moe’s, Willy’s and Chipotle also offer easily vegan-ized burrito options, not to mention the possibilities for veggie chili, salads and burrito bowls.

Pizza: Let’s face it—Daiya is not cheese. “I love Mellow Mushroom,” says Caroline Vason. “I don’t love vegan cheese. Unless you can’t remember the taste of cheese, there just isn’t a comparison.”

However, Daiya’s cheese-like product has its place, and sometimes it’s on your pizza. Mellow Mushroom and Your Pie  will both slap it on for you, though the ‘Shroom adds an unfortunate upcharge. In addition, Ted’s Most Best will make you a pizza with no cheese. (Is that still a pizza?)

But if mozzarella-style tapioca goop isn’t for you, have no fear. Mellow Mushroom and Transmetropolitan both have highly praised build-your-own salad options, and Transmet can vegan-ize a calzone. In fact, says Transmet cook Dionnet Bhatti, there is an underground specialty vegan pizza that is not on the menu called “the babsie.” The secret pizza has a red sauce base, vegan kalamata pesto, blackened tofu, yellow onions, mushrooms and green olives without cheese. Eating it will up your cool quotient and magnify your vegan powers.

Asian: Who doesn’t love curry? Lots of people, I guess, but Athens has some good ones if you’re into that. Look out for the fish sauces at Thai Spoon and Siri Thai, several vegans warned me, but Cozy Yum Yum’s curries are all safe. Get something with veggies or tofu in it and you are all set. “I usually just look for anything stir-fry,” Samantha McDonald says.

Yes, there are only two Vietnamese places in town—Yummy Pho and Just Pho and More—but they are both super vegan-friendly. Get the vegan pho at either one, and you’ll be happy and full for days. Even if you’re not in the mood for pho, there are tons of rice-y, noodle-y, broth-y options. There are even a few milk-less bubble teas—just get the slushy option.

Taste of India is the only Indian place in town, but it has an entire vegetarian menu with all of the vegan options indicated, and the lunch buffet is clearly marked and quite vegan-friendly. “I definitely appreciate everything that I can find labeled ‘vegan’ at restaurants,” McDonald says.

Technically, the Middle East is in Asia, and Lebanese restaurant The Sultan also offers vegan-friendly options.

Fancy Food: A good general rule for nicer restaurants is to call ahead; most are willing to accommodate reasonable dietary requests, and many will make you something off-menu, vegan and delicious. The Last Resort’s salads are allegedly terrific, and its black beans are the go-to option for a few vegans. The National’s “power lunch” is easily vegan-ized, and Étienne Brasserie offers what vegan Kelly Martin declares “the best vegetable plate ever.

“Definitely give them a five out of five,” she says. “They are totally willing to create something special for those who want to avoid meat and/or dairy.”

Other Options: If you like the sound of super-spicy, mushy-but-somehow-still-good food in a no-frills setting, Kelly’s Authentic Jamaican Food might be for you. “Kelly’s Jerk near Five Points is definitely a meat-centric eatery, but they have a great veggie plate,” Sam Helmey says. “Kelly’s rice and peas, collard greens, spicy squash and cabbage make a superb vegan soul food meal at a good value.” Or you can just go for a giant sweet tea and fried plantains.

So when your family/girlfriend/boyfriend/subconscious just isn’t in the mood to eat soy anything, remember that there are vegan fairies looking out for you in kitchens all over Athens. It’s always a good idea to warn the server or cook just in case, but you need not limit yourself to side salads and the emergency Clif bars you keep in your bag.