The Dangerous Rhetoric of Trump and Time Magazine on Opioids 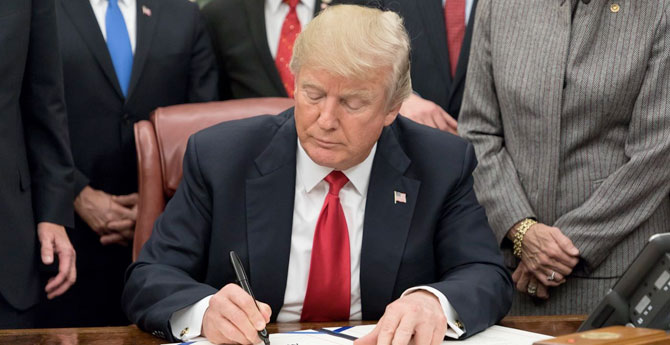 At a White House summit on the opioid epidemic, Donald Trump suggested that the death penalty may be appropriate for drug dealers.

“We have pushers and drug dealers, they are killing hundreds and hundreds of people,” he said “If you shoot one person, they give you life, they give you the death penalty. These people can kill 2,000, 3,000 people, and nothing happens to them.” He went on to say that in countries that have the “the ultimate penalty” for drugs, “they have much less of a drug problem than we do.”

This has been the problem with the rhetoric of the “opioid epidemic” that began when increasing numbers of white people were dying from drugs. “Drug dealers” are an easy rhetorical target, and wretched-looking white kids are the perfect victims. A couple days before the conference, Axios reported that Trump often used this rhetoric among family and staff, and you can pretty much imagine how that sounds: “Put drug dealers up against the wall and shoot them.”

Like The Wall, it’s stupid and simple and perfect for Trump, who has been praising Rodrigo Duterte, the president of the Philippines whose drug war has killed more than 12,000 people, according to Human Rights Watch. And, of course, Trump’s attorney general, Jeff Sessions, probably hates weed more than anything—except Trump, who has been calling Sessions “Mr. Magoo.”

But it is no surprise that Trump associates floated the idea of killing drug dealers at this moment. Days before the Axios story, on Feb. 22, Time published “The Opioid Diaries,” a prestige photo essay showing a bunch of white people in really bad shape. Its web design and presentation screamed out: IMPORTANT!

What really is important about it? It is so reeaal. But is it important to see, “Two women, one of whom goes by Pangea, right, openly using on the streets of San Francisco on Jan. 26”? We always love to see the Beautiful People lost, the lost people ugly, the ruined purity of girls who go by Pangea.

Joan Didion probably didn’t start it, but she did it well in Slouching Towards Bethlehem, her prose equivalent of “The Opioid Diaries” about the acid heads in San Francisco in 1967, when the country was starting to freak out about the dangers of LSD. The New Yorker’s Louis Menand echoes popular opinion when he claims that Didion “used a vernacular voice that mimicked the laid-back aimlessness of Haight speech” but, despite Didion’s telegraphically beautiful style, this piece comes across primarily as square and gawkerish. LSD had already been outlawed in California by the time she went to Haight-Ashbury, but federal laws were passed a year later—partly as a result of all of the IMPORTANT stories about the lost acid kids (Didion’s depicts a 5-year-old on acid).

So when, in Time’s “Opioid Diaries,” we read about “Gust Andrew Teague II, 42, a deputy sheriff in Montgomery County, Ohio, handcuffing two unidentified men suspected of drug possession in Dayton on June 29, 2017,” we know where all of this realness lands us—in jail.

But addiction is a disease, right? That’s the thing we are all saying now. When we have an outbreak of the stomach flu, do we need graphic pictures of diarrhea to show it? Do we have IMPORTANT black-and-white photos of people trotting, with clenched cheeks, toward the toilet? The washed-out woman, underwear around her ankles, looking down at her TP, post-wipe? We are all gross when we are sick, so why do we need all the dehumanizing pics?.

James Nachtwey’s photos, certainly unintentionally, turn the users into grotesque victims and their dealers into mass murderers.  So all of this becomes Trump’s justification for floating the idea of killing all of the drug dealers. But we know that pharmaceutical companies, not black or Latinx drug gangs, got these middle-class white kids we’re all worried about hooked. More than 60 U.S. cities, including Athens, are suing pharmaceutical companies over opioid pushing, and a number of states have banded together to subpoena more information from them.

Sessions’ DOJ announced last week that it would file a “statement of interest” in these suits. “Opioid abuse is driving the deadliest drug crisis in American history. It has cost this nation hundreds of thousands of precious lives. It has strained our public health and law enforcement resources and bankrupted countless families across this country,” the statement read. “President Trump and this administration have made ending this unprecedented crisis a priority, and the Department of Justice is committed to using every lawful tool at our disposal to turn the tide. We will seek to hold accountable those whose illegality has cost us billions of taxpayer dollars.”

Just to step back and spell it out: When it is a big corporation that takes “precious lives,” the recourse is a statement of interest and some lawsuits. But when it is an individual citizen—or even worse, an immigrant—the solution is death. This is the essence of our post-Citizens United world—corporations have all of the privileges of people and none of the responsibilities or consequences. So even if we don’t, say, execute the CEO of Purdue, could we dissolve the corporation?

Since so many Americans have their retirement and savings in the stock market—staking their futures on the jousting matches of the corporate aristocracy—that will never happen. We are all complicit in the corporate misdeeds, and we don’t want to look too hard at that. So they’ll be hit with some suits and some fines, but nothing much will happen to hurt the bottom line. Meanwhile, even Democrats will get behind this revived “tough on crime” approach because they don’t personally know any “drug lords,” and so calling for their execution is actually politically safer than calling for harm reduction.