Trump Uses the Legal System for His Own Ends 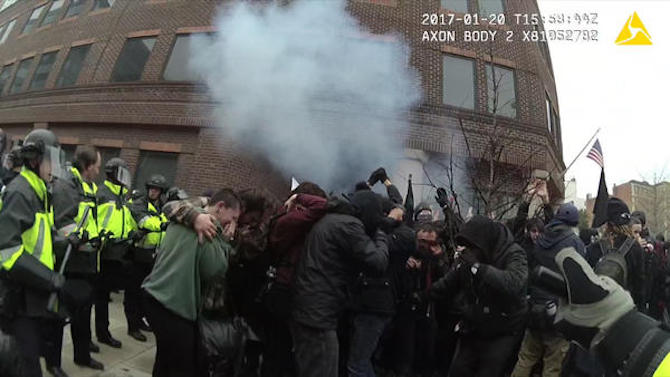 A judge sanctioned the U.S. attorney’s office in the District of Columbia, which has spent the last year and a half prosecuting people who protested the president’s inauguration. Prosecutors failed to hand over evidence to the defense, a major breach in court procedure that endangers the justice system itself.

On Jan. 20, 2017—J20—Washington, D.C.’s  Metropolitan Police Department threw more than 70 “non-lethal” grenades, sometimes hitting innocent bystanders in the head, and emptied dozens of canisters of tear gas against protesters. Then they cordoned off more than 200 people and charged them all with violating the Riot Act. Because they relied on a theory that anyone in black conspired to destroy property, all 200 people were charged with breaking the windows of a Starbucks and a Bank of America.

The government was forced to drop the charges against all but 58 of the defendants after losing the first case in January.

Elizabeth Lagesse, one of the defendants, argued in a motion that the government continued to press charges against her, not because they had any evidence that she had engaged in the destruction of property or even conspired to help anyone else do it, but because she talked to the press—including Democracy in Crisis—and filed a civil suit against the police with the American Civil Liberties Union.

“[Prosecutor Jennifer] Kerkhoff’s May 11 email also highlights the government’s ongoing fixation with Ms. Lagesse’s media presence and her pending lawsuit—protected conduct that has no relevance to the case,” the motion argues, making reference to an email from the prosecutor, which, it argues “is filled with derisive asides about Ms. Lagesse’s public statements, which go as far as accusing Ms. Lagesse of spreading ‘misinformation.’”

Like most things Trumpian, this prosecution engages with the seediest parts of the alt-right. In this case, the prosecution relied heavily on a video surreptitiously filmed by Project Veritas, the far-right video-editing outfit that brought down ACORN and regularly fails trying to “sting” media outlets like the Washington Post.

The Project Veritas video shows a group of people planning a march and mentioning an “anti-capitalist, anti-fascist” action, and provides part of the basis for the conspiracy to riot charges—which otherwise hinge on wearing black. It has been central to the government’s case against the protesters because they claim it proves that defendants planned to destroy properties and shut the city down.

But in court last week, it came out that the government did not give the defense attorneys all of the video—three minutes were cut off. During those three minutes, the Veritas operative said: “I don’t think they know anything.” There was also evidence that the Jan. 8, 2017 planning meeting included a session on how to de-escalate a violent situation.

Project Veritas is notorious for selectively editing and publishing video, but in this case, the sleazeball org looks downright honest in comparison with the U.S. government. “There were a lot of things that were captured by Veritas. We gave them what was relevant in the case,” said Ahmed Baset, an assistant U.S. Attorney working the case with Kerkhoff, to the judge—as if it is up to the prosecution to determine what is relevant.

For one defendant, Dylan Petrohilos, that meant that his charges would be dropped altogether since he was not even arrested at the protest but was picked up months later when police officers raided his home and took an antifa flag and copies of the liberal magazine The Nation as evidence of the conspiracy.

For others, the weight of a long prosecution and the potential of a long sentence was still there to bludgeon them. As one defendant, Ella Fassler, tweeted, “it’s starting to look like my co-defendants and I will… only be facing up to ~10-20 years in prison now.” The prosecution has been intended as a form of punishment.

After testifying in last week’s trial, one officer named William Chatman wore a shirt with a slogan that condoned police brutality—“Police Brutality… Or Doing What Their Parents Should Have!”—in the courthouse. It is a clear message, not only to the defendants, but potentially to the jury.

At the same time that Kerkhoff was being sanctioned in one court, the jury in one of the other trial groups was deliberating—they had not returned a verdict at press time.

This prosecution bears all the hallmarks to Trump’s sense of justice. At virtually the same time all of this was going down in the D.C. Superior Court, across town, Trump was underlining the capricious nature of justice in his regime with his pardon of conservative pundit and criminal Dinesh D’Souza. Instead of going through the Department of Justice’s Office of the Pardon Attorney, Trump randomly picks friends, political allies or celebrities. His last big pardon was concentration camp concierge and former sheriff Joe Arpaio.

In ancient Greek political thought, the mark of tyranny was the desire to help one’s friends and to harm one’s enemies. Both the pardon of D’Souza and the prosecution of the J20 protesters are motivated by this desire.

Like Trump, Kerkhoff and the MPD make it seem like the vindictive nature of the prosecution is its purpose, not some accidental feature.