Chelsea Manning Regrets Reaching Out to the Alt-Right 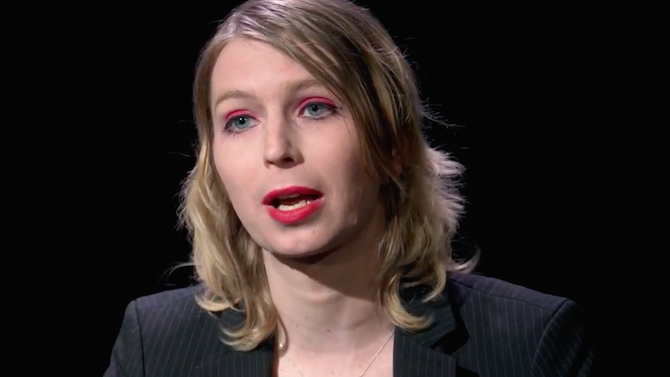 Chelsea Manning was criticized for going to a party with some of the alt-lite “we’re not quite Nazis” crowd back in January. The “Deplorable” party was sponsored by Pizzagate snake-oil salesman Mike Cernovich and attended by “slav right” provocateur Jack Posobiec, horrible Project Veritas video editor James O’Keefe and litigious “western chauvinist” Vice and Proud Boys founder Gavin McInnes.

Manning—the whistleblower who exposed some of the horrendous practices of the the American military in Iraq and Afghanistan and spent seven years in prison, where she transitioned to living as a trans woman—is running for U.S. Senate in Maryland, and so I wanted to ask her what the hell she was thinking when she attended that party with Cassandra Fairbanks.

Some of the Russiagaters think that her attendance at the party with Fairbanks, who now works for Russia Today, indicates that she is a Russian troll trying to upset our election again by unseating Sen. Ben Cardin. I didn’t even entertain that idea because I think it is so unlikely; Cardin is far from some kind of left-wing hero, and Manning has such a slim chance of winning that the idea seems patently stupid.

But there was something interesting there: What was she hoping for? Manning admitted it was a terrible decision. “I know, it was poorly considered. It was a poorly considered decision, and I regret it a lot,” she said. “And I think about that a lot. And I’m not perfect… I’m going to screw up. And that was a major screw-up. And I let a lot of people that were close to me down… It was just a bad decision.”

She explained that when she protested against Cernovich and Milo Yiannopoulos last fall, she thought Fairbanks was someone who could perhaps be reached. She was trying to understand.

“We need to learn and understand how to fight the alt-right, in particular this virulent form of the alt-right,” she said. “We started, we lost our vision, we lost our intent, we lost our objective. And I decided… to crash this party and protest, and they flipped it upside down.”

I’ve been interviewing a lot of politicians lately, and they usually want to rush away from their mistakes as quickly as possible. But Manning was interested in returning to the topic.

I asked her about Charlottesville, where many people complained that the police didn’t do enough to stop the Nazis. How can you be effectively anti-Nazi without relying on police?

But from there, she turned back to the party. “That was one of the things that made me make the mistake that I made, you know, in January,” she said. “I want to know how to take these people down, because they need to be taken off of Twitter. They need to be de-platformed… They need to be removed from that public space. And, you know, the police are not going to do that. We’re going to have to do that ourselves.”

This approach to error is interesting. It’s new for all of us to have to be fighting Nazis. I mean, if you grew up in a punk scene somewhere, you’re a little more accustomed to it. But in general, if you are a white person, you are going to say or think some racist shit. If you are a man, you will say or think some sexist shit. And if you are cisgender, you will likely say or think something stupid about trans people. The purpose of “progressive” politics is not to be perfect and shun everyone who is not—it is to figure out how to be personally better. And we can only do that when we admit our mistakes. But when it comes to policy, we are too ready to settle for good enough.

“We don’t need more or better police. We need to push back against the police state,” Manning said. “They always want more. We have the largest prison population in the world.”

But the Democratic Party, whose primary she is running in, doesn’t try to stop the police state—they just try to make it more palatable. “The approach that the party has repeatedly taken is to make it somehow more inclusive, to add a sort of administrative gloss to the process,” she said.

The J20 trials of the people who were arrested during Trump’s inauguration, which begin again Apr. 17, are the perfect example of the surveillance state Manning has been fighting against since she first leaked a trove of documents to WikiLeaks in 2010. Washington, DC’s Metropolitan Police Department has thousands of hours of footage from body cams and cell phones, and they seek to control it all as they prosecute 59 people for wearing black and moving en masse.

And again, that case, which used footage from Project Veritas, highlights the connections between law enforcement and the far right. “They video us, they take pictures of us, and they dox us,” Manning said of the alt-right. “People are getting targeted. And… they’re going to jail.”