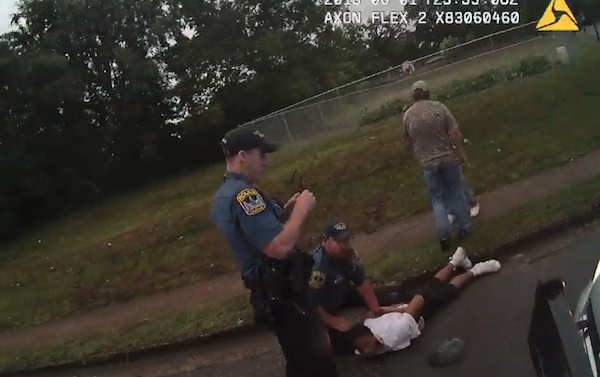 The Athens Anti-Discrimination Movement has issued a statement in support of Athens-Clarke County Police Chief Scott Freeman for firing an officer who hit suspect Timmy Patmon with his police car Friday.

No one is above the law. Athens Anti-Discrimination Movement (AADM) Board Members and President Mokah Jasmine Johnson is pleased that Athens Clarke County’s police Chief Scott Freeman decided to terminate Officer [Taylor] Saulters after initially placing him on administrative leave. After viewing the video of Friday nights incident; various AAMD members were horrified by what we saw. Saulters made a poor decision when he decided to use his patrol vehicle to stop a fleeing suspect. His job was to protect and serve; not to cause undo harm to an individual. Mr. Patmon may have broken the law, however, he did not deserve to be dehumanized and assaulted on the day in question.

Freeman fired Saulters Sunday after an internal affairs investigation found that Saulters had exhibited poor judgement and violated department policy by using excessive force against Patmon, who was wanted on a felony drug-possession warrant.

The next day, Oglethorpe County Sheriff David Gabriel announced on social media that he had hired Saulters as a deputy.

If his name sounds familiar it is probably due to the fact that he was recently terminated by ACCPD for an incident where a fleeing felon struck his patrol car while he was attempting to apprehend him. In talking to Saulters the first question he asked was if our citizens supported law enforcement. Without hesitation I assured him they did and that we have excellent people that live in our county. I have no reservations about Dep. Saulters serving this community. As a citizen of Oglethorpe County you will find the wisdom of this decision in getting a deputy of this caliber.

The AADM is organizing people to show up at tonight’s ACC Commission meeting to express their support for Freeman’s decision.

Should I Consider Sex Work?