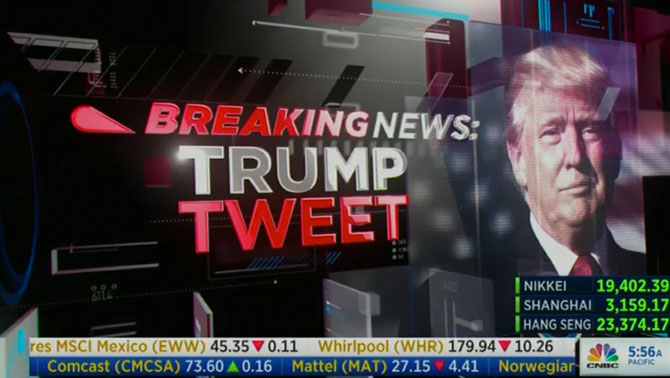 I got drunk last weekend and read all 2,735 tweets that Donald Trump has written since the election in the hopes that Trump’s Twitter feed, collected and searchable on trumptwitterarchive.com, might be a good way to get a sense of the horrors we’ve endured.

Looking at the tweets was like reliving all of the unbelievable moments of this last year in fast forward. But it’s important not to forget that we didn’t always have to deal with the dread of waking up each morning to realize that Donald Trump is president and scramble madly for Twitter to make sure we’re not at war. A year ago, all of this was new to us.

So here are 10 of Trump’s tweets, in chronological order, that capture something about the authoritarian nature of this presidency or the insanity of our social media moment. I left off some obvious favorites (covfefe!) and tended to favor some earlier ones that prefigured later themes.

Even though it was from the interregnum, this tweet is in many ways the Ur-tweet of the Trump presidency. It is only Trump’s fourth post-election tweet, but it captures the spirit of his feed. Validate Trump + attack enemies + attack media = complain about affront to Trump.

This tweet is about the VP-elect’s attendance at the hit play Hamilton, whose cast ended the performance with a short speech expressing the concern we all felt in those uncertain days, while hoping “this show has inspired you to uphold our American values and to work on behalf of all of us.” But Trump took the opportunity to remind us of the depths of his cynicism when he demanded a safe space for powerful white men. Brandon Victor Dixon, who gave the speech, is black, and Trump has made a habit of demanding apologies from black people.

Here the president threatens the funds of a major university in order to support Milo Yiannopoulos, the right-wing troll who had white supremacists line-edit his ghostwritten Breitbart stories, when his speech at Berkeley was being protested. Milo worked for Steve Bannon, who worked for Trump.

This is at the top of the list of authoritarian tweets. It’s got it all.

Foreign policy by tweet. This led to all of the “Little Rocket Man” stuff that almost started a nuclear war and ruined a perfectly good Elton John song.

Walking back an impossible promise while making it look like you’re delivering. This is exactly how Trump ran (runs?) his businesses.

This reminds me of a line from an Oedipus play. Read it again with that in mind. Tragic.

OK, this is two. But he’s attacking the mayor of a devastated city and using racist stereotypes all in one. (He practiced for this after the London terrorist attack.)

9. Nov 29, 2017 07:16:21 AM: Wow, Matt Lauer was just fired from NBC for “inappropriate sexual behavior in the workplace.” But when will the top executives at NBC & Comcast be fired for putting out so much Fake News. Check out Andy Lack’s past!

The complete cynicism of the entire administration becomes painfully clear here. Remember how tough Lauer was on Clinton as he bro-ed it up with Trump? The 16 allegations of sexual harassment against Trump? Yeah. He still went there.

10. Dec 2, 2017 12:14:13 PM: I had to fire General Flynn because he lied to the Vice President and the FBI. He has pled guilty to those lies. It is a shame because his actions during the transition were lawful. There was nothing to hide!*

This one has an asterisk beside it because when it seemed like it could be an admission that Trump obstructed justice in the investigation of Flynn, Trump’s creepy lawyer John Dowd claimed that he actually wrote the tweet.

Bonus Retweet: It’s Trump retweeting Laura Ingraham responding to a story I wrote arguing that Charles Manson was alt-right, so I couldn’t not include it.

The New York Times opinion page tweeted: Nov 20, 2017 9:38 PM: Charles Manson wasn’t the inevitable outgrowth of the Sixties. If anything, he was a harbinger of today’s far right.

Ingraham quoted that and wrote: Nov 21, 2017 8:37 PM: “Far right”? You mean “right so far,” as in @realDonaldTrump has been right so far abt how to kick the economy into high gear.

And Trump retweeted it, somehow both proving my point and completing the circle of my year.