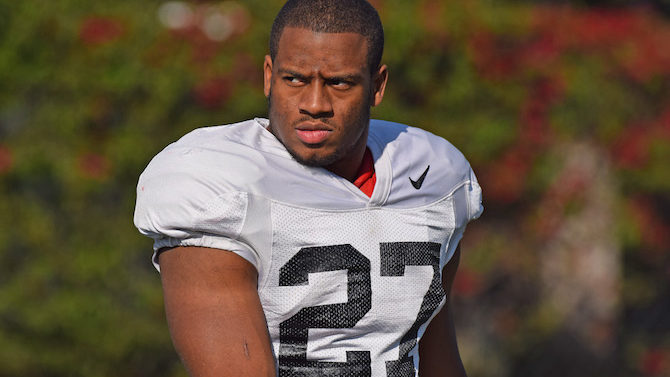 So far, the Kirby Smart Era of Georgia football isn’t defined as much by games as it is individual plays and moments, which is rather fitting. The second-year head coach preaches winning every battle to his players: Don’t worry about the game or what else is happening on the field. Execute your assignment and beat your man. Then move on to the next one and do it again. Then win one more. Then win another. Then another. And another. Every play is a battle, and every battle must can be won. Keep chopping and, eventually, with enough individual victories on enough individual plays, we’ll win the game.

That philosophy was exemplified in Georgia’s 54-48 College Football Playoff semifinal victory over Oklahoma in double overtime at the Rose Bowl. Georgia trailed by 17 late in the first half against a Sooner offense led by Heisman-winning quarterback Baker Mayfield, who, up until that point, had scored at will on the typically staunch UGA defense. A lot of teams would get into that situation and feel like they need to do something big to change the rhythm of the game. But Georgia and Smart kept working and fighting for a victory on every single play.

Look at the Oklahoma drive that put the Sooners up 17 points in the first half: Mayfield marched 88 yards down the field in seven plays to put the Sooners on the two-yard line with a minute left. Based on everything we’d seen up until that point, I don’t think anyone expected Georgia to stop Oklahoma from scoring a touchdown.

And we were right. The Sooners put six on the board a few plays later, but not before Smart threw everything he could at them in hopes of holding them to a field goal. With 25 seconds left in the half, Smart called consecutive timeouts after seeing looks he didn’t like from the Oklahoma offense. Following the timeouts, Georgia stood strong and looked like they might have it in them to win the goal-line stand, but a trick play led to a Mayfield touchdown catch. There were six seconds left in the half, and Oklahoma was set to receive the kickoff to open the second half. It was well within the realm of possibility that the Sooners could be up 24 points in the first few minutes after the break.

But if there are six seconds remaining, Smart is going to try to win every one of them, and he did, with the help of Oklahoma. Tae Crowder pounced on a poor squib kick to give Georgia the ball at midfield. Win. On the next play, Jake Fromm completed a nine-yard pass to Terry Godwin to put the ball on the 38 with one second left. Win. Then Rodrigo Blankenship hit a career-best—and Rose Bowl-best—55-yard field goal to cut the deficit to 14 points at halftime. Win.

At any number of moments in that sequence, Georgia could have decided that there wasn’t enough time to do anything and complacently headed to the locker room. Instead, Smart fought for every point and put Georgia in a spot that, while not enviable, gave us all hope.

I hesitate to give Smart too much credit, though. While he did call a hell of a game, made some fantastic adjustments and put Georgia in a position to mount a comeback, it was the players who executed. Nick Chubb beasted his way through tackles on a 50-yard TD run to get within seven, and Sony Michel added a 38-yarder to tie the game. Dominick Sanders picked off Mayfield and took the ball to the four. Javon Wims made an outstanding TD snag to go up seven. In overtime, Lorenzo Carter blocked a field goal that will go down as one of the greatest plays in Georgia football history. Then, of course, there’s Michel’s 27-yard game-winner, assisted by a Fromm block, that atoned for a fourth-quarter fumble that almost cost us the game.

There were so many moments when the Dawgs could have decided to quit, that the game was out of reach. But they had short memories, forgot the last play and focused on winning the next. A short memory is about the best thing an athlete can have.

That applies to both the bad times and the good. Because as much as I would like to sit here for the rest of my life and relive the glory that was that Rose Bowl victory, there is still work to be done. There’s still one more. And it’s only fitting that in this greatest of Georgia football seasons—sorry, 1980 team, win or lose next Monday, this is the greatest UGA team of all time—the final boss would be the Alabama Crimson Tide and Smart’s mentor, Nick Saban.

The challenge for Smart and his Dawgs will be to come down from the high of this Rose Bowl win and refocus for the national championship. That’s a difficult task, considering the energy and emotion expended Monday night in Pasadena. But I have confidence that they’ll forget what happened last and focus on what happens next. There’s only one more, and they don’t come any bigger than this one.