White Supremacists Are Terrorists, Too 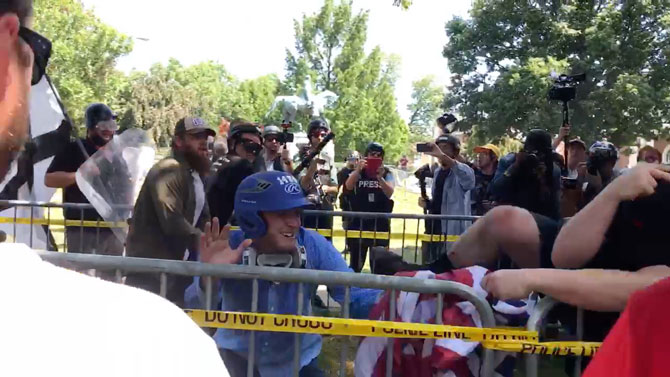 After the automotive attack in New York City last week, Donald Trump called for the death penalty for the perpetrator. “Would love to send the NYC terrorist to Guantanamo but statistically that process takes much longer than going through the Federal system…” he tweeted. “There is also something appropriate about keeping him in the home of the horrible crime he committed. Should move fast. DEATH PENALTY!”

It’s hard not to compare this response to his “both sides” response to the automotive attack in Charlottesville. Trump has built his political career on demonizing Islam, but neither he nor his staff have condemned white-nationalist terrorist organizations, whose ideology they continue to openly espouse.

When Trump was asked whether or not James Alex Fields, who police say drove his car into a crowd of counter-protesters, killing Heather Heyer and seriously injuring 12 others, was a terrorist, he dissembled. “And there is a question. Is it murder? Is it terrorism? Then you get into legal semantics. The driver of the car is a murderer, and what he did was a horrible, horrible, inexcusable thing.”

By calling Fields a murderer, rather than a terrorist, Trump is able to maintain the myth that white supremacist terrorists are bad actors in a field of otherwise “fine people.”

Trump regularly mentions “our heritage” when he talks about the Confederate monuments that the Nazis descended on Charlottesville to defend. And his chief of staff, John Kelly, once laughably called “the adult in the room,” said that Robert E. Lee was an  “honorable man who gave up his country to fight for his state,” and that “the lack of an ability to compromise led to the Civil War.”

Our racist nation finds it easy to condemn all Muslims as terrorists. And, since the “anarchist bombings” of the 19th Century, we’ve also easily associated the left with terrorism. At press time, a “We the People” petition to “formally recognize Antifa as a terrorist organization” had  361,242 signatures. The entire right-wing mediasphere has been flipping out over an imagined “November 4” conspiracy where Antifa was supposed to go door to door killing white people and Christians.

And yet, despite mounting evidence of conspiracy and murderous intent, there have been virtually no calls to declare Vanguard America, or related groups, terrorist organizations.

On Aug. 12, Fields was photographed wearing the uniform and carrying the shield of Vanguard America. The first thing I saw when I got to Charlottesville was Vanguard America members chanting “You can’t run, you can’t hide, you get helicopter rides!” at leftist protesters, whom they then attacked with sticks. The chant was a reference to Augusto Pinochet’s right-wing death squads. The press has been woefully gullible at allowing these organizations to call such threats jokes—even when they are accompanied by actual violence.

Thanks to a series of chats on a gaming app uncovered by the media collective Unicorn Riot, we know that people involved in planning the rallies also “joked” about running people over with their cars. Then Fields followed through by committing murder, not randomly, but against political opponents.

Others involved in Vanguard America have shown that the organization, and not just Fields, had terrorist intent. William Fears, who spent much of the Unite the Right rally in Charlottesville trying to stab people with a flagpole, has identified himself as a member of Vanguard America. He and his brother Colton and another man named Tyler Tenbrink were in Gainesville, FL following the flop of a Nazi rally led by Richard Spencer. They allegedly pulled their Jeep up to a group of anti-fascist protesters and began yelling “Heil Hitler.” Someone in the group hit their Jeep with a baton. The three men then jumped out of their Jeep, and the Fears brothers reportedly yelled “I’m going to fucking kill you,” and “Shoot them!” as Tenbrink got out of the car with a gun and fired it at the people.

“Us coming in and saying we’re taking over your town, we’re starting to push back, we’re starting to want to intimidate back,” Fears told the Gainesville Sun earlier that day. “We want to show our teeth a little bit because, you know, we’re not to be taken lightly. We don’t want violence; we don’t want harm. But at the end of the day, we’re not opposed to defending ourselves.”

Then he justified the Charlottesville terrorist attack carried out by Fields as self-defense. “They threw the first blow,” he said. “I look at it as self-defense, whether he just was radicalized and said, you know, I’m just going to mow these people down, or whether he was in fear for his life, but they threw the first blow, so I’m going to take his side.”

Fears, who says he was previously radicalized in prison, was arrested along with his brother and Tenbrink and charged with attempted murder. So, here we have a situation where a member of Vanguard America justifies a murder committed by another member of the same group hours before allegedly attempting to commit another murder—both actions seemingly based on political ideology. What else do we need to treat Vanguard America the like we do window-breaking leftists wearing black?

Nearly 200 people are facing conspiracy charges based on the clothes they wore at Donald Trump’s inauguration. But because the white supremacists dress like Donald Trump playing golf—the event page for the “White Lives Matter” rally in Tennessee last weekend, noted that  Vanguard America and other groups “will be wearing white polo shirts and khakis”—many Americans can still imagine that some of them are “fine people.”

If suspects wear all black and look like punks, then they are all responsible for any crime committed by someone who looks like them. If suspects have brown skin, then Trump, Kelly, Vanguard America and the rest of the alt-right see them as terrorists, even in the absence of an actual crime. This idea of collective, preemptive guilt is enshrined in extreme vetting. But polo-wearing white guys are never judged as part of a group, even when they wear its uniforms or carry its shields. That’s how whiteness works.