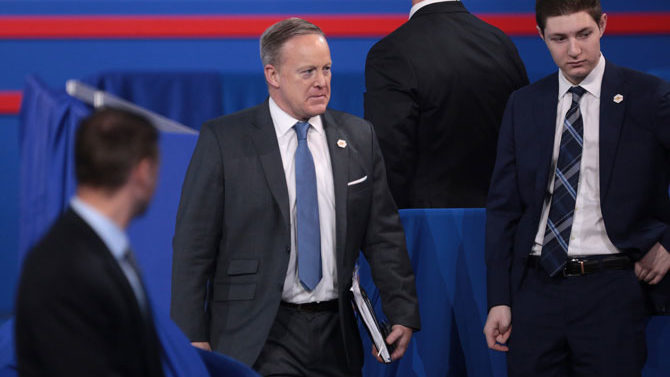 The White House briefing room feels like a mansion’s pool house, but with the carpet of a church basement. On the eve of the summer solstice, after a week without an on-camera press briefing, the room smells like a grill doused with too much lighter fluid. Cameramen and techies move around in loose clothes and floral shirts.

“A barbecue?” one reporter says. “Are we invited?”

“I feel like we’d be the main course,” another says.

It has just been reported that Sean Spicer, the combative and sometimes dishonest press secretary, may be moving to a new position in the White House. But he is scheduled to be here today. He walks out even pastier than on TV. The screen eats the makeup; in person, it is cakey.

“I’m right here. So you can keep taking your selfies and selfie photos,” he says at one point.

Reporters who knew Spicer back in the day, when he was a flak for various Congress members, thought he was a good guy. But this gig started bad.

“This was the largest audience to ever witness an inauguration—period—both in person and around the globe,” Spicer falsely stated on the second day of his job, after berating the press for their coverage. His performance prompted Kellyanne Conway to coin the phrase “alternative facts.”

Like flaks all around the country, the Trump press team believes that social media makes pesky reporters unnecessary.

Someone asks Spicer about the off-camera briefings. “We have a tremendous respect for the First Amendment—your ability to do your job and report and seek out ideas—and we’re going to work with you,” he said.

During the campaign and at his recent rallies, Trump has relied on the press as one of his primary enemies—the wrestling heel. “Fake news” applies to any story he doesn’t like.

But often we are enablers. Trump, the NBC star, shares a world with TV reporters that the rest of us will never access. Cable news did more to put Trump in the White House than anything else.

The media’s adoration of Trump didn’t begin with cable and this campaign. “There were four stories about Trump in one day’s issue of The New York Times newspaper,” the great newspaper columnist Jimmy Breslin wrote in 1990. “On television that night, all I saw was announcers genuflecting as they mentioned Trump’s name.”

We love the Trump show. Now the lovers—the press and the president—are quarrelling.

“The bull is back,” said a reporter waving a small red cape as he walked into the briefing room a few minutes before Spicer came out in front of the lights.

In an interview with Laura Ingraham—one of the names being floated as his replacement—Spicer justified the off-camera briefings by claiming reporters “want to become YouTube stars.”

He’s right. But it’s mostly the new-right media figures who use the briefings to take selfies making ambiguously racist hand gestures or grandstand on Periscope like Pizzagate guru Mike Cernovich. After the briefing on May 1, Cernovich made a live-streaming stink, loudly demanding to know why the press corps wasn’t disavowing violence against Trump supporters.

These new right media figures act like rebels while primarily serving up propaganda for the president.

On May 12, after Trump contradicted his own communications team on the reason former FBI Director Jim Comey was fired, he suggested via Twitter that “maybe the best thing to do would be to cancel all future ‘press briefings’ and hand out written responses for the sake of accuracy???”

CNN’s Jim Acosta came out after one of these briefings, on the solstice, and ripped the administration. “The question was asked whether the president has the ability to fire Robert Mueller. You won’t hear or see the answers to those questions. You’ll only be able to read about it.”

Acosta’s general disdain for print is telling. He is in a fury over losing his TV time, even if it is for the sake of the people. But he has not, nor has anyone in the briefing, asked about Aaron Cantú, the reporter who is facing decades in prison for following the group that used black bloc techniques to disrupt the inauguration.

Cameras are important, but there are more serious violations of the First Amendment happening. In his postmodern presidency, Trump has succeeded in making the briefings about the briefings.

It will get worse.