Steve Bannon Is No Intellectual Powerhouse 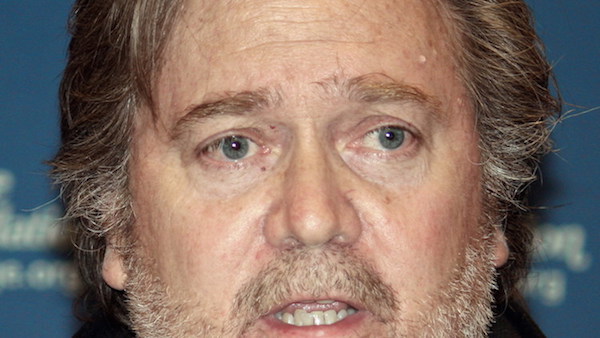 White House assistant and chief strategist to the president, former Breitbart News capo and, according to Twitter, shaved Garfield Steve Bannon is the big brain behind Donald Trump because, well, he’s read some books and tells other people to read some books.

Politico‘s “What Steve Bannon Wants You To Read” describes Bannon recommending Sun Tzu’s The Art Of War to friends and associates, and digging Nassim Nicholas Taleb’s Antifragile. So basically, a book nearly every edgy business bro reads and some sub-Gladwellian pop-psych from the author of another contemporary biz doof classic, The Black Swan. You might be asking, “where’s the Ayn Rand at?”

“Steve Bannon’s Book Club,” a New York Times opinion piece by Marc Tracy, mentions meeting Bannon at the airport around Christmas and peeping what he was reading: The Best and the Brightest. Tracy describes it as “David Halberstam’s 1972 history of the strategic errors and human foibles that birthed the disastrous American involvement in the Vietnam War.” In other words, precisely the kind of book you’d hope someone involved in political and military strategy might read, though nothing impressive.

Huffington Post’s “Steve Bannon Believes The Apocalypse Is Coming And War Is Inevitable” meanwhile, discusses how Bannon embraced William Strauss and Neil Howe’s The Fourth Turning, a book that says the world functions across four-stage cycles punctuated by crises and awakenings. It’s mildly compelling theory that tries to explain the inexplicable or get us a little closer to an explanation, but for Bannon, it’s the key to all mythologies.

This is what dumb people do by the way: they pick a book, reduce it to dogma and then funnel the entire world through it and cobble together an identity surrounding it along the way.

Another New York Times story, “Steve Bannon Cited Italian Thinker Who Inspired Fascists” calls Bannon “an avid and wide-ranging reader” (and links to the aforementioned Politico article as further evidence) and notes that Bannon knows the work of Italian philosopher, Julius Evola, a favorite of the far right. “His awareness of and reference to Evola in itself only reflects” how much of a reader Bannon is, the story notes. I’m less convinced. Reading fringe, right-wing philosophers who think white people are “the Children of the Sun” raring to be reawakened is mostly a sign of how far people like Bannon are willing to get lost in the racist asshole weeds to locate their opinions explained back to them in high falutin’ theory.

If the syllabi offered up above is any indication, Bannon reads how he looks—like a basement-dwelling, Jimmy Buffett fan-looking dad (and according to his wife’s divorce papers, a pretty terrible dad at that) who leans to the right real hard sometimes. You know, some business books, some shit about process and cognitive thinking, some soft-hard history, a bunch of blogs, a stumbled upon deep cut here and there, though nothing that a quick dive through some racist subculture’s Wikipedia entry wouldn’t recommend.

This “Bannon is brilliant” angle may end up trolling the power-hungry Trump, who, we all imagine, will only tolerate Bannon for so long if Bannon seems smarter than him. But it is also a product of a collective desperation to make some sense of this crazed administration and Bannon talks a good game at least. He is a rarity in the Trump regime: intentional.

We have seen this hustle before. It was said that Karl Rove pushed George W. Bush as a reader because the two war criminals were in some kind of “who can read more books in a year” macho pissing contest together. Their lists were Bannon-esque batches of bestselling history and dude-friendly beach reads—plus, Albert Camus’ The Stranger. That said, not being smart does not mean you’re not not dangerous. The major mistake during the Bush era was that a byproduct of making it clear that Dubya was a bit of a dolt, the left neutered him, and he became a punchline instead of a dangerous leader and later on, just a charming retiree painting dogs and self-portraits. So let’s not underestimate Bannon either, but hold off on giving him all this credit and avoid indulging what MTV News’ Ezekiel Kweku recently called “liberal fan fiction.”

Bannon is the smartest idiot in the room, carrying himself with contrarian swagger. He’s the “why don’t we have a white history month?” asshole from your high school morphed into a smarmy dorm room douche #actually-ing everybody over beer pong matured into a tubby, cloistered grown-ass elite still not listening to anybody. His ideas are teenaged ones, specifically teenaged white male ideas—that evil is honest, that the world is tilting towards ruin, and that it’s all so obvious if you just read the right books man. A hot mess of nihilism and idealism. Will to power as pop.

It is comforting to append meaning to a fraud. We want things to make sense and for people, even the wrong and terrible, to be well-intentioned and sane. But Bannon has laid out his approach loud and clear. “Lenin wanted to destroy the state and that’s my goal too. I want to bring everything crashing down and destroy all of today’s establishment,” Ronald Radosh recalled Bannon boasting years ago. And then there’s, “Dick Cheney. Darth Vader. Satan. That’s power.”

As Breitbart News slowly slid into relevance, there was an assumption by liberals that the people writing this stuff were, while full of shit, afraid and under the assumption that law and order and morality was very much needed. But given Bannon’s Lenin shout-outs, it’s apparent that his goal was not preservation by any means but chaos. The bonkers racist headlines that’ve been Breitbart’s bread and butter make a lot more sense when they are framed as chaos-stirrers rather than misdirected fear and outrage.

Breitbart’s readers, most of whom buy some of the site’s bullshit but not all it, saw its stories as a series of warnings about how far we’ve fallen. They contorted Bannon’s Breitbart fake news bombs until they offered up a lesson or moral center because they yearned for that and all the MSM outlets were lying to them, they thought. Foisting Foucault on the rust belt, then, is the one truly amazing thing Bannon’s Trumpism has done. He told pissed off Tea Party types that truth—whether of journalism, science, intelligence agencies—was really just a function of power and each of these groups promote the truth they promote because it enhances their power.

We’d be wise to consider Bannon’s smart guy shtick as part of the chaos. These news stories and thinkpieces, which take this dope’s basic-ass reading habits seriously and puff them up into something profound, help produce a propaganda that’s very useful to Bannon and Trump. When we give Bannon the honorific of intellectual powerhouse because he’s read The Art Of War—a favorite of Patriots head coach Bill Belicheck, a book Gordon Gekko recommends in Wall Street and one that Bone Thugs-N-Harmony named a double album after, mind you—or an arcane white supremacist, he becomes a devious outsider “disruptor.” That is how he’d like to be viewed.

Instead, he should be seen as a fucking pseud with some reading under his belt, full of half-baked ideas, bad faith arguments, and zero goodwill, suddenly handed a lot of power.

We give Steve Bannon all of this intellectual heft at our own peril.