Horsin’ Around: Equus and More Shows to See This Fall 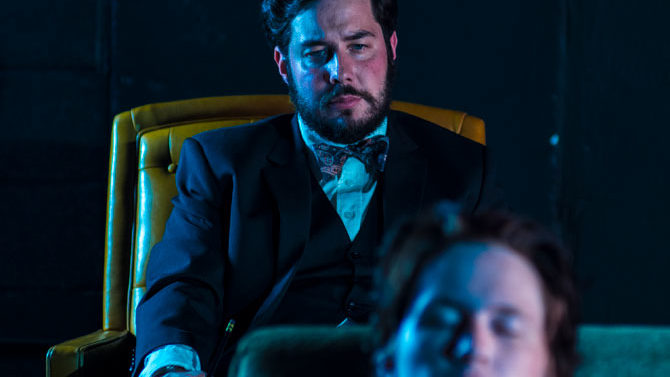 Equus Ask some people if they’ve heard of Equus, and all they can think of is naked Harry Potter (Daniel Radcliffe’s stage debut in 2007). Theater fans are more likely to know this is as a Tony Award-winning classic that has featured stars like Anthony Hopkins, Richard Burton, Anthony Perkins and Leonard Nimoy as psychiatrist Martin Dysart. (They’ll know the Harry Potter connection too, of course.)

Bored and dissatisfied with his own life, Dysart (John Galas) undertakes a sort of psychological detective story as he examines teenager Alan Strang (Zachary Pareizs), who has inexplicably blinded a stable full of horses in a fit of violence. Alan doesn’t just love horses. He loves them, to the point of worship and sexual fixation. He’s got a troubled relationship with his parents (Shanon Weaver and Robyn Accetta), and his excessive veneration of horses has not helped his romantic life. As Dysart attempts to get to the heart of Alan’s painful passions, he wrestles with his own existential crisis.

Director Ray Paolino uses a dreamlike, ritualistic approach to the stories and events in the play that has been a favorite of his since seeing it in its original Broadway run. With powerful design and a strong cast, this team is bringing their best to UGA Theatre’s Spotlight on the Arts offering this fall.

The Rosetta Theatre Project Imagine a museum display in a black-box space. There’s a low platform with a table and two actors (Luis Perez O’Farrill and Eva Ramirez) in motion-capture suits, plus a screen in each corner. If you stay for about an hour, you can see four versions each of a scene from Shakespeare (Romeo and Juliet) and from Molière (Tartuffe).

O’Farrill and Ramirez will silently perform the tomb scene in Romeo and Juliet while different animated versions of themselves appear in varied settings on the four screens. On one screen, they will appear to be in London’s Globe Theatre. Pre-recorded voice actors (Atty Siegel and Justin Hall) perform the original words of the play to go with the physical actors’ movements. On another screen (with Pedro Alvarado and Darcy Russell), it looks like they’re in present-day Athens, doing a paraphrase of the scene in everyday American English. There’s a contemporary scene set in Paris, with the words not just translated but paraphrased into modern French (with T. Anthony Marotta and Emily Myers Shirley). The fourth scene appears to be in the Palais Royale in the 1880s (with Leah M. Merritt and Phillip Brankin), using Victor Hugo’s translation of Shakespeare into French.

As if that doesn’t sound exciting enough, there’s also original music composed by Peter Lane, unique to each scene but also written as separate tracks of one piece that you will hear when the scenes are performed simultaneously.

Then, it all happens again with the same voice and movement actors, with the scene from Tartuffe: the original as performed at the Palais Royale, in contemporary Paris, in everyday English in suburban Athens and an interpretation of how it could have been performed in Shakespeare’s time and language, which dramaturg Sujata Iyengar has called “Fakespeare.” Next, the Romeo and Juliet scenes begin again, followed by Tartuffe, on a continual loop.

It’s an experimental, multidisciplinary performance that offers a truly singular experience. According to director David Saltz, “It is designed to appeal to people in a wide range of different fields, including theater, music, art, English, French, history, animation and gaming.” There’s no excuse for missing this uniquely inventive performance, which is free to the public.

The Rosetta Theatre Project is presented by the UGA Department of Theatre and Film Studies, the Willson Center for Humanities and Arts, the national conference of the Alliance for Arts in Research Universities (A2ru) and the international conference “Scenes in the Other’s Language/Scènes dans la langue de l’autre” in the Dancz Center of UGA’s Hugh Hodgson School of Music Friday, Nov. 2 from 3:30–7:30 p.m. and Saturday, Nov. 3 from 5:30–7 p.m. For more information, visit drama.uga.edu.

The 25th Annual Putnam County Spelling Bee Born in improv and workshopped from out of state to Off-Broadway all the way to Broadway, this musical comedy features an ensemble of quirky, lovable spelling-bee hopefuls (Jason Baird, Paula Gerhardt, Graham Fenn, Daniel Hawkins, Audrey Burkes and Amanda Rempe). The grown-ups in the room are former spelling champion Rona Lisa Peretti (Amy Miller), the queen bee of the event, with fellow emcee Douglas Panch (J.J. Jackson) and “comfort counselor” Mitch Mahoney (Kerri Brooks), who isn’t very comforting. There’s audience participation, teenage anxiety, an appearance by Jesus, the agony of defeat and an unfortunate erection in this fun night of musical theater for ages 18 and up.

The 25th Annual Putnam County Spelling Bee, by William Finn and Rachel Sheinkin, is presented by On Stage After Dark with OnStage Walton at the Wayfarer Music Hall in Monroe Nov. 2–3 at 8 p.m. Tickets are $25 and include one drink ticket plus snacks and refreshments. For tickets and information, visit onstagewalton.org.

Newsies It’s the little guys vs. big money in Athens Creative Theatre’s production of the musical that’s based on the Disney movie inspired by the true story of teenaged newspaper delivery boys who formed a union to stick it to the man in 1890s New York City. The Broadway production won several Tony and Drama Desk Awards, and the album even won a Grammy, but it’s no surprise considering the score is by Alan Menken, who gave us some of our most favorite Disney music (Tangled, Aladdin, Beauty and the Beast and much more).

You’re a Good Man, Charlie Brown The kids of Brightstone are the beloved Peanuts characters in this easygoing musical featuring the trials and tribulations of childhood. Each show has a slightly different cast, with some actors appearing in more than one. Featuring Evan McCall and John Wheeler as Charlie Brown along with his friends, classmates, and everyone’s favorite dog, Snoopy (Carly Cockfield, Lainey Lyle and Julia Dempsey).

The Amazing Acro-cats For something completely different, you can experience feline vaudeville with Tuna and the Rock Cats. This troupe of actual cats aren’t just freeloaders lazing around the house. They’re doing stunts, tricks and even performing as the world’s only all-cat band (that we know of). To keep it interesting, there’s a chicken, too: Cluck Norris, who plays the tambourine. Directed by Samantha Martin, it’s not just an extraordinarily offbeat night of variety performance—it’s a chance to support cat rescue and adoption.The Amazing Acro-cats are presented by Rock Cats Rescue at the Morton Theatre Thursday, Nov. 15 at 7 p.m. Tickets range from $19–$39 and are available at brownpapertickets.com/event/3625265. For more information, visit circuscats.com.