From Cabaret to Ntozake Shange: New in Local Theater 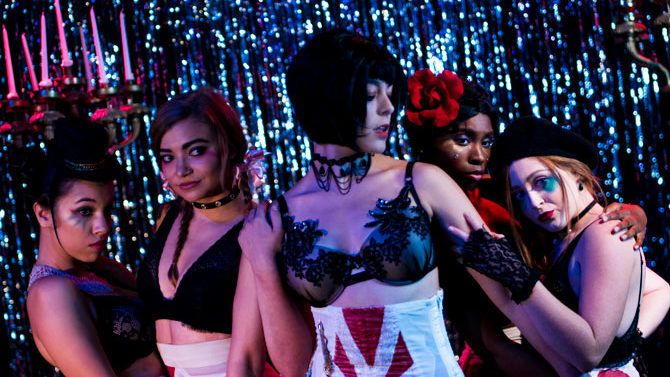 Cabaret In 1966, the year Cabaret debuted on Broadway, Robert Kennedy spoke of a curse “which says, ‘May he live in interesting times.’ Like it or not, we live in interesting times. They are times of danger and uncertainty, but they are also more open to the creative energy of men than any other time in history.” The artists of our own interesting times, like the ones portrayed in this popular musical, are faced with this question: How do we go about our lives and artistic pursuits during a dark time when nationalists and Nazis are making a lot of scary noise?

UGA Theatre is pouring all of its creative energy into Cabaret. They’re pulling out all the stops in every facet of the production, set in a seedy nightclub in 1930s Berlin as the Nazis are coming into power. Director Freddie Ashley, the award-winning artistic director of Actor’s Express in Atlanta, does not shy away from the clear contemporary parallels found in this classic musical. “There is a cautionary tale here, to be sure,” he says, “about the dangers of looking the other way when authoritarians are breathing down your neck.”

Cabaret is one of the greatest Broadway musicals. The original production won eight Tony Awards and the film won eight Oscars, with multiple Broadway revivals also winning Tony and Olivier awards. In addition to one of the top professional directors in the state, audiences here can expect the best in design and performance as well. Larry Cox Jr. (emcee of the Kit Kat Klub) and Katie Butcher (Sally Bowles, a singer at the Kit Kat Klub), graduate actors who have given particularly powerful performances in Sweeney Todd and Uncanny Valley during their time at UGA, are literally doing master work—these are their thesis roles—along with a cast of top-notch undergrads who can be expected to give don’t-miss performances as well.

In addition to the denizens of the Kit Kat Klub, there’s an aspiring novelist, Clifford Bradshaw (Eric Baylot), who falls in love with Sally. Another romance is blooming between Fraulein Schneider (Taylor Bahin), who runs the boarding house, and resident Herr Schultz (Matthew Suwalski). Sally gets in trouble at work, Cliff’s friend Ernst (Jake Berne) turns Nazi, and boarding-house resident Kost (Anna Alfredsson) starts trouble over the fact that Herr Schultz is Jewish. Meanwhile, the show goes on at the club, since life is a cabaret, after all. It’s a world of decadence and decay looking into a grim future, but one we can enjoy for its music and passion… as long as we heed its warning.

for colored girls who have considered suicide/when the rainbow is enuf Ntozake Shange’s powerful “choreopoem” started in the bars and coffeehouses of San Francisco before it was produced in New York City and opened on Broadway in 1976, where it won Tony and Drama Desk awards and nominations. It’s been published in book form, adapted for television, revived on Broadway, made into a major motion picture and performed all over the world. In his review of the film for Film Journal International, David Noh described the play’s Broadway debut as “a bracing, literal explosion of color, black power and feminism” while railing against Tyler Perry’s “ham-handed” adaptation for film. For the power of Shange’s words, the play’s the thing to see.

The various poems dance from heartbreak to violence to strength. There are laments of love gone wrong, celebrations of music and testimonials that resonate with Tarana Burke’s #MeToo campaign, with expressions of the love of words, colors and sisterhood. These women go through hard times, but as Ben Brantley of The New York Times writes, “there is undeniable triumph in the very act of the telling.” Especially when they tell their story together, moving “to the ends of their own rainbows.” For this performance, it’s UGA students telling the stories, directed by Regina M. Oglesby.

for colored girls who have considered suicide/when the rainbow is enuf, by Ntozake Shange, is presented by UGA’s Black Theatrical Ensemble in the Cellar Theatre of the Fine Arts Building Thursday, Nov. 9–Saturday, Nov. 11 at 7 p.m., with a 2:30 p.m. matinee Saturday, Nov. 11. Tickets are $8, $5 for students in advance, $8–$10 at the door and available at UGA’s Tate Center box office or online at bit.ly/BTETix. For more information, follow @UGABTE on social media.