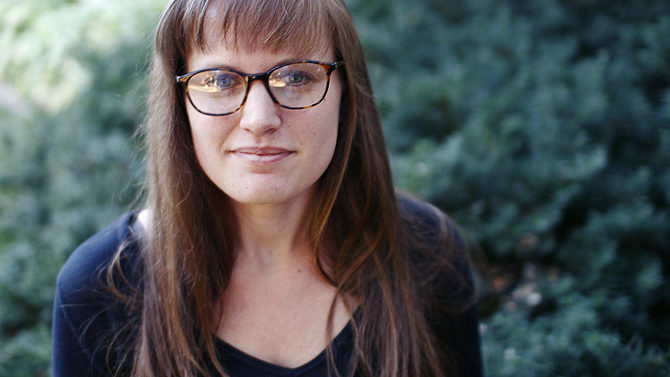 Place is of the utmost importance to writer Lindsay Tigue. She is deeply informed by the natural world, and the spaces she lives in create their own architecture in her work.

Tigue writes both fiction and poetry. She focuses on “how people move through space and interact with each other. How a place affects a person and their relationships to other people and the world around them.” All of her work is infused with a sense of looking for strangeness in everyday occurrences—like that game when you were a kid of saying a regular word over and over again until you didn’t understand it anymore. Toy boat. Toy boat. Toy boat?

A native of Michigan—land of sand dunes, snow storms and lakes that look like oceans—Tigue moved to Athens to study in UGA’s English and creative writing PhD program, where she is currently a student. She taught last year at UGA and just started her graduate assistantship at The Georgia Review. Tigue recently won the Iowa Poetry Prize for her book System of Ghosts, which will be published by the University of Iowa Press in April 2016.

Here is a prose poem from System of Ghosts. The poem won the Indiana 1/2K Award and first appeared in the Indiana Review. It is written in a straightforward, almost journalistic style that belies the deep emotions running beneath the surface. There are evocative images and strangely haunting actions, but very little discussion of feeling. Instead, readers travel with the poet through a series of seemingly unimportant moments and must mine for themselves the emotions and meaning behind the words. The interpretation may differ from person to person and place to place.

“Michigan Central Station Has Been Closed Since 1988”

When I go visit you on the edge of an actual mountain in Colorado, we take the cog railway to the top. Toothed rack rail that jerks and chugs. We pay thirty dollars to go up and down and the grade steepens and a baby cries grabbing her ears, but we pass some of the oldest trees on earth—ancient bristlecone pines I know we’ll forget. Past timberline, the train inches and I wait to roller coaster up and away from here, but we reach the top and the conductor says, forty minutes!, points to a concession stand selling nachos and we hate nachos. But you love trains, you say and I tell you I do. That night, we eat at Pizza Junction in an old sleeper car. The food isn’t great like we want it to be and I touch the wall’s wood paneling and ask you why can’t all the stations become train stations again? And you say, while we’re at it, let the mountains be mountains.

A week later, I leave you and fly home in the dark to find spilled vinegar in the kitchen and, for a moment, think it is blood. I sit on the floor looking at the stain I’ll have to scrub best-I-can from the linoleum and I stare at the guilty cat as he jumps from counter to floor and stumbles his landing and licks his leg. I love to catch an animal pretending.

That night, I don’t even tell you I’m home. I leave my packed suitcase on my bed, unlock my bicycle, and ride toward empty tracks, toward the nail salon in the old depot. I look for hills—Midwestern land isn’t as flat when I’m pedaling. I wish I could bike all the way to Detroit, to the old abandoned station that looks like the end of time. You once told me that in 1912 it was the tallest rail station in this world, that it was modeled after ancient Roman bathhouses. I stop in front of Happy Nail Spa where a woman sits in the dark sanitizing clippers and I stand over my bike and pick up a discarded pop can, shake dirt on the toe of my shoe and try to remember the last time our faces touched. I watch the sign’s fluorescent “N” flicker and buzz and I dream up trains flashing past me and I see all those passengers like ghosts crowding the station. I see people rushing in and out of a place. At all hours of any day.

Send your literary events and brief prose or poetry (along with a bio) to poetlandia@flagpole.com.