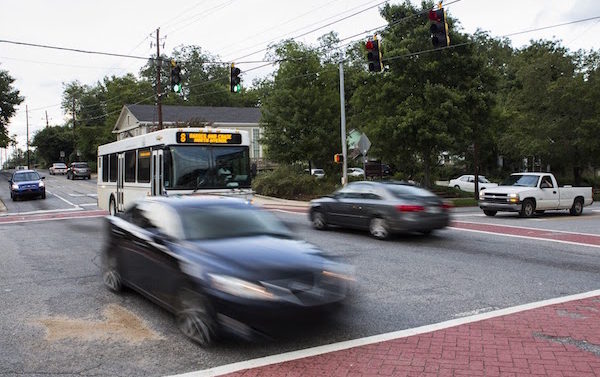 The Athens-Clarke County Commission voted Tuesday night to delay repaving Chase Street to study the possibility of bike and pedestrian safety infrastructure along the corridor, and to reject a rezoning request for a subdivision in Five Points.

As part of the commission’s road-diet policy, the commission can reconfigure four-lane roads to three lanes with bike lanes whenever the road is repaved. However, only a short stretch of Chase Street near the Loop that’s being repaved is four lanes. And ACC’s Complete Streets policy only applies to roads that are being completely rebuilt, not repaved.

“A model Complete Streets ordinance would require this type of analysis to be done without us discussing it,” Commissioner Jerry NeSmith said.

Based on Commissioner Melissa Link’s motion, repaving Chase Street has been pushed back to fiscal 2017. In the meantime, the ACC Transportation and Public Works Department will study safety measures along the entire corridor from Prince Avenue to the Loop. While this is unlikely to mean bike lanes, since most of the street is too narrow, it could include things like additional crosswalks near Chase Street Elementary and elsewhere along the corridor.

• deny developer Jared York’s request to rezone three acres at the Springdale-Rocksprings Street intersection for what he called a 14-unit “aging in place” development. Neighbors called the development too dense and were skeptical that it wouldn’t become student housing. York served notice that he is considering suing to overturn the decision.

• reject the single $12 million bid for sidewalk and utility improvements on Clayton Street downtown. Only $4 million is budgeted for the SPLOST project. Commissioners said they will reconsider its scope after previously receiving no bids.

• order TPW staff to study a Downtown Master Plan proposal to close the block of Newton Street near Prince Avenue for an outdoor cafe, which has drawn opposition from some Bottleworks business owners. Public hearings will be held sometime this fall.

• approve a contract to install and operate a phone system at the new jail opening in November, which drew the ire of Athens for Everyone members because the contractor will kick back $250,000 a year from inmates’ collect calls to the ACC government, although it is a common practice to offset operating expenses at jails.