“Writers are sort of a bunch of loner people. You don’t just meet ‘em,” poet Aralee Strange used to say. Seeking to combat that isolation, she founded Athens Word of Mouth, an open mic poetry reading that meets the first Wednesday of every month at The Globe.

Writers are often seen as singular creators, holed up in their garrets with inky fingers or eyes dulled by the glare of a laptop screen. While this may be true for some, most writers—both those you bump into at Hendershot’s and those you read in high school English—thrive on community. Writers form deep personal and creative bonds with other artists, sharing their work, asking questions, editing and giving suggestions. The UGA creative writing workshop was developed as a way of providing this network at an institutional level, but groups like Word of Mouth continue the tradition of a community-based space of challenge and collaboration. 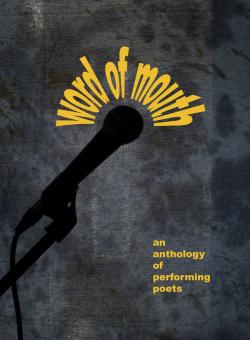 Strange started Word of Mouth in 2009 as a place for local writers to “sign up, mouth off, pay attention.” As an open mic night that also hosts featured readers, Word of Mouth provides a space for writers to share their work while listening actively to other local performers. Anyone can sign up and read their writing.

Though Strange passed away in 2013, Michelle Castleberry, Alex Johns and Mark Bromberg now run the event. This September, they edited Word of Mouth: an anthology of performing poets (Bellemeade Books, 2015) to document the “strange confluence of voices” found on The Globe’s stage. The anthology is a varied and diverse mix of 50 local writers’ words: There are villanelles, odes, love poems and rants, as well as portraits of the writers. In the anthology, the poets address a broad range of ideas, yet the focus is on personal experience, celebration, social commentary and call to action.

The introduction insists that the book itself is a sort of “ghost photography” that gives a sense of the poems but “with less movement.” Word of Mouth celebrates the performance and communal aspects of poetry—written down, these poems catch an echo and record a moment, but they are not the moment themselves. The website has photos, poems and live recordings, but to experience Word of Mouth in full, head to The Globe the first Wednesday of each month at 8 p.m., or 7 p.m. if you want to sign up to read.

Here are excerpts from two poems by Word of Mouth performing poets. In “the mercy,” Michelle Red Elk reflects on birth, death and identity through dreamlike lyricism:

Jay Morris begins “asl” by documenting the racism he has encountered on social media and then shifts to the staggering burdens carried by gay black men:

43% of black gay youths have thought about committing suicide.
And how many have you actually heard about that did in this wide
Net of information that we call the media.
Because I could count for days the number of
Tyler Clementis, Jamie Hubleys, Ryan Halligans, Bobby Griffiths, and Jamey T. Rodemeyers
Who ended it because they felt mired in the unyielding hatred of a small number of small minds
But what about the Raymond S. Chases, Carl Joseph Walker-Hoovers, Jaheem Herreras, and Joseph Jeffersons
Whose stories were confined outside the limits of the mainstream
Who decided that their deaths weren’t important enough to be screened.
Were they the same people who decided that my people’s only role in their community
Was as a vector for HIV
For AIDS
Have you ever wanted to waive a birthright?
When those oh so subtle stares that
Say you don’t belong here
Drive home the screws that reinforces
The locks
You feel locked in your own body
Bound in your skin like a book
No one has the time to read like you
Were penned by an author on the side who lost the war
Like instead of Mary Magdalene you were just some common whore
That Jesus laid his hands on once or twice
In the testament and if you ever try to testify
They’ll silence you and every practiced line
That’s the cultural atmosphere
The social environment
Plants are at an advantage when it comes to growing because when they are raised
In an incompatible environment they just die
But people are not so lucky
They find any way to grow
Even if it’s crooked
Even if it’s with their heart growing inside out on their sleeve
I’m sorry
I can’t be another Raymond Chase, Carl Joseph Walker-Hoover, Jaheem Herrera, or Joseph Jefferson
I can’t be part of that 43
I have to try
Any way I can

Send your literary events and brief prose or poetry (along with a brief bio) to poetlandia@flagpole.com.