Avid Clerk Will Walton Is Working on His Second Novel 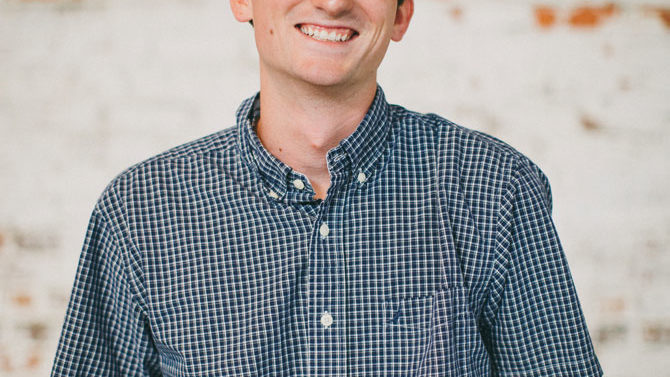 If you’ve walked into Avid Bookshop, you’ve probably been helped by, cheered up by or laughed with Walton. He’s full of excellent recommendations and candid reviews. He’s the reason online booksellers can’t hold a candle to shops like Avid. His presence is reflected in his writing: Anything Could Happen is considerate and warm; it delights in the joys of rich friendships, loving family and dance parties; yet it’s also funny, sharp and irreverent.

While the reverend preaches, a small-town teen is realizing he’s love with his best friend. Anything Could Happen, which received comparisons to Boy Meets Boy and The Perks of Being a Wallflower, is the story of his decision to do something about it—now.

Walton is from Perry, a small town near Macon. He moved to Athens in 2010 to attend UGA and hasn’t left since. He is currently working on his second novel, Strange Loop, which is excerpted below. In Strange Loop, 16-year-old Avery is recovering from injuries he sustained in a car crash, but he refuses to tell anyone about the events that led up to the accident. Even in this short excerpt, we learn a lot about Avery as he waits in the doctor’s office in a wheelchair. We see his love of music, dry humor and keen sense for detail that brings the fear and boredom of a doctor’s office right to the reader. Look for Strange Loop, coming out on Scholastic in 2017.

I was alone inside the office. Worth mentioning: graying fern, some pink ribbon tacked to graying corkboard, a slight window, which, on the cloudy day it was, helped nothing. I was alone and felt it, too: all be-chaired, be-wheeled—a set of wheels, my imaginary dad said, all your own. He passed me some keys. In our embrace, we rubbed off scales, which, when we let go, dissipated. I could hear things outside. People greeted each other in the hallway. Behind that, something landed, metallic-, heavy-sounding, as though dropped from a desk. Behind that, someone hacked a serious cough—Pal, I was sure. I filtered the sounds, reassembled the layers, experimented with volume. I remixed what I could hear from the gray office with the graying corkboard and the gray fern on the gray day—I called it “Gray,” for obvious reasons.

Then the door swung open.

I replaced all the sounds in a hurry.

“Hoo!” Doctor Dawn expressed. She stepped inside. “Sorry I’m so I’m late! I swear, traffic was—it was insane.” Doctor Dawn wore purple, lizard skin gloves that were awesome. When she stuck a hand out to shake, I said, “Those gloves are really awesome.”

I unlocked the brakes on my wheelchair and scooted back to give us space. As she took the seat across from me, she eyed the fern. “That thing is dead,” she said. “We should get it out of here.”

Send your literary events or poetry or short prose, along with a brief bio, to poetlandia@flagpole.com.