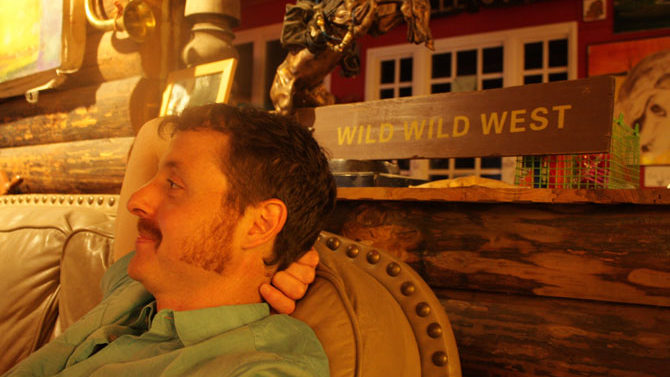 Timothy O’Keefe’s newest poems are in a series he calls “quadrilaterals.” For those of us who have forgotten our math (like me!) quadrilaterals are four-sided, two-dimensional shapes. In terms of his poetry, this means short poems of only four lines apiece. Another rule for the quadrilateral is that its angles must add up to 360 degrees. So within this flat, closed shape is every possible angle, just as within a short, closed poem can be the whole of a life, the whole of a world. Or maybe not—perhaps just a tiny glimpse. That is enough, too.

Since moving to Athens, O’Keefe says his ear for dialogue “has been on high alert.” He is attuned not just to the shifts in accent from his native New Jersey, but to “all the ways that dialect pairs with body language to create wholly different presentations of self.” It is this deep listening that is present in his writing: how the sound and placement of a word can create a new environment and meaning from well known phrases.

O’Keefe moved to Athens to teach at Piedmont College, where he is an assistant professor of English and creative writing and curates the Piedmont Arts Collective. His first collection of poems, The Goodbye Town, won the FIELD Poetry Prize and was published by Oberlin College Press in 2011. The generosity of the “Athens ethos” won O’Keefe over right away. For him, the city “strikes a great balance between the urban/urbane and down-home familiarity.” A self-described Normaltowner, he loves to play tennis and is on the lookout for someone to play with. Any help, dear readers?

Here are two examples of O’Keefe’s “quadrilaterals.” In the first poem he retells the myth of Proteus, a Greek god of the sea known for his shape-shifting abilities. This poem considers how time and memory alter our conception of people and objects.

“QUADRILATERAL : AND PROTEUS WAS A GROUP OF SMALL CHILDREN”

Years in the hollowed-out oak, now a cello soundtrack :
That one breaks his nose and gains a friendship :
That one is now her mother’s age in some first memory :
We chased night bugs, their will of sound, though the sound had none.

Read this next poem aloud—you’ll stumble through some parts and float through others, and remember how strange some common words are.

“QUADRILATERAL : NEW JERSEY AFTER ALL”

Postcards and prop planes. Red letters on the sky :
Thirst to meadow, meadow to not-come-back :
Knowledge is a knower, each window’s train :
The sand forgives what it cannot fill. Why wait.

And let’s close with a poem for Robert Duncan, beloved American poet and gay rights mentor:

Trace me simple—
a figure the children can’t
not color in, circle
of an unsteady hand—
if never more than this flame
under the hill, a flowering index,
this black dog chasing an atmosphere.

Crayon-lit trunks
crush to paper, millennia to sheaves we
populate—a simpering June,
a julep, some heirloom fear
we couldn’t look up
the picture for, the meaning for.

Send your literary events and brief prose or poetry (along with a bio) to poetlandia@flagpole.com.