“Extended Selfie” by Ally Christmas might get the prize for most uncomfortable portrait in the new exhibit “Ringer: Contemporary Portraiture.” Curated by John W. English, this deeply satisfying show opened last night at ATHICA. More than one work in it gave this viewer the heebie jeebies.

One of several video works on view, “Extended Selfie” opens with a woman (Christmas) seated in an over staged setting, posed and still for an extended selfie.  Her disarming and artificial smile metamorphoses over the 14-minute duration of the film into stillness and, later, boredom and discomfort.

Just like encountering someone working a smile for a selfie in real time, you avert your eyes and feel awkward. Encountering Christmas’ work, your instinct is to look away, but then you remember that, here, it is okay to stare. You are an intentional spectator. Christmas’  expression slowly evolves. She crosses her legs. Later, she checks her phone.

But it’s a tough contest and Greg Harris’ “Doing America” certainly had guests at last night’s opening reception wincing out loud. The large scale oil on canvas is a portrait of President Trump standing, open shirted, at his desk with a woman, naked except for the American flag draped around her shoulders, splayed across its mahogany surface with her fists clenched.

The large painting commands attention at the entrance and sets the tone for the show. Steve Suplee said “There is a little exclamation that everyone lets out when they come in this room.”

A wire portrait by Noah Saunders in front of paintings by Jacquelynn Faass in “Ringer” at ATHICA.

Disturbing details abound in this storytelling portrait, including the contrast between Trump’s artificially tanned face and the pink tumescence of his pink, squishy chest, his left nipple pushing its way over the placket of his white button down shirt. The way her breasts and pained expression echo his chest and his scowl are disarming. It’s disturbingly brilliant.

One viewer asked who the redhead was, wondering if she was a tabloid character from Trump’s checkered biography. I think she is intended to be anonymous, perhaps just the artist’s depiction of middle America getting screwed over. The artist avoided getting overtly political during discussions at the opening, allowing the work to speak to the individual viewer.

Works by Brooklyn-based artist Tommy Kha feel more introspective and evoke questions about identity and how we interpret ourselves.  “Assembly (I)” is a self-portrait of puzzle pieces, partially completed, which reveal the eyes of the artist.  The neutral background and muted colors lend it quiet mystery. “Buckhead (I)” is a vertical series of four images, reminiscent of a photo booth. In it, an extended forearm and hand hold an emotionless and disembodied face.

Joshua Bienko plays with the transformation of a pair of Christian Loboutin shoes in “Ever So Much More (Duchamp).”  The change is complicated and thought-provoking, given the hefty price tag of these high end shoes, which are painted and placed on a pedestal, altering their value as a luxury commodity in the process. According to English, “Louboutin signed the shoes after he saw the piece.” 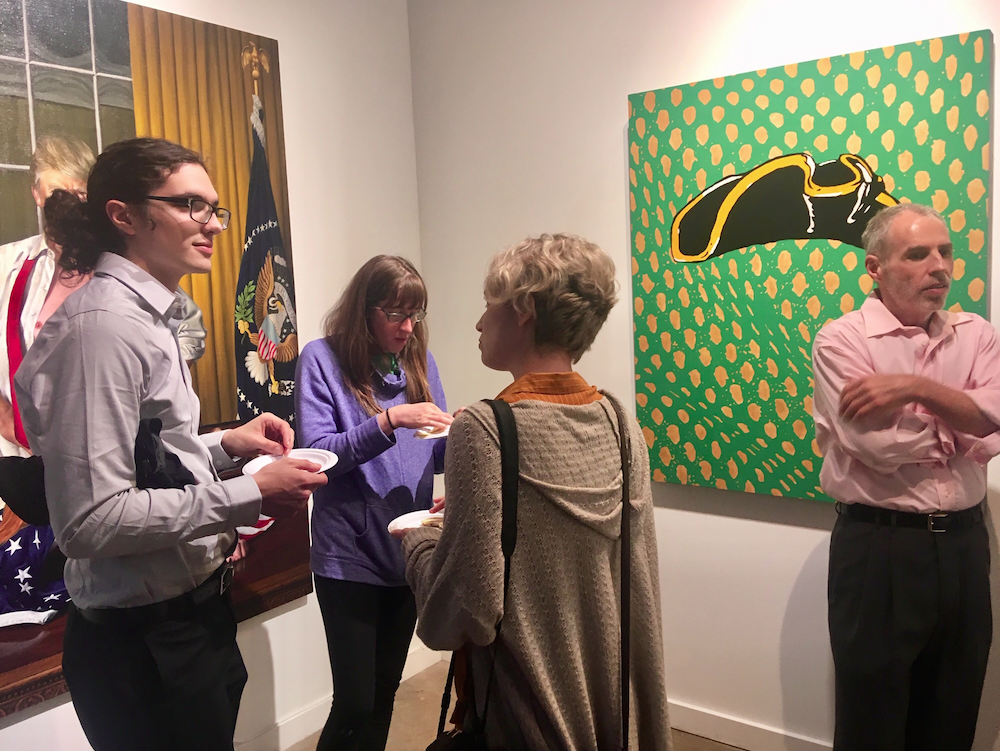 On the left, Greg Harris’ “Doing America.” On the right, Greg Harris stands in front of Shawn Campbell’s “The American Fabius.”

Broderick Flanigan contributes “Saltwork,” a portrait of Athens Clarke District 2 Commissioner Mariah Parker. It is one of the strongest pieces I have seen by this portrait artist to date. The site-specific work is created with salt on top of a folded black table and it sits on the floor.  According to curator John English, “You know, when the show is over you just pick up the table and go home. He thinks fo them as ephemeral.” Indeed, the fleeting nature of the work somehow contributes to its poignancy.

The variety of media contribute to the great success of this show. Thought-provoking and lovely to look at and explore, it addresses portraiture in a refreshing way. According to English, “Portraiture is changing, and I wanted to acknowledge that. It’s very exciting these days in terms of media, in terms of subject, and in terms of emotion.”

“Ringer: Contemporary Portraiture” will be on view at ATHICA through March 14, 2019. For more information including viewing hours, visit athica.org.