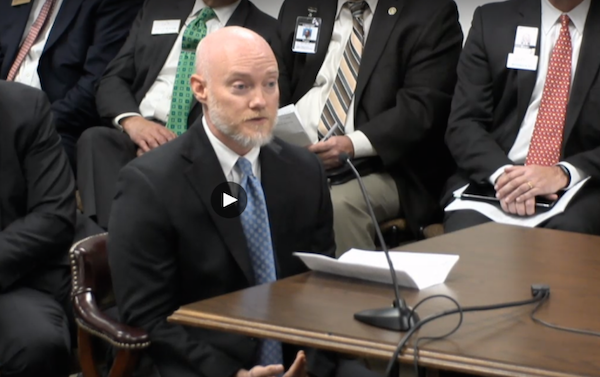 
A screenshot of Athens homebuilder Jared York testifying before the House Agriculture Committee.

The Agriculture and Consumer Affairs Committee of the Georgia House of Representatives voted 6-5 Wednesday morning to pass House Bill 302 prohibiting local governments from regulating building design of one or two-family dwellings.

The vote followed a discussion of more than an hour that was dominated by the building industry in the state, with speakers strongly favoring the bill and criticizing local regulations of residential housing.

One of the most outspoken of those who addressed the committee was Jared York, past president of the Athens Area Home Builders Association, who singled out Clarke and Oconee counties for criticism.

Representatives of the Georgia Municipal Association and the Association County Commissioners of Georgia spoke against the bill, as did Lilburn Mayor Johnny Crist. Lilburn is in Gwinnett County.

Oconee County Commission Chair John Daniell and Commissioner Chuck Horton attended the meeting and asked to speak, but Committee Chair Tom McCall called for a vote before they could do so.

The bill now goes to the Rules Committee, which oversees the flow of legislation and determines which bills will be debated and voted on by the House.

Daniell said the bill “will be a serious impact” on the county’s ability to make the recently adopted county Comprehensive Plan “a reality.”

Horton and commissioners Mark Saxon and Mark Thomas also criticized the bill as an attempt to circumvent home rule and thwart the concerns of citizens of the county.

Horton asked people in the audience to contact the county’s two representatives in the Georgia House stating their opposition to HB 302 in hopes of defeating it.

The commissioners will have another chance at their agenda-setting meeting this Tuesday night to publicly voice their opposition to HB 302. They are scheduled to consider a two-page resolution criticizing the legislation.

Houston Gaines and Marcus Wiedower, who represent Oconee County in the Georgia House of Representatives, say they were asked to join as sponsors of HB 302, but they declined.

The two said in a joint statement that “before supporting this bill, we want to fully understand the impact it may have” and that they will follow the bill “as it moves through the committee process.” Both are Republicans.

Spencer Frye, who represents Clarke County and is one of the bill’s six sponsors, said that the proposed legislation “is a consumer protection bill” that helps guarantee the rights of consumers “to low cost housing.”

Frye, who is one of two Democratic sponsors of the bill, said, “At the end of the day, this is a Republican bill,” and, “Being on the bill gives me an opportunity to help be part of the discussions if we need to change it.”