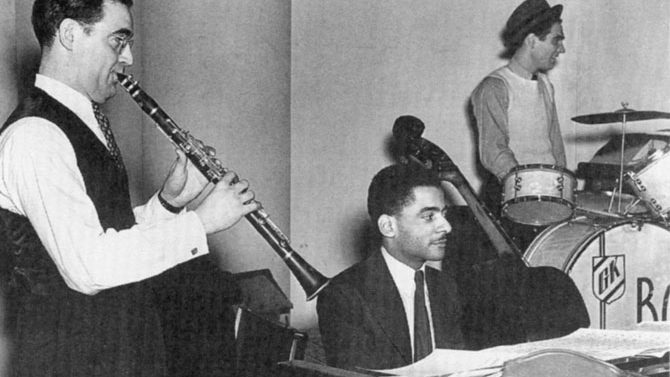 From Peace Corps volunteer to African-American literature professor to filmmaker, the career of Robert Philipson has evolved. But a constant thread has been the search for cultural similarities and differences between minority groups. Self-described as a Jewish queer, Philipson finds himself in “an interesting position vis-à-vis identity politics.”

In his film Body and Soul: An American Bridge, which will close this year’s Athens Jewish Film Festival, Philipson uses the beloved jazz standard as a means to explore the sometimes fraught and complicated relationship between African Americans and Jews.

The song, one of the most recorded in jazz, was written by Jewish composer Johnny Green in 1929. Performed by torch singer Libby Holman and many others, including Louis Armstrong, in 1935 “Body and Soul” helped smash the color barrier in popular music when it was recorded by the Benny Goodman Trio with black pianist Teddy Wilson at the keys.

The documentary has been featured at numerous Jewish and African-American film festivals. The filmmaker says, ”Different audiences focus on different things. Black audiences tend to focus on black things, Jews focus on Jewish things.” Scenes of interactions between, for example, Jewish managers and black performers show relationships that can be unequal and exploitative and, naturally, “black audiences’ radar tends to go up.”

Philipson, who describes his career as “a hobby that got out of control,” initially took a course in videography in order to film his father walking around the Chicago neighborhood where he grew up. But he was smitten with scriptwriting and other elements covered in the class. He completed his first professional video, Ma Rainey’s Lesbian Licks, in 2005. It played in 20 different film festivals.

“Music is one thing I’m interested in. I’ve learned to look at cultural production in a social context. A work of art is a work of art, but it also says something about the society out of which it comes,” Philipson says. “I have a particular fondness for the Great American Songbook. It’s music I grew up with.”

Philipson will spend some of his time in Athens researching entertainer Bob Cole for his next feature-length film. Says the filmmaker, “One of the benefits of my research in music is that I’ve been led to discover really interesting cultural corners in America.”