Workshop Offers Tips on Being a Movie Extra 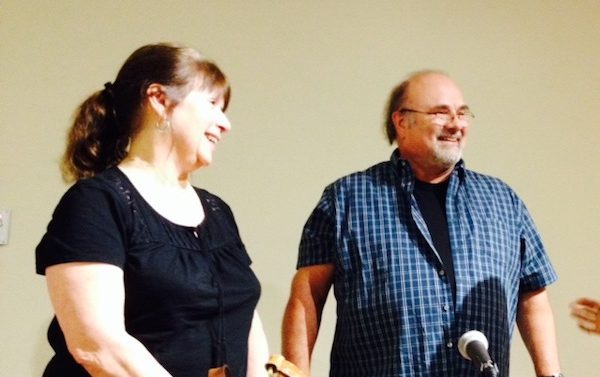 “I Want to Be in Pictures”, a workshop offered at the ACC Library on Thursday, May 29, offered a glimpse into life on the film set and provided tips on how to become and succeed as a movie extra.

Ted and Lois Brown shared their recent experiences working as extras on a number of movies filmed in Georgia. Danielle Robarge Rusk, director of Film Athens, and the ever engaging Madeline van Dyke also provided insights into the world of the film extra.

Van Dyke stressed the importance of the extra’s responsibility to “hold your place,” as scenes can be filmed repeatedly. She had this experience while serving as an extra in Clint Eastwood’s Trouble with the Curve. The scene she was in was shot at The Globe in downtown Athens and Justin Timberlake, a lead in the film, asked for lots of retakes. The reward for Van Dyke’s remaining stationary, in addition to $8 an hour and a surf-and-turf meal, was an “extraordinary experience.” She advised attendees, “Do it if you can.”

Ted and Lois Brown considered trying out as extras for awhile before a younger cousin, who has appeared in the background in multiple episodes of “Drop Dead Diva,” finally convinced them to take the plunge. The process led them to Facebook, where they suggest you “like” the pages of casting companies such as CL Casting and Extras Casting Atlanta; this can provide you access to casting calls. While casting calls will typically be for specific age ranges and body types, the keys to success, according to the Browns, are availability and dependability. You must be completely available for the range of dates in which filming of your scene will take place and you must be on time or you are out.

The Browns experience has included appearances in “Drop Dead Diva,” Identity Thief, Devil’s Knot, and The Spectacular Now. Ted Brown was considered a  “featured extra” in Devil’s Knot, because he was seen clearly and multiple times in his role as a juror in tense courthouse scenes.

They both stressed that while the monetary rewards of serving as an extra in films may not be much, the experience is worthwhile. Lois Brown shared that “it makes you appreciate going to the movies. Now I have to be sure I sit there until the last name goes across the screen… everybody [who works on the film] is important.”

Rusk added that while “there are career extras out there,” it is not a great way to get discovered as an actor—but it is a great way to get in there and see what it is like behind the scenes and can be “pretty cool.” Rusk offered lots of guidelines for potential extras, including “don’t make eye contact with the actors.” The reason for this is not celebrity arrogance, but that if something catches an actor’s eye while filming, it can pull them out of character and cause needless retakes.

With regards to films in Georgia, Rusk says “there are a lot of opportunities right now.”