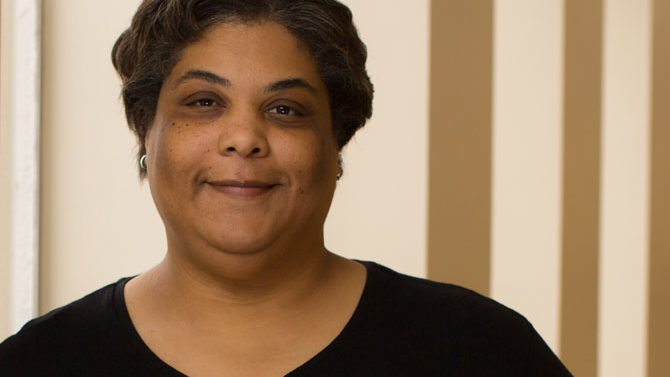 Hunger is a memoir about author Roxane Gay’s relationship with her body. It’s about the weight of her body and the weight of our expectations about it. It’s about a loving, happy childhood that ended after a devastating trauma at the age of 12. Gay’s body changed just like her life would, taking her down a path away from self-confidence and the fellowship of family and friends.

On paper, Gay is a winner: She attended Exeter and Yale, and is now an English professor at Purdue whose 2014 essay collection, Bad Feminist, was a New York Times best seller. She has written for Slate, Salon, The Nation, Time—you name it. She is currently writing the World of Wakanda comic book for Marvel, making her their first and only black female writer. She frequently appears on television to provide social commentary on feminism. She’s also 6 feet 3 inches tall and can be categorized as “supermordibly obese,” according to the widely accepted body mass index chart.

For many people, the latter sentence completely negates the accomplishments listed in the sentences before it. Gay knows, too, that the world values beauty over most other things, and that fatness is not considered beautiful. This becomes clear early in the book, during Gay’s initial post-puberty weight gain, because she was doing it on purpose. Gay did not want to be beautiful, because the only boy who had returned her affection raped her when she was 12, along with several of his friends. Her young mind was unable to understand that what happened to her was not her fault, so she blames herself. Specifically, she blames her body and the access to it that she’d once trusted this boy with. So she began to eat to make her body ugly, to protect herself, to become safe.

Her thin and sporty family is shocked and embarrassed by her weight gain, and soon correcting “the problem of her body” begins to earn more commentary from them than her academic feats. She’s sent to fat camp during summer break one year, where she mostly just ends up running the bases with the counselors, learning to purge and picking up cigarette smoking. She’s put on liquid diets and low-carb diets and SlimFast, some of which work, but the weight loss never lasts, because deep down she doesn’t want it. She seems to think that conventional beauty is not “meant for” her, and a smaller body is a more vulnerable body. Closeness to the beauty standard takes her further from safety, and she comes to relate to her size as a wall between herself and the world.

Gay was once a polarizing personality in the fat-acceptance community, mostly because of the incongruence between her responses to thin people’s comments on fatness and her own words about her own body. In her 2011 review/essay regarding Diana Spechler’s novel Skinny, she derided the author for positing that 30 pounds of excess weight constituted obesity, as well as its blatantly hateful perspective aimed at the morbidly obese. The book is set at a fat camp, and Gay took tremendous issue with a non-fat person portraying fat people as living isolated, solitary lives because they know no one loves them. Conversely, in Hunger, Gay actually seldom uses the common language of fat acceptance—“I’m beautiful the way I am”—because, even if that is her attitude towards the world, it’s not always her attitude towards herself.

A book like Hunger is hard for those who are used to people like singer Beth Ditto wearing spandex and flipping off paparazzi at 350 pounds, because Gay is not telling a story of triumph. Actually, that’s the first line of the book: “The story of my body is not a story of triumph.” We are accustomed to stories of the body being about triumph, usually in the sense that they will end with a massive weight loss that stays off for life. Another narrative we see a lot is that of the fat person who loves and accepts themselves exactly the way they are, or even the ex-model who now loves her thunder thighs and jiggly belly.

That is not Gay’s story. She’s been fat ever since her childhood ended in the woods at 12, and she’ll probably always be fat. She admits that freely. Gay is fat and unapologetically so, but that doesn’t make her less of a person or less of a woman, with the same desires for respect, adoration and intimacy that we all have. She has piles of clothes in her closet that she’d love to wear—colorful skirts and blouses with interesting cuts—but she always wears her “uniform” of slacks or jeans and a men’s button-down shirt, because her body is at its safest and blandest in this outfit. When she sits in the makeup chair for a photo shoot or TV appearance, she feels unworthy of such primping.

This is the Roxane Gay who has become the voice that women like myself seek out. I also have been a fat woman for most of my life. Up until a few weeks ago, I had no idea that my own experience with assault was so similar to hers, or that I wasn’t the only survivor who also prefers the term “victim” sometimes. I ate to hide my body after it had been violated, too, and though I finally understand that it was not my fault, I’m also still working on taking my body back and seeing it on my own terms.

Gay’s voice on fatness is valuable and unique because she is not afraid to admit that she doesn’t get it right every day, or even most days. Most of the time, it seems Gay does not feel pretty or like her fatness, but she’s allowed to feel that way and still accept her own fatness, and advocate for a world that doesn’t deride people’s bodies. In that respect, this book feels rare and priceless.