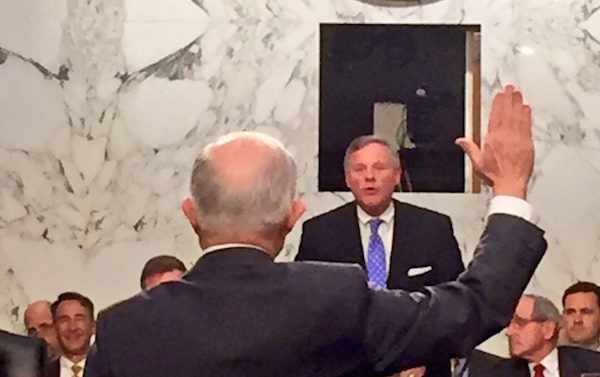 If you didn’t know, via obscure Latin etymology, that the word “testify” is related to the word “testicles,” you sure could have guessed it from watching Senate testimony pretty much any time ever, but certainly this year. (For what it’s worth in Rome, you swore on your balls to tell the truth.)

Back when now-Attorney General Jeff Sessions was in the middle of the confirmation hearings in which he seemingly perjured himself about contacts with Russian officials, Sen. Elizabeth Warren tried to read a letter Coretta Scott King wrote to the Judiciary Committee about Sessions into the congressional record. King wrote the letter in 1986, when Sessions was up for a federal judgeship. Though Sessions didn’t get the post because of his racist views, the letter never made it into the record, and Warren was trying to correct that.

Majority Leader MItch McConnell pulled out an obscure rule to censure Warren for impugning the character of a fellow senator. McConnell uttered the now famous phrases: “She was warned. She was given an explanation. Nevertheless, she persisted.”

Anther woman, a Code Pink protester named Desiree Fairooz, was arrested for inadvertently laughing during Sessions’ testimony. She faces a year in jail.

Then last week, when Deputy Attorney General Rod Rosenstein testified, Sen. Kamala Harris tried to pin him down with a yes or no answer on whether or not he would write a letter granting total independence to Robert Mueller, the special counsel investigating Russian interference in the 2016 election, she was interrupted by pre-twilighter John McCain. Harris pushed on and Richard Burr, the chair of the committee, asked her to show Rosenstein the courtesy of not answering her question.

Tuesday, at Sessions’ heated public hearing, McCain and Burr did the exact same thing, trying to shut Harris down when she tried to do her job—and their job, as well—and push for actual answers. But it was even more pointed this time, because numerous white male senators had pursued a similar line of questioning already.

Throughout the hearing, Sessions refused to answer questions about his conversations with the president, although the president has not invoked executive privilege, and such privilege is not open to Sessions. Again and again he invoked a non-existent privilege.

“Senator, I’m protecting the president’s constitutional right,” he told Martin Heinrich. But he did not cite any specific DOJ rules, although he continued to refer to an established set of policy as if it existed.

When Harris, the only woman of color on the committee (and one of very few in the whole Senate, for that matter), pushed him to cite a specific rule and not a general “principle,” Sessions kept going on about the principle.

“Sir, I’m not asking about the principle,” she said. “Did you not ask your staff to show you the policy that would be the basis for refusing to answer the majority of questions that have been asked of you?”

Before, Sessions could answer, Super Old White Man again jumped out of his mental fog phone booth to intervene. “Mr. Chairman, the witness should be allowed to answer the question,” McCain said.

Instead of telling McCain to shut the fuck up until it is his turn, Burr metaphorically caressed his balls and sided with McCain.

Sessions, who had already said that the speed of Harris’ questioning made him nervous, blathered on about the principle—because he didn’t seem to actually know a real policy or precedent to allow him to refuse to answer questions—until Harris’ time was up.

Sessions said earlier that he was not trying to stonewall, but his former colleagues in the senate helped him do precisely that. The same issue arose as the intelligence chiefs NSA Director Admiral Mike Rogers and Director of National Intelligence Dan Coats testified, though refusing to answer questions, last week. If there is no legal basis to refuse to answer a question under oath then you have to answer it.

But as much as that, it was a way for the good ole boys club of the Senate to preserve its own testicular privilege—as their colleagues worked out a secret health care bill sure to strip healthcare options from women—even if, in the sexist language these senators might understand, Sessions came off as a pussy, and Harris had the biggest balls of the them all.

Georgia Can Learn From Kansas’ Mistakes